Over the last ten years, Belgium has seen the share of renewables in its final energy consumption grow from 2% in 2005 to 8% in 2014. The country is still on track to meet its 2020 objective of 13%. However, because of political bad blood between the different regional and federal authorities, some doubts arise about whether or not Belgium can reach its overall goal. Michel Huart calls for an inter-federal energy vision and an effective collaboration between its different competent authorities.

The responsibilities of energy policy in Belgium are shared among the federal government and the three regions (Brussels, Flanders and Wallonia). The federal competence includes broadly all aspects relating to the energy supply of oil and natural gas, electricity grid up to 70 kV, nuclear matters, offshore wind in the North Sea and product norms. The regions manage the distribution of energy (electricity, natural gas) including prices, renewable sources of energy (except offshore wind energy), promotion of the efficient use of energy and energy R&D (except nuclear).

The main final energy use of the renewable energy is in the heat sector (46% in 2014). But the observed rising trends in Belgian renewable production is mainly pushed by the increase in renewable electricity capacity and the integration of biofuels in the distribution of road fuel. 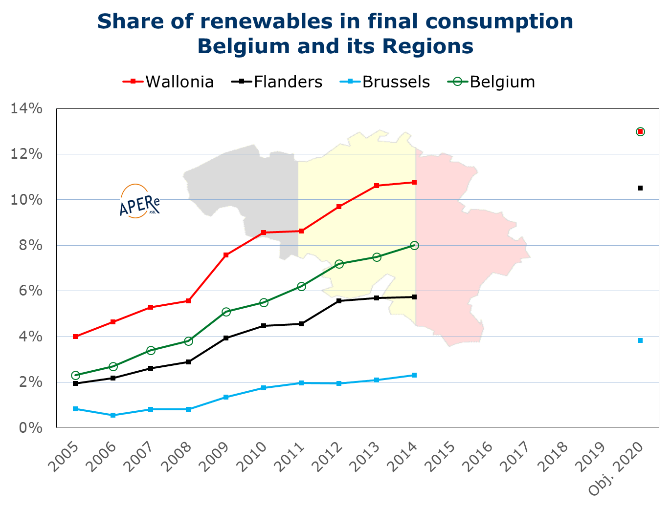 Fig. Share of renewables in final consumption in Belgium and its region. APERe

The renewable heat sector has seen a little upward trend, pushed by an increase in biomass use for household heating and by the valorisation of waste containing biomass in industrial processes and occasionally in district heating.

Driven by regional green certificate support schemes initiated in 2001, renewable electricity has seen a real increase in capacity production due to the growing number of onshore and offshore wind turbines, solar photovoltaic installations and biomass thermal electricity plants. Belgium occupies the fourth place of the EU-28 in 2015 with the highest wind offshore cumulative power capacity. Furthermore, onshore wind development has given rise to a large citizen movement of cooperatives: in 2015, 60 000 citizens had invested in renewable energy cooperatives shares (APERe estimation). 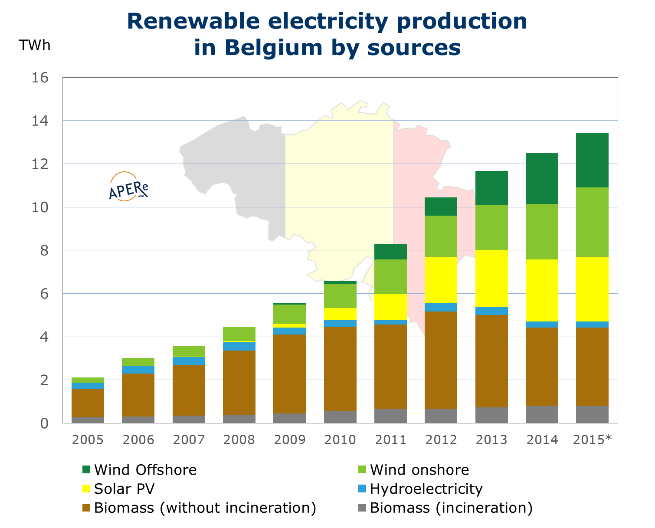 In 2009 the federal government started its support policy for biofuels: It exempted them from any excise taxes and forced fuel suppliers to increase the share of biofuels in the total volume of annual transport-fuel sales. Almost absent in 2005, it reached 4.3% in 2013, 6% in 2015 and, as of 2017, the share of conventional biofuels will be limited to 7% because of sustainability criteria.

In 2015 along with 195 countries of the United Nations, Belgium signed the United Nations 2030 Sustainable Development Goals (SDGs). As soon as June 2016, the Federal Planning Bureau (FPB) presented a first assessment of Belgium’s progress towards these seventeen SDGs. Renewable energy share and energy intensity are the two main indicators of one of them, the 7th SDG, for an affordable and clean energy.

Looking at the current trends, the FPB considers that meeting the SDG objective of 18% of renewable energy by 2030 would be feasible but doubtful (due to the lack of internal coordination of the energy policies), whereas the energy intensity reduction goal from 3.58 MJ/€ in 2013 to 1.95 MJ/€ in 2030 currently follows a very unfavourable trend: there is no sign of decrease in sight. Belgium has an energy-intensive industry, an energy-greedy residential sector and a scattered settlement which generates high needs of transport. The energy efficiency can be reasonably improved without impacting activities and comfort. But further results will only be achieved by changing social and technical norms, as presented in the FPB study “Towards 100% renewable energy in Belgium by 2050”:

“The pathways largely depend on political visions and societal choices that will affect the structure and content of the entire energy system and the way it is perceived”.

Speaking at the presentation of an IEA review of Belgium’s energy policies in May 2016, IEA Executive Director, Fatih Birol, encouraged Belgium’s federal and regional governments to work decisively together and to take jointly a long-term approach to the country’s energy policy. For instance, the IEA pointed out the 2003 federal government decision to phase out nuclear which is still waiting for a “Belgium Energy Pact” after more than 13 years…

The country’s internal lack of collaboration between regions is shown again in the infamous “burden sharing” of the renewables energy target. The Belgian 2020 target of 13% by Directive 2009/28/EC is allocated between the different regions and the federal offshore territory. After 6 years of discussions, an agreement was found on the 4th of December 2015, just in time for the COP21 in Paris. The implementation discussions are still ongoing today, with a final cooperation agreement expected for end of October 2016. No doubt that the different political colours of the different government levels do not help in this matter. An overarching energy vision could help to overcome the divide between the competent levels while making Belgium fit for a more sustainable future.

Michel Huart is a scientific advisor at Belgian renewables association APERe, and a lecturer at the Université Libre de Bruxelles