Minnesota’s 2025 Energy Action Plan is an ambitious attempt to increase renewable energy and strengthen the state’s economy. It could also serve as a model for other states in the region to work on reducing emissions and advancing local solutions.

For decades, Minnesota has been a leader in energy innovation, beginning in 1980 with its Conservation Improvement Program Statute, through its 2007 Renewable Energy Standards, and continuing today with its community solar gardens. Now, Minnesota is well positioned to expand its leadership in the Midwest and, increasingly, the rest of the nation. The newly released 2025 Energy Action Plan lays out a path to enable the state to meet its ambitious renewable energy and energy efficiency goals, while further developing Minnesota’s leadership in energy and strengthening the state’s economy.

The 2025 Energy Action Plan was developed by Rocky Mountain Institute, Great Plains Institute, and engineering consultant LHB, in partnership with a Stakeholder Advisory Committee, for the Minnesota Department of Commerce – Division of Energy Resources, and the Legislative Energy Commission. Energy Systems Consulting, the Minnesota Environmental Quality Board, the Minnesota Pollution Control Agency, and the U.S. Department of Energy provided additional project guidance and contributions.

Minnesota has no indigenous fossil fuel reserves and fully 72 percent of its energy is imported. However, the state does have abundant renewable energy resources. These make up an increasing share of the state’s energy mix, with 21 percent of electricity coming from renewables in 2015.

Minnesota’s energy consumption has remained relatively flat in recent years, even in the face of population growth. Minnesota’s per capita energy consumption ranks 18th nationally—despite having the third-coldest winters in the country—and per capita fossil fuel use is now lower than the national average, after declining from 2005 to 2013 by 13.5 percent. However, while the state’s greenhouse gas emissions decreased slightly from 2012 to 2015, total emissions are expected to exceed the state’s goals for 2015 and 2025 levels. 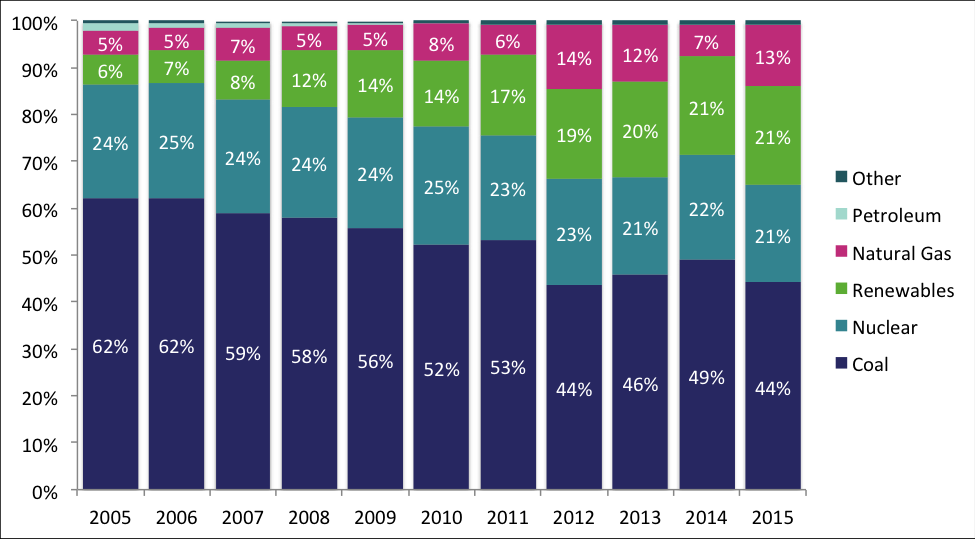 Minnesota’s energy landscape has already begun to change and is expected to continue to evolve under the influence of the following factors:

Transportation: In 2014, Minnesotans spent $11 billion on transportation fuels, the majority of which were imported from out of state. A significant opportunity exists to keep transportation fuel dollars in Minnesota and increase the sector’s clean energy footprint. Stakeholders’ strategies focus on electric vehicles and alternative fuel vehicles, which can reduce the total fossil fuels used for transportation while taking advantage of Minnesota-sourced energy, such as renewable electricity and biobased fuels.

Energy supply and grid modernization: Electricity generation in Minnesota accounts for 29 percent of total energy use in the state, with 44 percent of the energy used to produce electricity coming from coal. In order to promote local energy resources and keep additional energy dollars in the state, Minnesota can effectively integrate additional clean energy resources onto the grid and establish pricing signals that more accurately capture the cost of electricity generation. Stakeholders’ strategies focus on grid modernization and pricing and tariff structures, which can improve the ability of the grid to accommodate renewable and/or distributed generation and reduce fossil fuel use.

Efficient buildings and integrated energy systems: Residential and commercial buildings account for two-thirds of the state’s electricity use and more than half of the natural gas delivered in the state. Minnesota has already demonstrated national leadership in and progress toward an energy-efficient building stock. This section focuses on adopting SB 2030 as an optional stretch code for new buildings, additions, and major renovations; improving energy data access for customers; adopting benchmarking and disclosure programs; improving building operations; promoting behavioral efficiency strategies; and advancing integrated energy systems through thermal grids and combined heat and power (CHP) development. These strategies offer a pathway toward lower energy intensity in the state’s existing and to-be-built building stock.

Industrial and agricultural processes: Minnesota’s industrial and agricultural sectors contribute significantly to the state’s economy, and account for 34 percent of the state’s energy use. Minnesota has been a national leader in bioenergy development, and industries have made progress toward increased energy productivity. This section focuses on strategies to promote bioenergy and to reduce wasted energy and promote a clean energy focus in Minnesota’s industries, taking advantage of existing leadership in the state while further improving the energy performance of these sectors.

Local planning and action: Leading local governments and tribal nations in Minnesota are demonstrating that it is possible to make progress toward a cleaner, more resilient energy system at the local level, for example, through voluntary participation in challenges around best practices. Understanding that many changes start at the local level, stakeholders identified strategies to advance local energy planning and pursue near-term actions at the local level.

The 2025 Energy Action Plan identifies strategies to capture the opportunity Minnesota has to make progress toward existing goals, develop a competitive advantage in the clean energy industry, and advance Minnesota’s leadership in the region and the nation. As state- and national-level clean energy trends accelerate, Minnesota can act now to capitalize on its ongoing clean energy initiatives; leverage local renewable natural resources; drive growth in an important sector of the state economy; and advance a clean, reliable, resilient, and affordable energy system for all Minnesotans. Other states wishing to pursue a clean energy future may look to the Minnesota 2025 Energy Action Plan as a replicable model for using a consensus-driven stakeholder process and advancing near-term opportunities.

This article was written by Mark Dyson and Christa Owens Michelet. It has been republished with permission from the Rocky Mountain Institute.