We have created a slew of new charts in the annual update of this website. Today, Craig Morris focuses on two of them concerning power prices and so-called energy poverty.

Main Street in Lake Mills, Iowa; 7% of households in the state had their power shut off in 2015 (Photo by Brandonrush, edited, CC BY-SA 3.0)

Recently, I had dinner with a group of North Americans who had come to Berlin to see what they could learn from the German energy transition. A Canadian expressed his concern that “Germany has hundreds of thousands of people who cannot pay their power bills.”

“The exact number is around 350,000,” I answered, “and we know this because the country’s Network Agency publishes the figure every year.” I then asked the group whether that number was high or low. For instance, how many households in Canada or the US had their power cut off for failing to pay the bills?

As we pondered the irony of energy experts not knowing statistics about their own countries that they know about Germany, I put the numbers into context. “That’s 0.9 percent of the 39.9 million households in Germany.” Still, how does that performance stack up internationally?

The visitors to Germany did not know because other countries don’t always publish their statistics. Whenever the US press reports on such matters, we get a hodgepodge of numbers from particular utilities. Usually, we are only provided with the number of households affected (such as 70,000 in Memphis over eight months) without any indication of the percentage. Another example: 91,000 households in Iowa (equivalent to seven percent of all households in the state) received disconnection notices in the fall of 2015. There are  on “energy poverty” for the US as a whole.

Judging from this article, Canada does not collect official statistics either (but please drop us a link in the comment box below if you know better). We simply know that a bank survey of Canadian households with incomes of at least 50,000 CAD found that 40 percent had trouble paying their monthly energy bills at least once in 2014. That’s not the same as having your power disconnected, of course, but the numbers tally roughly with Australia as well—and again, the statistics are based on a survey, not official government data.

The best comparison I know of is from Eurostat, and it makes Germany look quite good indeed. Here, we see the number of households unable to pay monthly energy bills (not just electricity) on time. The US protects its poor less, with utility firms sometimes cutting people off when they are only 30 dollars behind—and then charging hefty sums for re-connections, up to five times more than in Germany. Furthermore, while prices may be higher in Germany, bills are not necessarily, because North Americans consume so much energy. 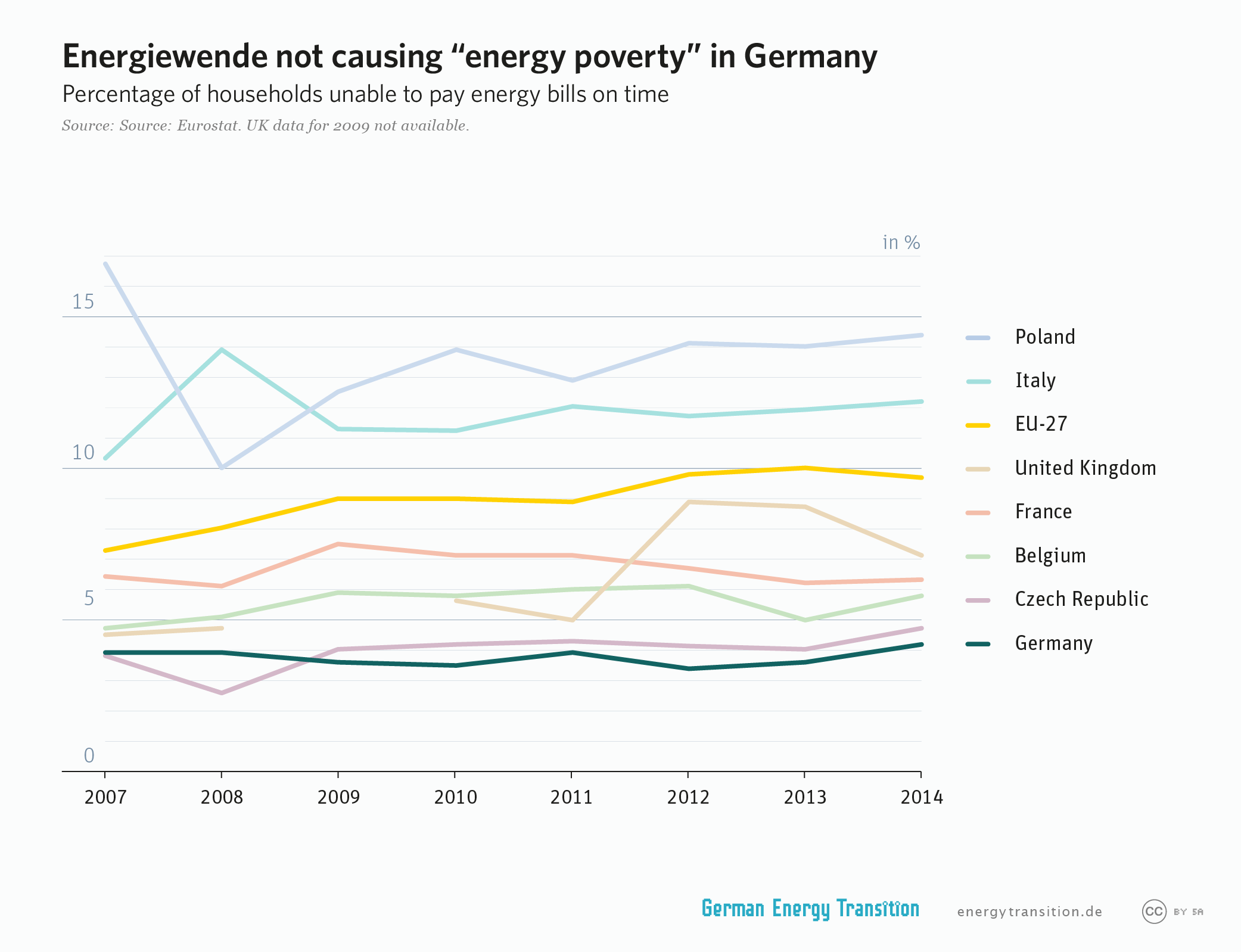 There are many other countries in the original data set here, but we focused on this group to improve readability. Germany is not the leader in the entire list; it comes in seventh out of a list of 33 countries for 2014. The only countries to perform better were the usual Nordic and Germanic places with strong economies and welfare systems: Switzerland, Austria, the Netherlands, Norway, Sweden, and Luxembourg.

In 2014, 4.2 percent of German households were in arrears on their monthly utility bills at some point, but only 0.9 percent actually had their power cut off. Numerous parameters are at play here in addition to the price of electricity. For instance, France prevents its utility firms from cutting off power, gas, and electricity to people who cannot pay. Obviously, welfare—and more generally, protections for the poor—play as great a role as power prices. In addition, no articles I have seen on alleged “energy poverty” in Germany have ever pointed out that practically all disconnected households got power again after just a few days.

It’s also important to remember that electricity prices alone are only part of the picture. Since 2000, they have doubled, but overall the cost of natural gas and heating oil have risen even more since 1990, as the following chart shows. 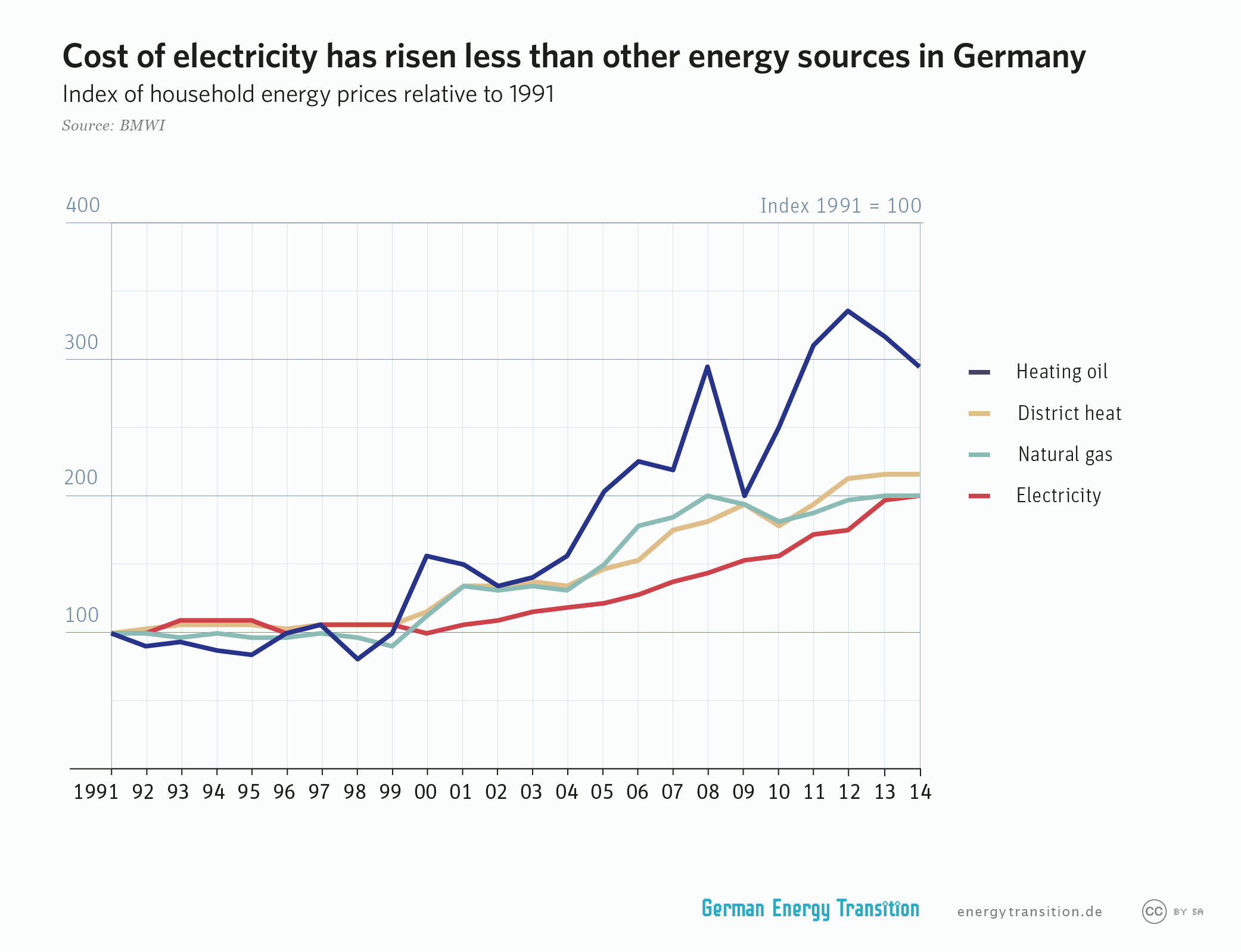 In the end, it’s crucial to understand why I keep writing “energy poverty” in quotation marks—it does not need to exist as a term. It is only a subset of poverty, which needs to be the focal point of social policy. High energy prices are good in that they incentivize conservation and efficiency. The poor need to be protected from these high prices to some extent, but that falls in the domain of social policy. Low energy prices should not be the goal of energy policy.