Today, Craig Morris covers the last major new chart in the update of our e-book for 2016. It shows that the worst is over in terms of job losses for coal power—and that there are already far more jobs related to renewables. What it doesn’t show is that Germany will fail to reach its 2020 target for green jobs by a wide margin.

Ende Gelände protesters call for a coal phaseout, but have been met with great resistance (Photo by Paul Wagner, edited, CC BY 2.0)

There’s good news in the battle against coal power in Germany. Just a few years ago, proposals for a coal phaseout met with great resistance, but this year the question is not whether Germany will leave a lot of its coal resources in the ground, but by when—2030 or 2050?

Three main groups have pushed back forcefully and largely successfully against the call for a coal phaseout: owners of coal assets, energy-intensive industry (which wants a reliable, inexpensive energy supply), and labor unions representing miners. But as our new chart below shows, the worst is already behind us in terms of job losses in the coal sector. The last major reduction came in the 1990s, when the decrepit East German coal industry was forced to become competitive on a global market overnight. The process was extremely painful for many communities, many of which have not recovered even today. But the downward slope continues unabated up to the present. 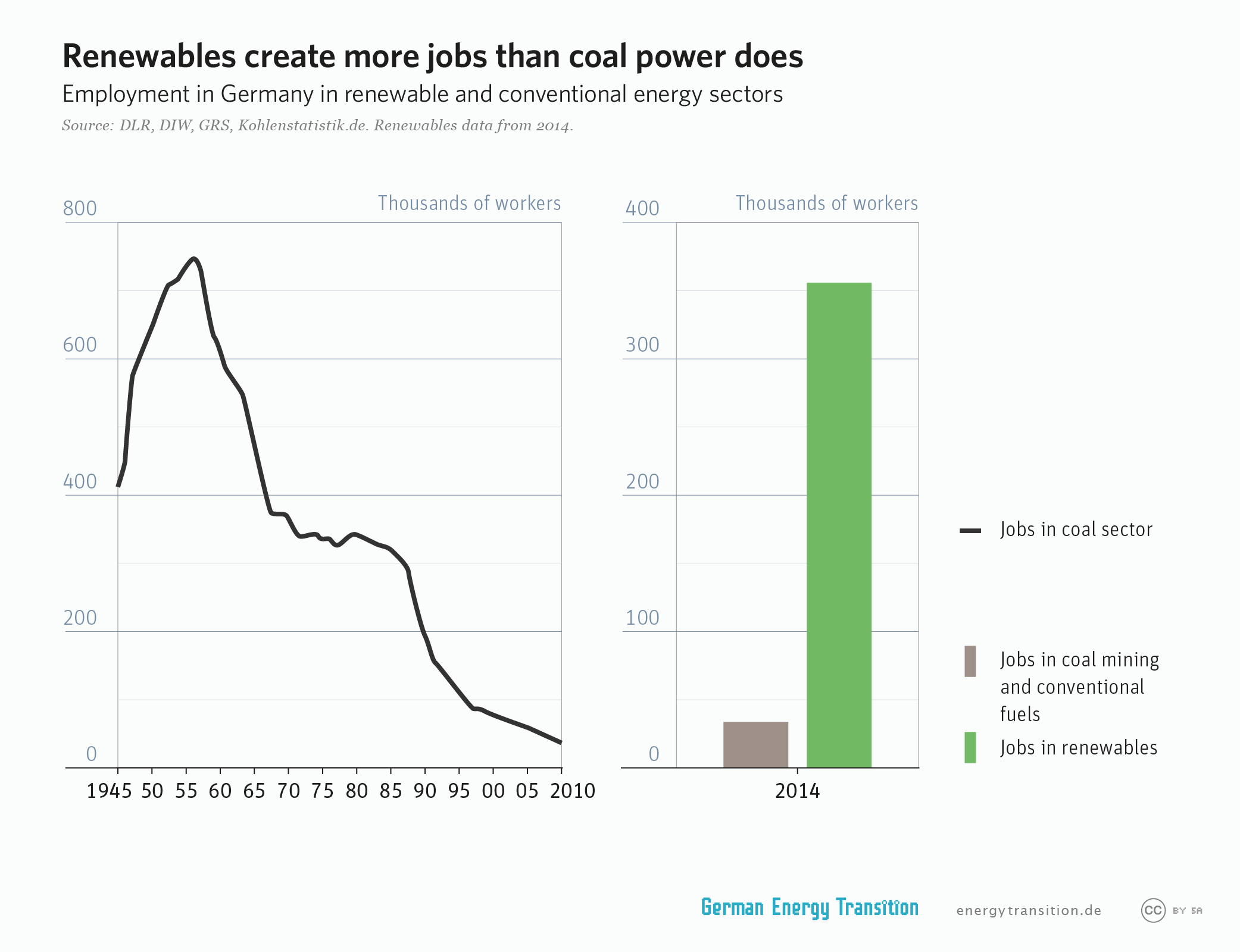 One reason is the phaseout of subsidies for hard coal miners. For decades, Germany provided these workers with special payments because German hard coal was not competitive on the global market. The reasoning was that these workers would have received unemployment benefits anyway, so why not pay them to continue working and simultaneously enjoy the fringe benefit of greater energy security from a domestic source?

The UK, whose hard coal was also on competitive globally, went down a much different path in those years; Prime Minister Thatcher broke the unions’ resistance and opened up the British coal sector to global competition. One could debate which path, the British or the German, was better. But the outcome in both countries clearly shows that a coal phaseout not only benefits the climate, but also has detrimental effects on former coal communities. No one has found the silver bullet for this dilemma.

The last subsidies for German hard coal miners will be discontinued in 2018, leading to further job losses. And it is worth noting that Germany probably would not have gone down this path without persistent insistence from Brussels. But at least Germany has some experience with structural change, defined as the transitioning of a fossil-based economy to a more future-proof one.

Coal workers will not all receive green jobs

Next to go will be lignite. The chart above would seem to suggest that all of these workers can easily find a green job. Unfortunately, German experience clearly shows that they rarely do. Some jobs will not be nearby anyway, so the communities themselves see unemployment rates rise even as populations dwindle.

Going forward, few additional renewable energy jobs are likely to be created. Germany once had a goal of 500,000 green energy jobs by 2020. After peaking at just below 380,000 a few years ago, the number is now approaching 350,000. More sophisticated analyses have investigated the net impact—in other words, how many jobs are lost for each one created (spoiler: the impact is slightly positive). But for the rest of this decade, Germany will struggle to keep the number of green jobs above 350,000 as the government dramatically slows down the transition.

The main takeaway here is that climate campaigners have to address the real-world concerns of people who may not come out on top during the transition. Several degrees of warming by 2100 may sound scary, but not nearly as much as long-term joblessness just a few years from now.

So overall, the worst is indeed behind us—if we take “us” to mean German society as a whole. But 20,000 people and their families currently find themselves employed in a doomed sector. Their concerns must be addressed.

At the same time, we must also recognize that the concern about coal workers is great partly because they are so well unionized. There will be other losers during the energy transition as well, and not all of them are so well represented. For instance, Germany currently has around 14,500 filling stations (down, incidentally, from 46,000 in 1970). Almost none of those will exist if we soon all have electric vehicles—by 2030 or 2050?