In March this year, Vietnam’s government released its revised Power Development Plan VII, indicating how the country would meet its electricity needs between 2016 and 2030. The plan contained good and bad news. What Vietnam really needs is a electricity plan, suitable for the 21st century, Nguy Thi Khanh claims.

With the right incentives and the political will in place, Vietnam could power its electricity grid with power from the sun, wind, agricultural waste and micro hydro. (Public domain)

In January this year, Vietnam’s former Prime Minister, Nguyen Tan Dung, announced he would “review development plans of all new coal plants and halt any new coal power development”. Such a strong statement was heralded as an indication that the country with the third largest pipeline of coal plants globally was moving away from coal.

Two months later, the government released its revised Power Development Plan VII, indicating how the country would meet its electricity needs between 2016 and 2030. The plan contained good and bad news.

The good news is that the government eliminated 23 gigawatts (GW) of new coal plants from their plans. That means about 23 large coal plants won’t be built in Vietnam. This is equivalent to the entire coal generating capacity of Australia, a heavily coal-dependent nation. The plan also has the goal to “increase the proportion of renewable electricity for the purpose of reduced dependence on imported coal-fired electricity.”

Yet the plan did not halt all new coal power developments as promised by former Prime Minister Dung. Indeed, were this plan to be followed, another 45 GW of new coal plants would still be built in Vietnam – that’s 15 GW currently under construction plus another 30 GW in the planning phase. By 2030, the government aims to have 55 GW of coal in operation, which is equivalent to the entire electricity generating capacity of Germany today!

The following graph illustrates just how much coal the government is planning to add to the system between now and 2030. Total installed capacity from all electricity sources is projected to be almost 130 GW, with more than 42% of that coming from coal. 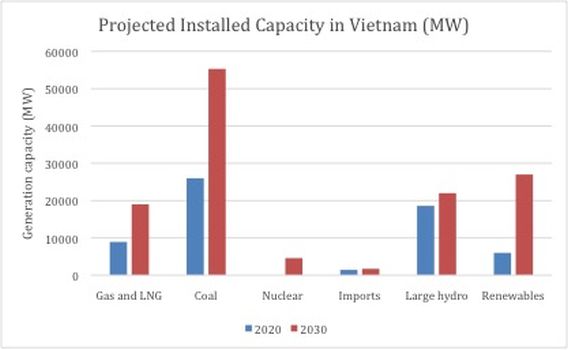 While the installed capacity of renewables (small hydropower, wind, solar and biomass) is projected to be 21% of total installed capacity by 2030, when you look at actual generation data, the reality is that coal would represent more than 53% of electricity generated in Vietnam by 2030. 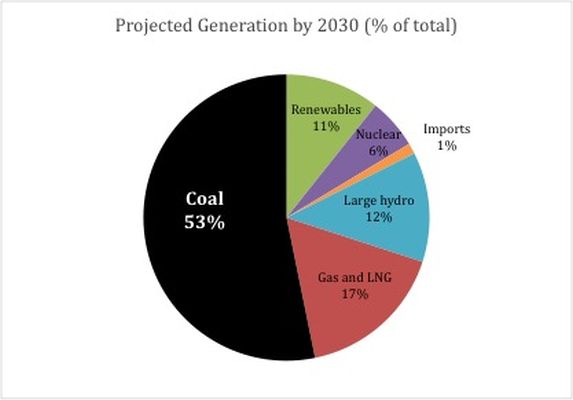 This is bad news for our climate. According to the Intergovernmental Panel on Climate Change and a recent study by Oxford University Martin School, to meet the goal of limiting global temperature increases to 2 degrees Celsius, all new electricity generation assets from 2017 onwards must produce zero carbon. That means any coal plants built after 2017 will push us beyond 2 degrees Celsius of global warming.

Most recently, Jim Yong Kim, President of the World Bank, stated in the 2016 Climate Action Summit: “if Vietnam goes forward with 40 GW of coal, if the entire region implements the coal-based plans right now, I think we are finished…That would spell disaster for us and our planet.”

Global temperatures have already risen by 1 degree Celsius since pre-industrial times. 2015 was the hottest year since record-keeping began in the 1880s and the first three months of 2016 have already reached new highs.

As a result we are seeing unprecedented droughts in South Vietnam, India and California. Australia’s Great Barrier Reef is going through its worst coral bleaching event ever, with about 50% of the coral already dead. A record amount of the Arctic Ocean also never froze this winter.

Scientists are saying that climate change is happening faster and more seriously then they ever imagined. And the burning of coal is responsible for about 40% of the dangerous greenhouse gases responsible for global warming.

The Vietnamese government is a member of the Climate Vulnerable Forum, the group of countries that heavily advocated for limiting temperature increases to 1.5 degrees Celsius at the Paris Climate Conference. If the Vietnamese government is serious about meeting the 1.5 degrees target, it is clear that there is no room for any new coal plants anywhere, not just in Vietnam but also in the world, and we must rapidly phase out existing coal plants.

The Vietnamese government should be developing an electricity supply system for the future, not one from the past. The government’s revised Power Development Plan includes a goal of 8 GW of installed wind capacity by 2030 and 12 GW of solar capacity by 2030. These are extremely modest goals. 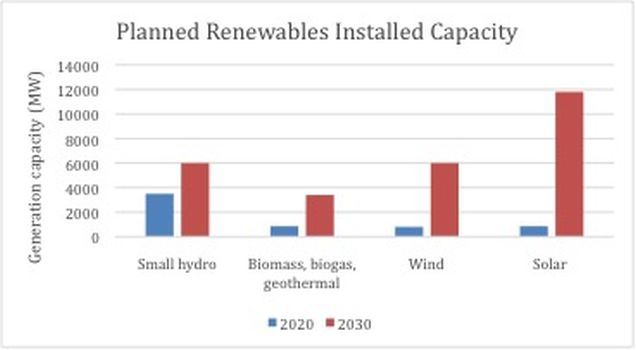 Many countries in the world are installing this much wind and solar in one year. India plans to add 12 GW of solar in the coming year, and solar is now cheaper than coal in some parts of India. An 800 megawatt (MW) solar plant is about to built in Dubai for just under 3 US cents per kilowatt hour, which is cheaper than any other form of electricity in the world.

In 2015 alone, the US added more than 8 GW of wind capacity, more than what the Vietnamese government plans to do in the next 15 years. Wind is now the cheapest form of new electricity in the US. China alone added 30 GW of wind power in 2015, and wind is now cheaper than coal in many parts of the world.

Vietnam is well endowed with renewables resources. With the right incentives and the political will in place, Vietnam could power its electricity grid with power from the sun, wind, agricultural waste and micro hydro.

Right now the only thing that is stopping us from getting there is an allegiance to the electricity model of the 20th century, one based on climate-vulnerable hydropower and large centralised coal plants.

What Vietnam needs is a 21st century electricity plan.

This article was first published at www.RenewEconomy.com.au and is republished here with permission.