On Thursday and Friday last week, the German Foreign Office invited dignitaries, business people, and the press to the second Berlin Energy Transition Dialogue. The event was roughly 50 percent larger than in the previous year. And once again, it revealed that not all decision-makers are on the same page when it comes to the global energy transition. Craig Morris explains. 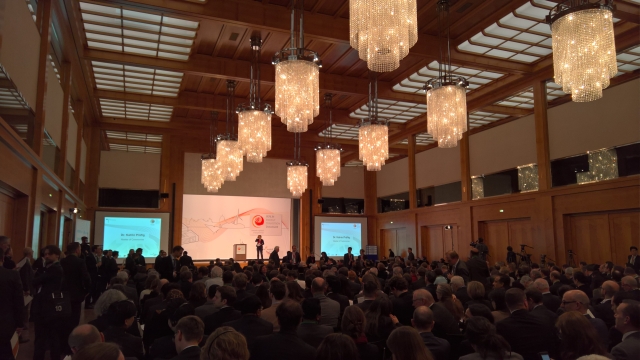 Last year, the Energy Dialogue drew some 900 visitors, roughly twice as many as the organizers originally hoped for. This year, 1,300 people came. The main hall was bursting at the seams, so the discussions were streamed on large screens in adjacent rooms. Photo: Craig Morris.

Anyone still wondering whether “Energiewende” has become a standard term in the global energy sector probably stopped doing so last Thursday. Indeed, the word “Wende” (the “transition” part) is taking on a life of its own. For instance, the Polish deputy energy minister spoke in Berlin of three priorities for the energy transition going forwards: a grid “wende” (Poland complains about loop flows from Germany), a transport “wende”, and a market “wende”.

The market part was clearly on display at the conference. Undersecretary Rainer Baake praised the German government’s implementation of auctions, in which markets set prices but the government sets the volume – and the German government is using the policy to slow down renewables in the power sector. Not everyone is happy about this policy, but another aspect deserves mentioning: framing “markets” as the opposite of the level playing field that used to exist between newcomers and incumbents in Germany. As long as the “market” is equated with auctions, that level playing field is equated with governmental intervention – whereas governments setting volumes in auctions somehow is not.

On the other hand, there is no doubt that markets are pushing wind and solar around the world at present. The question is whether this growth will continue without policy support when renewables reach high levels of penetration.

And then there is the much needed transport “wende”: up to now, the energy transition in Germany has largely been an electricity transition, but it seems that transportation is moving up on the agenda. Rumor had it at the conference that the German government and perhaps the German automotive sector itself might be interested in using Dieselgate as an opportunity to bring the “wende” to the German car sector. NGOs certainly hope so, but we await specific signs from government and industry decision makers. The NGO Green Budget Germany also held a conference last Friday about greening the transport sector, and one speaker was the new head of Agora Verkehrswende (transportation wende), a think tank founded in January that will focus on the transport transition based on the model of the think tank Agora Energiewende (it does not yet have a website).

Organized by the German Foreign Office, the Berlin Energy Transition Dialogue was a top-level event. Hundreds of governmental representatives from around the world attended. For instance, the delegation from Vietnam was quite large. Just six weeks earlier, the country’s Prime Minister announced plans to step away from coal power and switch to renewables and natural gas.

As this example shows, not everyone is convinced that renewables alone is the path to be pursued. Natural gas was mentioned several times, and the delegate from Saudi Arabia caused quite a commotion when he claimed that “fossil fuel is not so bad.” Numerous governments also remain committed to nuclear power.

Finally, the German government awarded Amory Lovins its Order of Merit. I am proud to say that I played a small part in the award; my blog post from last April explaining that Lovins work on “soft energy” inspired German Energiewende thinkers was included in the submission for his award. Lovins, who had just flown in from India, gave an impressive presentation on the global situation, covering a wide range of topics from transportation to solar and efficiency.

Perhaps most importantly, Lovins filled a gap left behind by all of the governmental and sector experts. By the time he gave his acceptance speech on Thursday evening, Energiewende supporters yearned to hear some acknowledgment of the grassroots commitment to the energy transition over the past four decades. Lovins gave them that acknowledgment – and gave them back the word “market,” stating in his acceptance speech:

“the amendments of 2014 have constrained much of this progress, shifting choice and market power from citizens and communities back to large energy companies.”

Lots more material was covered, of course. If you want to get an idea of other issues discussed in Berlin last week, Alice Stollmeyer has Storified her tweets. Most of all, the conference gave everyone a good overview of what decision makers from various parts of the world associate with “energy transition” – and of the disconnection between these decision makers and the general public.