Utilities that invest heavily in renewables outside of their territory often show little interest to do so at home. Craig Morris takes a look.

In 2014, NextEraEnergy claimed to be the “world’s largest generator of renewable energy from wind and the sun.” (Photo by Brian Robert Marshall, modified, CC BY-SA 2.0)

A recent article in Rolling Stone focuses on the “Koch brothers’ dirty war on solar power,” as the title puts it, especially in Florida. But the two billionaires should not be the only focal point. The role of big utilities deserves greater scrutiny.

Florida Power & Light (FP&L) has been a major driver behind large wind projects across the US for many years. In 2009, it was “America’s no. 1 producer of wind power.” In 2014, its parent company NextEraEnergy claimed to be the “world’s largest generator of renewable energy from wind and the sun.” But most of its investments in renewables were made in areas where it does not have competing assets: California, New Mexico, Nevada, New Jersey and Ontario. At home in Florida, FP&L is part of the massive pushback against residential solar, helping to ensure that the Sunshine State continues to get roughly 5/6 of its electricity from natural gas and coal – and less than one percent from solar. Citizens in Florida do not have the right to sell any electricity they generate, and firms offering third-party ownership – such as SolarCity – cannot do business in the state. “It’s no secret that we play an active role in public policy,” an FP&L spokesperson is quoted in Rolling Stone.

The lesson here should be clear: utilities often build renewables in new areas in order to enter new markets. Germany’s utility E.On is behind a massive 782 MW wind farm in Roscoe, Texas – and also behind the world’s largest offshore wind farm, the 630 MW London Array. Yet, the firm had only 213 MW of wind power capacity installed in all of Germany – its home market – at the end of 2014.

Germany’s RWE and France’s EDF are other examples of utilities that do an astonishing amount of business with renewables abroad relative to their investments in green electricity at home. EDF just announced (PDF) its 2015 results, and the company built more than a gigawatt of new renewables last year alone – “mostly in Canada and the US.” Only a seventh of its wind power capacity is in France. Go to the website of German utility RWE’s Innogy, the group’s renewables subsidiary, and you are immediately presented with a picture of the Gwynt Y Môr project – in Wales. At the end of 2014, the latest data that RWE Innogy has made available (PDF), the firm had slightly more renewable energy capacity in the UK than it did in Germany, with the German capacity including roughly 40 percent hydropower, which the company already had anyway. 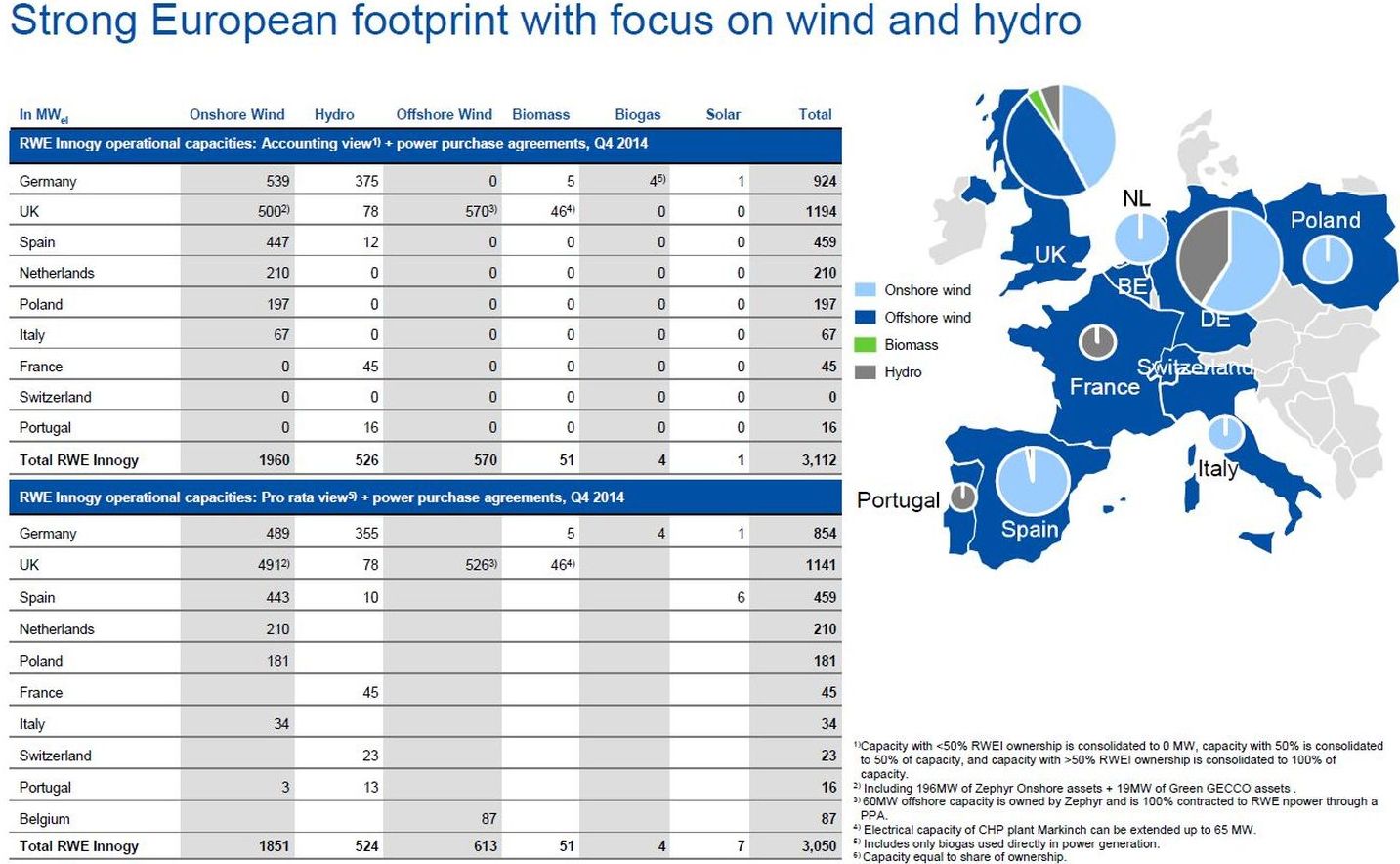 RWE’s renewable energy assets across the world. Less than a third is located in Germany, and 40 percent of that is legacy hydropower. Remove hydropower, and RWE’s renewable assets in Germany make up only a fifth of the company’s total. Source: RWE

Back in 2003, RWE stated the following in its sustainability report:

“RWE’s main thrust is in the UK, where it is focusing on onshore and offshore facilities since geographic conditions and wind resources are more favorable in this region…. This would not have been possible in Germany.”

The report fails to mention two things. First, it wasn’t just that the UK site had great wind conditions, but the UK was also paying much more for that wind power despite the better conditions; at the time, Germany did not even have separate, higher feed-in tariffs for offshore wind. And second, investments at home impact existing assets; investments abroad, not so much.

About wind power in general, RWE’s 2003 Sustainability Report reminds readers that “each country will have its own economic and environmental limit.” I couldn’t find a mention of any limits for fossil fuels or nuclear energy, but I’d wager that you can find such discouraging remarks about renewables from any major utility. In 2013, the CEO of RWE Innogy told me that solar in Germany doesn’t make sense. Here is FPL on solar:

There’s so much wrong about that, I don’t even know where to start. PV is the only power technology that needs no extra space (existing rooftops), no one is proposing CSP (which may consume water) in Florida (which is slipping into the ocean and does not lack water), and no technology has seen its price plummet “over the past few years” as much as PV.

And here’s the scary part: FPL’s parent company, NextEra, aims to take over a major Hawaiian utility. Hawaii currently has the greatest solar penetration in the US. What will the impact be?

Utilities are building giant wind and solar projects everywhere, but largely in competitor territory, not their own. And they see community projects built by citizens as a threat within their own turf. Corporate utilities don’t want their own investments in renewables competing with their existing conventional energy assets, and they don’t want yours either.