We recently wrote about record wind power production in 2015, which was partly due to windy conditions. But a lot of new capacity was also added. Unfortunately, the rush reflects the storm before the calm; the onshore sector in particular fears the switch to auctions. Craig Morris explains. 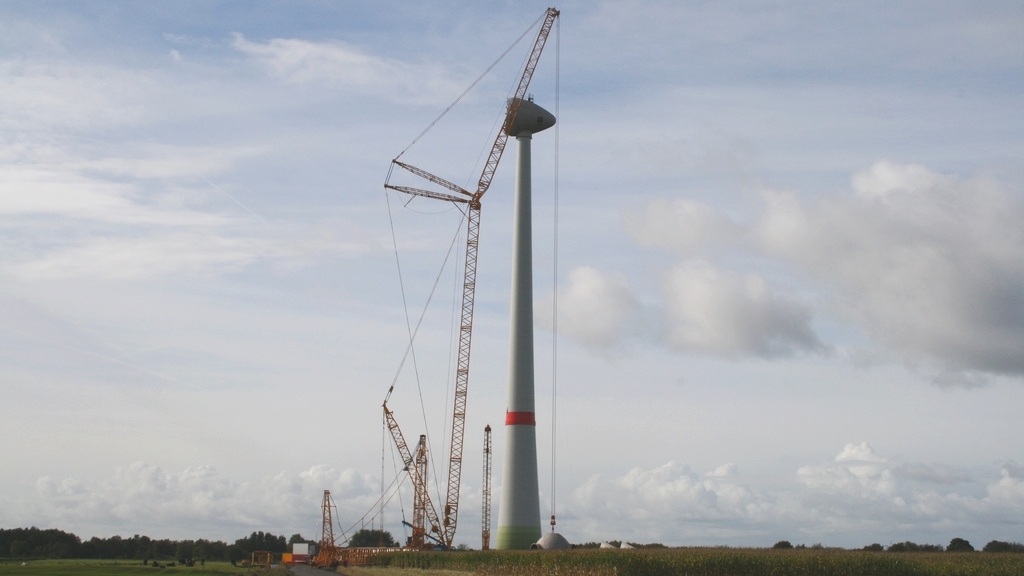 Germany now has around 41.7 gigawatts of wind power installed, equivalent to more than half of peak power demand. (Photo by Jumanji Solar, modified, CC BY 2.0)

At the end of January, the German Wind Energy Association BWE and engineering group VDMA published their overview of new wind installations in 2015. The good news is that just over 3.5 gigawatts was installed, putting 2015 in second position behind the roughly 4.4 gigawatts of 2014 and ahead of the previous record year of 2002 at 3.2 gigawatts. The statistics are, however, still preliminary.

Germany now has around 41.7 gigawatts of wind power installed, equivalent to more than half of peak power demand. Germany is no longer the leader in absolute installed capacity (China has three times more; the US has more than twice as much), and Germany is probably in fifth place (roughly tied with Lithuania and Romania behind Denmark, Portugal, Ireland and Spain) in terms of installed wind power capacity relative to peak power demand.

The BWE estimates that around 55 gigawatts of wind power capacity was installed globally last year, a 10 percent increase from the roughly 50 gigawatts built the year before. The global wind market has grown so strongly that even a near-record year in Germany still only plays a minor role; Germany only made up just over six percent of new additions globally last year.

Because Germany built so many wind turbines so long ago, “repowering” has now become an issue; new turbines are replacing old ones after 20 years of service. Roughly 195 megawatts was taken down and replaced by 484 megawatts of capacity. Another way of looking at it is the number of turbines: 176 modern ones replaced 253 old ones. These numbers are an excellent indication of how wind turbines have progressed over the past two decades. Repowering thus made up around 13 percent of new additions last year in Germany.

Repowering also means that a smaller number of modern turbines replace a larger number of old ones. The chart above gives you an idea of the tremendous advances in wind technology since 1990. Germany now has nearly 26,000 turbines installed. As recently as 2010, the average turbine size was still smaller than two megawatts, but the average turbine used for repowering last year had a rated output of 2.8 megawatts – an increase of 40 percent in only five years. Clearly, innovation is not over.

Even a comparison of 2014 and 2015 is illustrative. The average hub height (the hub is the spinning center that the blades are connected to) grew from 116 meters to 123 meters. Likewise, the rotor diameter grew from 99 meters to 105 meters. Both of those are increases of around six percent – in just one year.

One other trend is worth mentioning: turbines with taller towers, longer blades, but the same old generator size. This combination increases the capacity factor, meaning that the turbines are able to generate electricity more often; the taller tower and longer blades are still able to push the generator at low wind velocities. This trend is global (here is NREL on the same situation in the US). In Germany, one outcome was that turbine manufacturer Nordex, which specializes in such turbines, increased its market share from 8.7 to nearly 12 percent last year (report in German).

Nonetheless, the wind sector is not completely happy. One main driver of last year’s success is concern about the transition from feed-in tariffs to auctions. The government aims to finalize this legislation next year for it to take effect by 2017 at the latest. As we recently explained, the amount of onshore wind power to be auctioned will only cover whatever is left over after the amount of offshore wind and PV built has been subtracted from the annual maximum. The situation is unsatisfactory from two angles: first, it was primarily onshore wind that got the Energiewende moving in the first place; and second, onshore wind continues to be the cheapest source of renewable electricity. “This is particularly a threat to the small players and citizens’ cooperatives that we urgently need for ground level acceptance and embedding of the energy transition,” argues BWE President Hermann Albers. “We appeal to federal government to take advantage of the exceptions permitted by Brussels,” which specified this year that wind farms no bigger than 18 megawatts (around six turbines of the current average size) can be built outside of auctions – an option the German government has yet to allow.