People who want to change the world need to understand why some campaigns are successful while others aren’t. One US commentator has investigated the Keystone campaign’s success in this respect. The overlapping with the German nuclear phase-out is salient. By Craig Morris.

The anti-Keystone movement and the German anti-nuclear movement share a lot of characteristics that allowed both movements to ultimately succeed. (Photos by tarsandaction/Emma Cassidy, CC BY 2.0 & Hans Weingartz, CC BY-SA 3.0 DE, modified)

Why all the attention to the Keystone pipeline given its limited impact on global carbon emissions? Over at Vox.com, David Roberts investigates that question. He compellingly argues that it’s the wrong one: “It would be like criticizing the Montgomery bus boycott because it only affected a relative handful of blacks.” And he says the question “confuses wonk logic and activist logic.” What exactly does that mean? 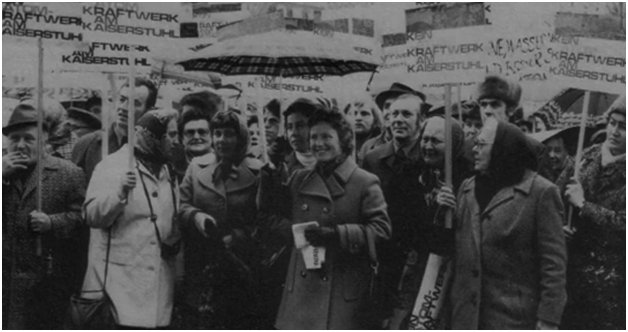 German protesters in 1974 against the nuclear reactor in Kaiserstuhl, the first nuclear plant ever blocked by citizen protests. Note that the signs they are carrying read “no power plant in Kaiserstuhl.” The primary concern was not radioactivity, but plans to industrialize an already prospering farming community. A lead production plant was also planned in the area as a buyer of the nuclear power, with more industry to come. Source: Sasbach archive.

First, climate change is abstract. A pipeline is concrete. It exists in particular areas, where rallies can be held. “If [Keystone campaign critics] think they can get hundreds of thousands of people in the street for a revenue-neutral carbon tax, they are welcome to try.”

Second, Keystone impacts climate change but also brings together people interested in other issues. “Supply-side fossil fuel projects… offer clear villains, unambiguous markers of success, and local impacts that help draw support from other affected communities and demographics.” Successes in blocking specific projects put fossil fuel providers on the defensive, forcing them to overcome opposition with every project – divestment instead of “the default yes,” as Roberts puts it. “Getting there means removing that presumptive social warrant” that oil firms have when they claim they are just providing us with a product we all want. Such campaigns “seek to remove the social license enjoyed by fossil fuel companies.”

Finally, specific projects give politicians something they can act on directly: “the outcome was purely under Obama’s control.” Overall, Roberts argues that the Keystone activists aimed to “change culture,” not just block a particular project. And its success was never a foregone conclusion: “It was a small miracle, a confluence of currents, lightning in a jar.”

How does that relate to the German nuclear phase-out?

To begin with, the German anti-nuclear movement changed political culture in Germany. It worked; today, no major project is built without citizen involvement – no coal plant built without protests. The original protests in 1974 were about authoritarian governmental officials in bed with companies out to make profits, with risks passed on to local communities. Originally, the Energiewende starts as a protest against plans to industrialize a thriving rural area. It is impossible to know for sure, but it is highly likely that plans to build a gigantic (1,375 MW) coal plant in the area to attract industry would have been met with similar opposition.

Like the Kaiserstuhl plans, the Keystone project brought together a lot of communities affected along the planned route. Americans along the route had similar concerns about being forced to accept the risk of local oil spills. In Kaiserstuhl, Roberts’ “confluence of currents” was the police brutality against the first protesters. Once word got out, the protests ballooned to 28,000 people – with energy democracy firmly in the foreground.

The German and American campaigns also both had “clear villains.” In the case of the nuclear phase-out, only four utilities – the biggest ones – are major shareholders in reactors. It is easy to depict such corporations as heartless bad guys only interested in their own profits, and such a small number can be easily corralled. In contrast, scores of German municipal utilities with closer contact to communities own smaller gas and coal facilities. There would be more entities to fight and far more personal contact between these utilities and affected communities.

The German anti-coal movement is now applying these lessons. A recent proposal corralled primarily four big utilities (the same ones that own reactors), who were to be forced to ramp down power production. Unfortunately, it still did not go through because too many coal mining jobs would have been affected, and labor unions came out in force. Keystone would have created only a few dozen permanent jobs, in contrast.

The anti-coal campaign continues in Germany, and it now focuses on direct action – protests at specific locations. The battle is not over yet. And coal is losing its “social license,” with only five percent of the public wishing to have coal power in the future (report in German).

People concerned about carbon emissions also ask “why the nuclear phase-out.” As with Keystone, the question is not quite right. The Energiewende predates popular awareness of global warming, which grew in the mid-80s, more than a decade after the first protests in Kaiserstuhl. There were always other things at stake: concern about radioactivity grew in the late 70s, and the call for energy democracy led to people building renewables themselves. I close with Rob Kunzig’s conclusion in his recent article on German energy policy at National Geographic: “there would have been no energiewende at all without anti-nuclear sentiment.”