Researchers from Fraunhofer ISE have published a new report investigating the net cost of Germany’s energy transition. The good news is that the German government’s current goals are likely to be affordable. The bad news is that 100 percent renewable energy is less so.

In terms of cost, there is a huge difference between an 85% and a 100% renewable energy system.

Germany has a goal of at least 60 percent renewable energy in all sectors (heat, transport, and electricity) by 2050. The goal for power alone is at least 80 percent. In formulating that target, policymakers may have had the Pareto principle in mind. It states that 80 percent of effects come from 20 percent of causes. For the goal of 100 percent renewable electricity, which most German renewable energy campaigners have, closing that last fifth means costs will skyrocket.

Now, Fraunhofer ISE has put a finer point on the matter. The study, which has not yet been released in English (PDF in German), first investigates the official German target of an 80-95 percent carbon emission reduction in the energy sector, which makes up around 85 percent of German greenhouse gas emissions.

Below, you see our translation of the main chart. Two scenarios were investigated for cost. The first one has no carbon price and assumes that fossil fuel prices will remain stable. The second assumes a carbon price of 100 euros per ton of CO2 by 2030, with fossil fuel prices rising by two percent per annum. (After 2030, no further price increases for carbon or fossil fuels is assumed). In the first (and unlikely) case, the transition remains more expensive, but in the latter the transition is eight percent less expensive than the reference case. 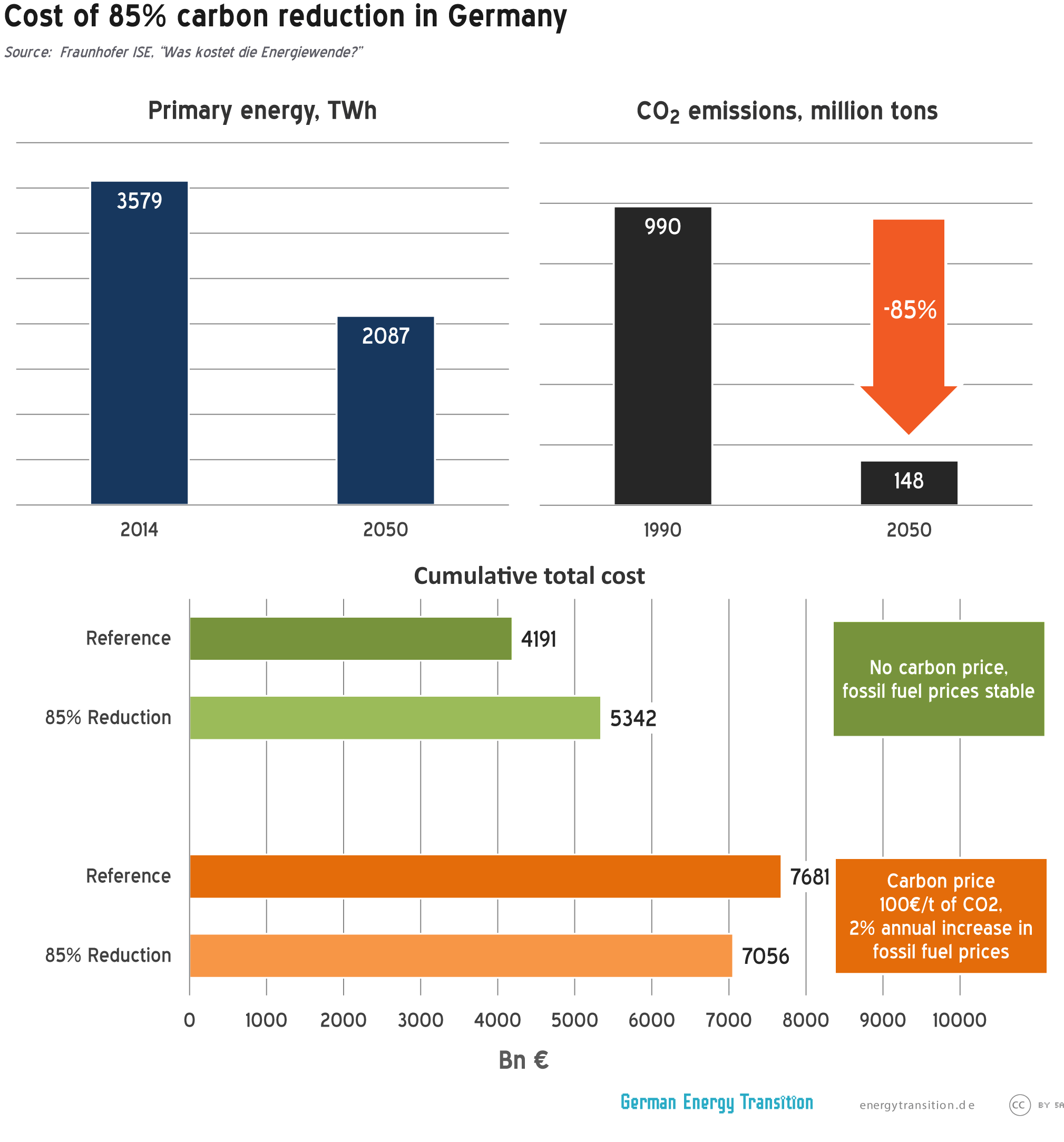 The 85 percent target is the middle range in the spectrum from 80 to 90 percent investigated. In other words, reaching only an 80 percent carbon reduction would be even less expensive. Below, I simplify one of the charts showing how much wind (offshore and on) and PV would be needed:

The seven scenarios for the 80 percent reduction investigate things like synthetic fuels from renewable electricity, such as green hydrogen and methane. The installed capacity of such facilities rises from 80 GW to 180 GW, more than doubling for the 10 percentage point increase.

Otherwise, the scenario for 85 percent lower carbon emissions assumes that 157 GW of solar thermal will be used for low-temperature heat in buildings and industry. The efficiency for the production of green hydrogen is assumed to be 50 percent, meaning that half of the energy is lost in the process. Surprisingly, very little electricity would be curtailed at only two percent. Interestingly, biomass is not emphasized much in the text (a sign of how bioenergy growth is being deemphasized in the German debate), though it would still make up around 14 percent of total energy supply in this scenario. Finally, roughly two times more natural gas and oil would be used than raw biomass, but no coal at all would be consumed. Without a coal phase-out, “a more than 80 percent reduction will be very hard to reach,” the study finds.

There are far more assumptions and findings here than I can do justice to in this small space. Let’s hope that Fraunhofer publishes the full study in English.

My main takeaway is that a focus on 80 percent renewables rather than 100 percent changes the debate considerably. At a recent conference in Morocco, researchers focused on the weak points in the 100 percent target, such as: is green hydrogen really feasible when half of the energy is lost? I recommended that they focus on what needs to be done now and address those issues when they actually arise. If we double the share of renewables by 2030, for instance, we deal mainly with political and finance issues, not technical ones. For instance, we concentrate on the early retirement of existing conventional facilities. If we want zero coal consumption by 2050, we cannot build any further plants, and we have to close the ones recently built early. These issues need addressing now.