Some foreign onlookers predict that Volkswagen’s emissions fraud will discredit German climate efforts. German climate campaigners see the event as an opportunity to bring the energy transition to the transport sector, as Craig Morris writes.

How big of a problem is the Volkswagen scandal really? Could it be an opportunity for the Energiewende? (Photo by Christopher Dombres, modified, CC BY 2.0)

“A car scandal shoves Berlin off high ground” writes the New York Times. The paper says Merkel will have a hard time presenting her government as a climate leader at the Paris climate summit. The good news is that the scandal will also put pressure on the German government to abandon its lax approach towards the country’s automotive sector and finally get serious about an energy transition for the transport sector. 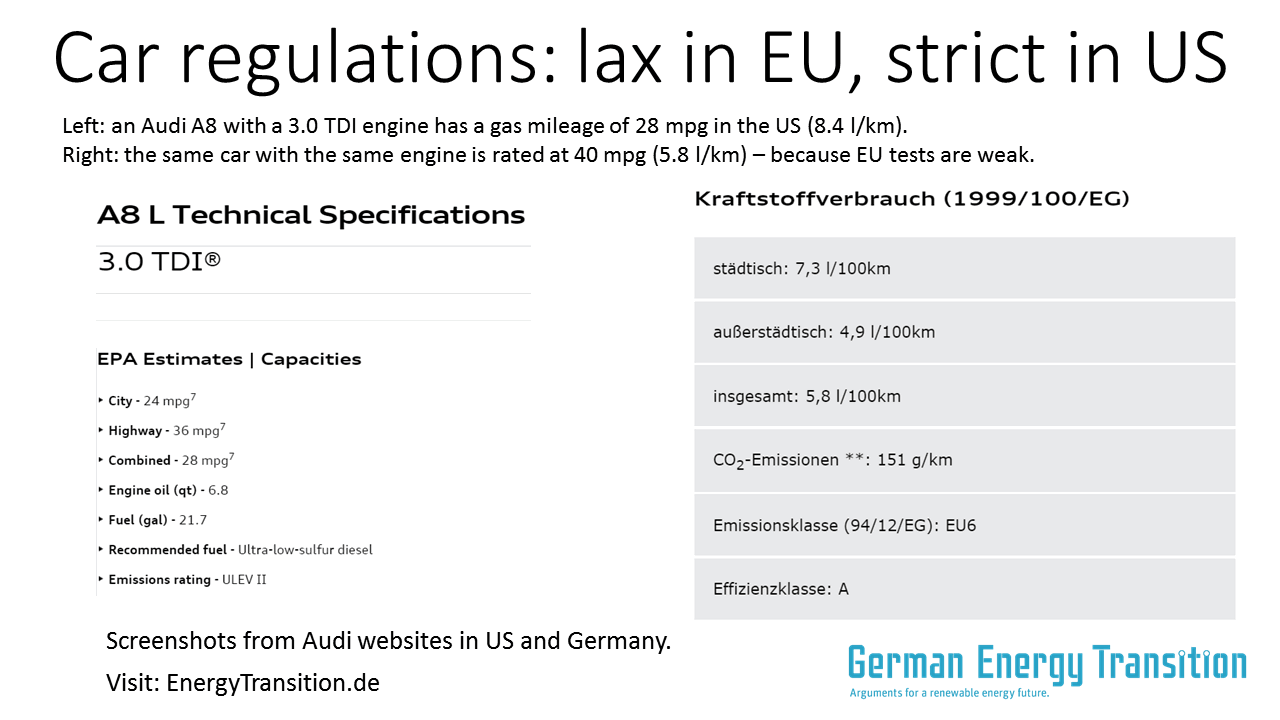 Germans often complain that their actual gas mileage is significantly higher than what care makers claim. The reason is that the rating system is rigged. In contrast, when you buy a car in the US, you get the gas mileage indicated on the sticker – because US regulations are strict.

The German government has a goal of one million electric vehicles on the road by 2020. At the end of 2014, there were 8,522. Berlin could incentivize the building of charging stations, for instance, but it has taken no action at all. Nor are German car makers leaders in hybrid vehicles. Overall, Germany lacks a comprehensive climate strategy for transportation. In fact, Germany subsidizes gas guzzlers. Some two thirds of all new cars sold with more than 200 horsepower are partly covered by taxpayers because businesses and freelancers can write them off. The figure increases to 80 percent for luxury models (report in German). Why are German regulations for greener cars so bad?

Back in January 2007, Merkel commented on Brussels’ call for lower car emissions (in German):

“That cannot possibly mean that we now need a general obligation for all cars – regardless of the segment in which they are produced – with the same standards… We will prevent a general reduction. I for one will fight against it with all of my might.”

And she did. She opposed uniform emission standards for big German luxury cars along with tiny Fiats and Peugeots, calling instead for standards by vehicle size – with lobbying support from German car makers. In 2008 (report in German), then-Environmental Minister Sigmar Gabriel opposed uniform standards, explaining that the call for a standard emissions level would hit German car makers more than French and Italian ones. And again in 2011 and 2013 (report in German), the justification was always the need of protecting the German automotive industry.

Even more damning, the German government closed its eyes to malpractice while VW grew to become the world’s largest carmaker. In 2011, German environmental organization DUH told the German Transport Ministry about excessively high levels of nitrous oxides from a Volkswagen diesel – exactly what has now been discovered in the US (report in German). In July, the Green Party specifically asked the government in a parliamentary query whether German law takes account of “cycle recognition by motor control systems.” Government officials answered that they did not believe “that such technologies generally work” (PDF in German). So they conveniently didn’t look.

Volkswagen could have sold cleaner cars; they chose not to. Back in 2002, VW produced a two-seater concept car that got 235 miles to the gallon (1 liter per 100 km). This car has yet to go on sale. Over the past 20 years, Germany’s population of cars has held steady at just over 40 million cars – the market is saturated. If you are only going to buy one car, German car makers – Porsche, BMW, Mercedes, Audi, and VW – want it to cost EUR 50,000, not 20,000. Profit margins are slim on cheap cars, where consumers are cost-conscious. In contrast, buyers of sports cars and luxury sedans tend to say, “shut up and take my money,” so margins are bigger.

Note, however, that Volkswagen’s car with 235 mpg also ran on diesel. German car makers know diesel. They don’t know electric vehicles or driverless cars any more than US car makers do. Remember, those advances have largely come out of Silicon Valley, not Detroit – which is where this story becomes interesting. There has been a lot of talk about the utility death spiral from disruptive renewables. There has been less talk about the car maker death spiral from Internet geeks, but it’s coming. German car makers are not prepared, so the VW scandal may be the first and only wake-up call they get: retool now.

In the end, Berlin may have lost face, but we should not, as the New York Times does, conflate the Energiewende with the German government or Volkswagen. The latter have not always been helpful, to put it mildly. The VW scandal is a window of opportunity to embarrass the German government into real support for progress in the transport sector – and German car makers into true cleantech innovation. Until recently, Merkel took strict EU car regulations to be a threat. The lesson now is clear: save German car makers by making them leaders in clean technology!

Germany had the technical expertise, a big domestic market, and environmentally conscious public for a transition in the power sector. The same can happen with transportation. The transition in the power sector came about because citizens wanted renewable electricity. If the public wants cleaner cars, the time to call for them is now. Don’t let German car makers off the hook – it’s for their own good!

Craig Morris (@PPchef) is the lead author of German Energy Transition. He directs Petite Planète and writes every workday for Renewables International. He drives a 2008 Skoda diesel, which uses VW technology. At present, the car is not listed among those rigged.