While the world celebrates unprecedented renewable capacity additions, there are clear signs that this growth stops for wind and solar at a small share of the market. Italy and Spain are perfect examples for this, explains Craig Morris.

At the beginning of August, the International Energy Agency made a major announcement: renewable power production was second in the 34 OECD countries behind only coal power. The share of coal power actually fell, so readers could easily assume from the chart below that renewables are going to take the lead at some point. 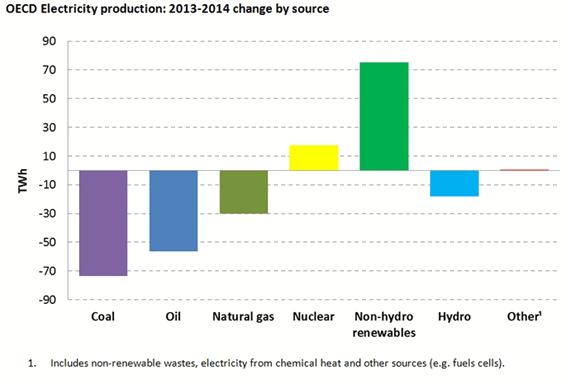 And that is just the power generated, including from old conventional power plants. In terms of new projects, renewables clearly dominate. For instance, PV and wind alone made up nearly three quarters of new power capacity installations in the EU last year, and more coal, oil and gas capacity was closed than added (PDF). So the future looks bright, right?

Not so fast. According to REN21, Italy had the second most PV capacity per capita in the world in 2014 after only Germany. In terms of total megawatts installed, the Italians came in fourth behind three much bigger countries: Germany, China, and Japan (but ahead of the United States). Spain ranked fourth for wind power both in terms of total capacity installed and per capita capacity. And renewable development in both of these countries has come screeching to a halt.

They did so at relatively high levels of solar and wind. In 2013, Spain drew international attention when wind power was the largest source of electricity in the country, just ahead of nuclear by 0.1 percent. Nuclear took the lead again in 2014, but solar (CSP and PV) and wind still make up roughly a quarter of Spanish power supply (PDF). The Italians do not seem to have provided any data for 2014 yet, but the combined share of PV and wind in 2013 was also 25 percent (PDF).

I’m not suggesting that 25 percent wind + solar represents a natural barrier, but it will do as a rough estimate. The specific reasons for the slowdown in these two countries differ in the details, and both have the economic downturn since the financial crisis in common. Up to 2008, Spanish utilities welcomed all comers because power generation was expected to increase, so PV and wind could grow without hurting other power plants. In addition, Italy is a major power importer, so PV and wind lessen that dependency – but they eventually also start offsetting domestic conventional generation. 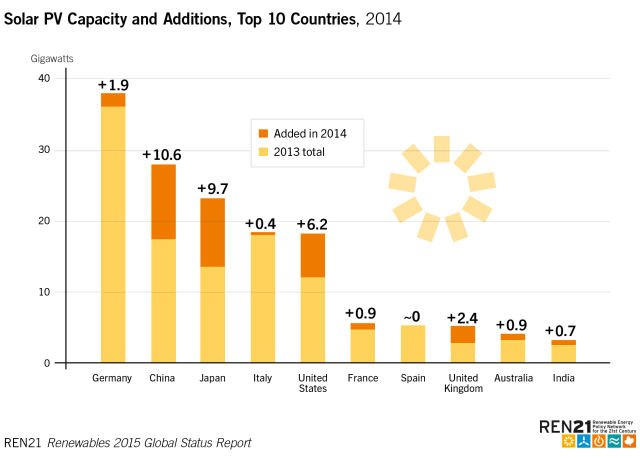 The chart above shows that the solar boom in Italy is over. The country has around 18 GW installed but only added 0.4 GW last year. Assuming a 25-year service life for solar arrays, the country would only have 10 GW (0.4 x 25) of PV over the long run at last year’s installation rate. Spain still managed to come in seventh globally thanks to its boom that ended in 2008, but “~0” speaks for itself – that market has come to a complete standstill (only 0.007 GW of PV was newly installed last year). The situation has not improved in 2015 either; in the first seven months of 2015, the Spanish installed nothing at all according to the official figures (spreadsheet in Spanish).

For wind power, the situation is similar. Spain had nearly 23 GW of wind turbines installed in 2012; Italy 8.1 GW in 2012. Since then, the two countries have added less than 0.6 GW each – not annually, but in total (source). 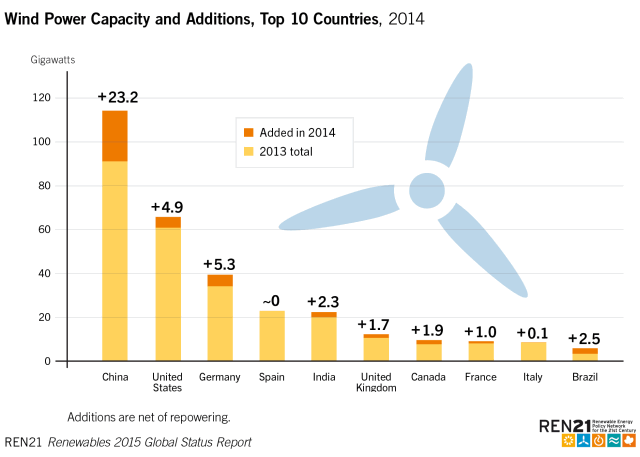 Italy simply let its solar budget expire without renewal, whereas Spain has implemented draconian policies to stop solar completely. Utilities were mainly behind wind farms in the two countries, and they have simply lost interest.

Growth will continue worldwide in countries that have not reached that level, and manufacturers will not complain as long as the global market grows – so you may not hear much about this glass ceiling. For instance, the US only got around five percent of its electricity from wind and solar in 2014. There is a lot of space to grow there still.

Denmark (40 percent wind power and counting) and Germany (20 percent wind + PV and counting) are the exceptions. They share a grassroots movement of community renewable energy projects. Without that democratic participation, utilities see no business case for high shares of renewables. They will invest in wind and solar initially based on incentives, but also because these two sources initially offset more expensive peak power plants. At higher levels, they simply cut into utility bottom lines too much. A greater level of renewable energy will not seem like a good idea based on such microeconomic calculations. Macroeconomic views will be needed, as will public insistence.