A recent survey conducted among the German public finds continuing support for the Energiewende. Furthermore, only a third said the cost was too high. Craig Morris says a closer look also reveals that people who already have systems close by are less likely to oppose them.

The average German household currently pays 18 euros per month for the renewable energy surcharge. A survey conducted in August by TNS Emnid for renewable energy organization AEE finds that only 31 percent of the participants believe that is too much, compared to 57 percent who believe that amount is acceptable and six percent who think more needs to be paid. Overall, a whopping 93 percent of those surveyed said that further growth of renewables was “important” or “very important.”

The survey also included a question about the acceptability of specific electricity generation systems. While 68 percent support renewable energy systems in general, only seven percent like coal plants – and only four percent nuclear. Note that in all cases, acceptance increased when people already had experience living close to such plants. 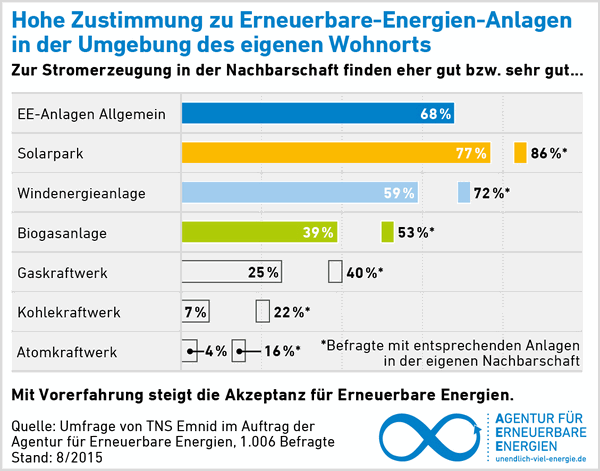 Support for renewable energy remains high in Germany. From top to bottom, renewables in general, solar arrays, wind farms, biogas units, natural gas turbines, coal plants, and nuclear plants. The boxes to the right of each bar represent the level of support by people who already have such systems nearby. Source: AEE

Acceptance of solar power plants was the greatest at 77 percent, compared to only 59 percent for wind turbines. But notice the huge discrepancy: a far higher number (72 percent) of people who have experienced wind farms nearby support the technology.

In contrast, support for biogas units was the lowest at a mere 39 percent, rising only to 53 percent among those who already have experience or live close by to those units. This low level of support is one reason for why the government has clamped down on bioenergy in general; the other reason is cost.

Finally, the survey asked what people expect of the Energiewende. The top answer was “making the future safer for our children and grandchildren” at 77 percent, followed by “”protecting the climate” at 73 percent. In contrast, only 33 percent believe the energy transition will “lower costs for consumers in the long term.” Questions about energy democracy – “citizens can take part in energy supply” and “more competition with power corporations” – revealed middling expectations at 57 and 50 percent, respectively. Note, however, that the question was not why people supported the Energiewende, but what outcome they expected it to produce.

Similar questions were asked in a survey from September 2013, which also found exactly 93 percent in support for the growth of renewables. Likewise, support for the various technologies has only shifted slightly, as have the expectations, which had the exact same order (with slightly different numbers) two years ago. In other words, over the past two years, support for the Energiewende has hardly changed.