Most of the talk about high energy prices in Germany focuses only on retail electricity rates. But firms pay different power prices, and their expenses on energy may focus more on fossil fuels for heat than electricity. Furthermore, German labor is expensive and may often be a bigger budget item than energy. Craig Morris summarizes the findings of two recent studies.

Germany exported as many goods in 2014 as never before. (Copyright: AUDI AG )

In a study published (PDF in German) at the beginning of this year, German economists Robert Germeshausen and Andreas Löschel investigated the “average energy unit cost” for German industry. Their findings were largely in line with a paper published a few months later by Claudia Kemfert and Johannes Trunzer (PDF in German).

First, we need to define “average energy unit cost.” Essentially, it is the energy price multiplied by energy intensity. If you want the more technical formula, here it is:

As I recently explained in terms of US and German monthly household power bills, prices alone do not tell us much; we need to take consideration of the amount of energy consumed as well. High prices incentivize efficiency. The question is therefore how much value is created from the energy input. The chart below shows that German industry performs quite well in this respect. 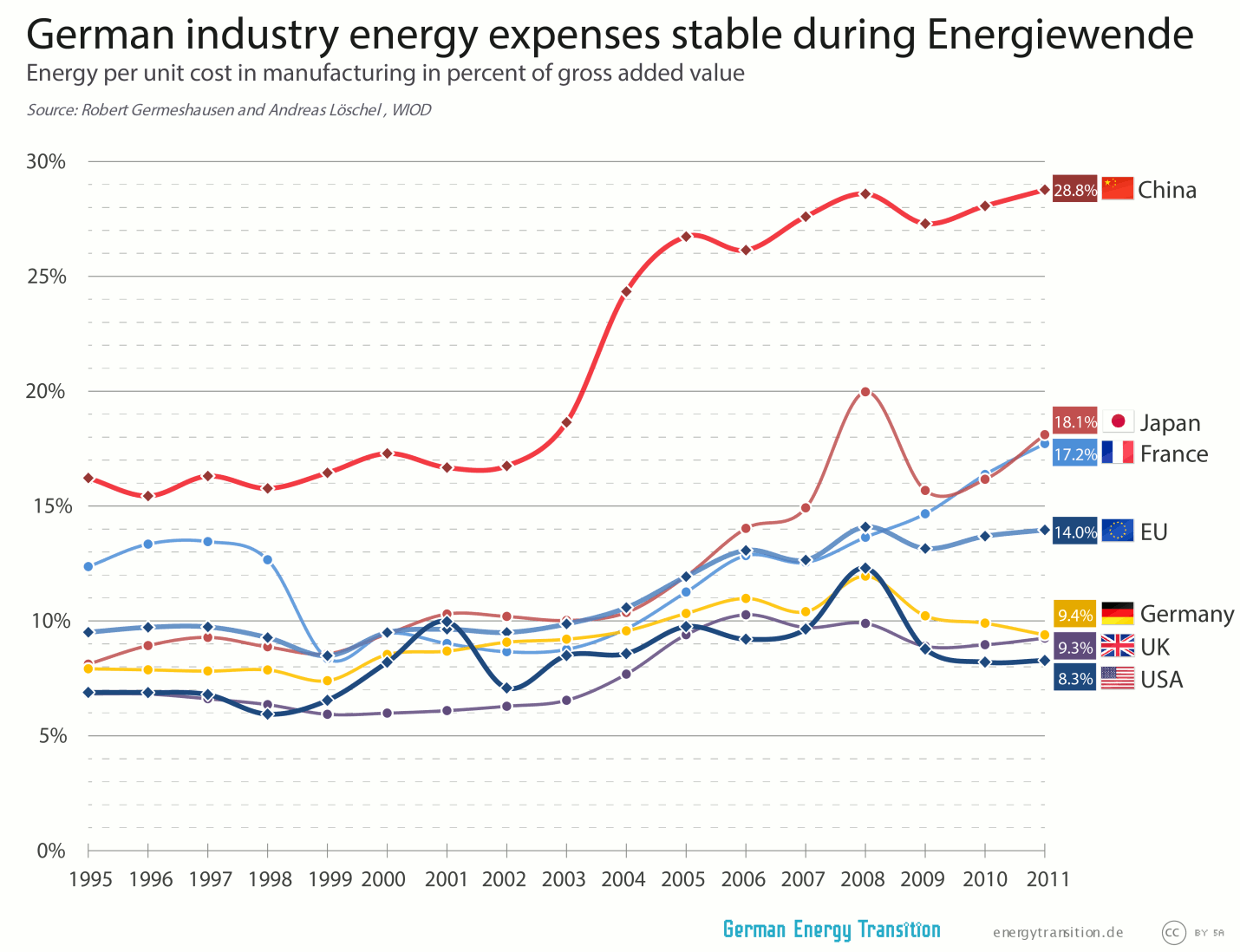 Here, we see that energy makes up far more of the added value in China than in the EU. More than a quarter (29 percent) of the cost of products in China is related to energy, and that share skyrocketed about a decade ago. You might say that, more than any other country, China is turning energy into products and services.

In comparison, Germany, the UK, and the US have been among the countries with the lowest share of energy costs per gross added value historically. What’s more, this ranking did not change much from 1995-2011. At the beginning, Germany was third, and in the end it was still third. The percentage of energy in added value rose in Germany from around eight percent to around nine percent during that timeframe, but it rose even more everywhere else. Like China, Japan and France have roughly seen the percentage of energy double in added value.

Of course, these numbers are aggregated across all manufacturing sectors. Germeshausen and Löschel also investigate Germany by sector (without a country by country comparison). They found a general trend upwards, but mostly a wide range – from 21 percent in the automotive sector to five percent in chemicals and less than three percent in mechanical engineering. Keep in mind that the chemicals sector largely depends upon natural gas, and we see that role that the cost of electricity plays is indeed relative.

Overall, it is hard to see any impact from the Energiewende in this data at all. Because complete numbers were not available after 2011 for an international comparison, we don’t know exactly what the comparison looks like for 2012-2014, but we do know that German exports are higher than expected in 2015.