Curbing climate change could be the biggest global health opportunity of the 21st century. But if we choose not to act, we could reverse all the progress made by economic development in the last 50 years towards improving global public health. Roz Pidcock summarizes the findings of a new Lancet report.

These are the conclusions of a new report by the Lancet Commission out in June.

Curbing air pollution, phasing out coal, access to clean energy worldwide and promoting healthier lifestyles would have “immediate gains” for human health, says the report. The authors also call for a global price on carbon and a scaling-up of adaptation financing.

The Lancet Commission is a body set up to map out the impacts of climate change on health, and make recommendations to improve health standards worldwide. Today’s report is a collaboration between European and Chinese academics across the physical, health, political and social sciences, economics, energy policy and engineering.

Impacts are here and now

“After only 0.85C warming, many anticipated threats have already become real-world impacts.”

And if we continue to track the highest emissions scenarios – taking us to 4C or 5C by the end of the century – the risk of potentially catastrophic impacts rises even higher, the report adds.

Changing exposure in over 65s to heatwaves by 2090 for RCP8.5 (left). Growth in annual heatwave exposure for over 65s with and without accounting for a growing and ageing population (right). Source: Lancet Commission report on health and climate change (2015)

The impacts of climate change on human health are all-pervading. Small risks can interact to produce larger-than-expected chances of catastrophic outcomes, the report notes. As well as the direct effects of rising temperatures on heat stress, floods, drought and other extreme weather, climate change increases air pollution, alters the spread of disease and raises the risk of food insecurity, malnutrition, migration and conflict.

The Lancet commissioned an earlier report on climate change six years ago, which came to many of these same conclusions. But that warning “was not heeded”, says Margaret Chan from the World Health Organisation (WHO) in a preface to today’s report. So, the new report changes tack. Instead of talking about climate change as a major global health risk, it focuses on the many health benefits that would come from curbing emissions. 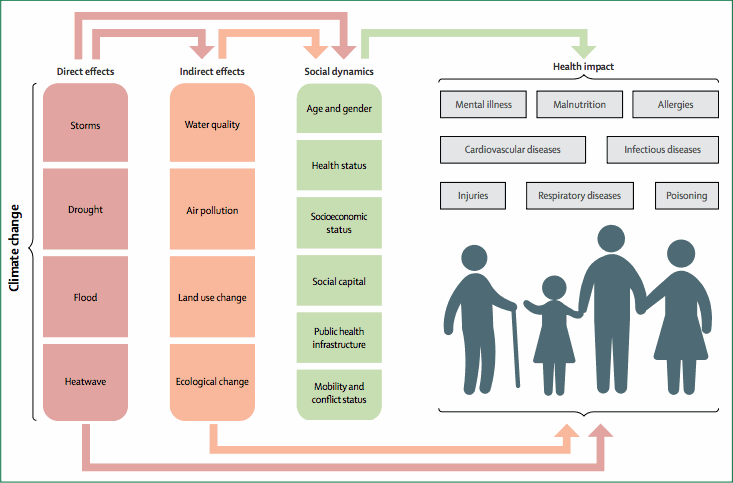 The biggest health benefits worldwide come from reducing exposure to air pollution from fossil fuel burning, says the report. In 2014, the World Health Organisation (WHO) estimated that seven million extra people die each year from household and outdoor air pollution. Globally, 88% of the world’s population breathes air that is below the WHO’s guidelines for safe levels.

In the EU, reduced air pollution could deliver benefits to the tune of €38bn a year by 2050. In China, scientists estimate air pollution reduces average life expectancy by more than three years, but that this could be halved with stringent climate mitigation. But calculations of the cost of fossil fuels routinely don’t account for their global impacts on climate, human health or ecosystems, says today’s report. Neither do economic assessments of the costs of mitigation capture the many and varied health benefits from cutting emissions.

Global energy demand grew by 27% from 2001-2010, largely concentrated in Asia (79%), today’s report notes. Most of the global growth in energy use was in coal for generating electricity (44%), a statistic which the report calls a “dangerous reality for human health”.

The authors call for a rapid phase-out of coal as part of an “early and decisive” policy package. Many of the 1,200 coal-fired power plants proposed for construction, they say, will need replacing with cleaner energy alternatives. 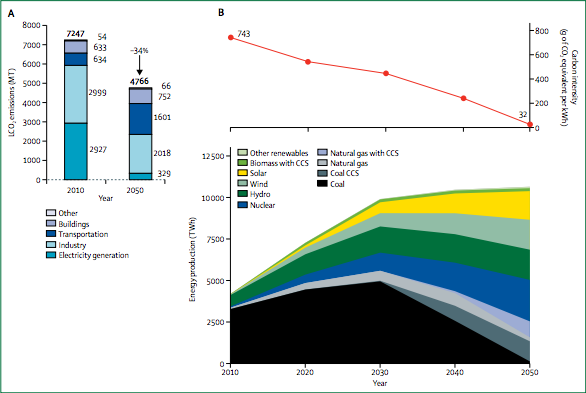 Energy-related CO2 emissions for China in 2010 and 2050 (A). Energy supply pathway for electricity generation (B). Lancet Commission report on health and climate change (2015)

Public health has a lot to gain from reductions in short-lived pollutants, such as methane and black carbon. These don’t hang around in the atmosphere long, but have a much stronger warming effect than carbon dioxide, the report notes. The WMO and the UN Environment Programme estimate that air quality improvements from tackling black carbon alone could prevent 2.4m deaths annually worldwide.

Clean energy for all

Access to energy is a key enabler of economic development and social well being, the report says. But the world’s population must be able to access clean forms of energy that allow this basic need, but which do not come with huge health consequences. Many choices for mitigation or adaptation are “no regret” options, the authors note. As well as reducing the burden of ill-health, they make for more resilient communities, help alleviate poverty and address global inequality.

But without action on climate change, the world will fall far short of poverty and sustainable development goals. The report says:

“The poorest people are also most vulnerable to climate change, meaning that the costs of global development will rise if we do nothing.”

The report also highlights how industrialised countries can do more to promote low-carbon lifestyles in their cities. But just telling people about the health co-benefits of physical exercise and eating less red meat isn’t enough to garner change on its own. The authors say:

“The overarching lesson is that even when behaviour change yields direct personal benefits, amounting in some cases to a decade or more of life expectancy, it is extraordinarily difficult to achieve through persuasion.”

What’s needed is strong political and local support for low-carbon lifestyles by providing safe walking and cycling networks and access to green spaces, for example. This won’t be simple and requires coordination across more than one government department, including transport, health and the environment, the report notes. Retrofitting buildings to be more energy efficient could save the National Health Service (NHS) more than €700m per year in England alone, the report adds. 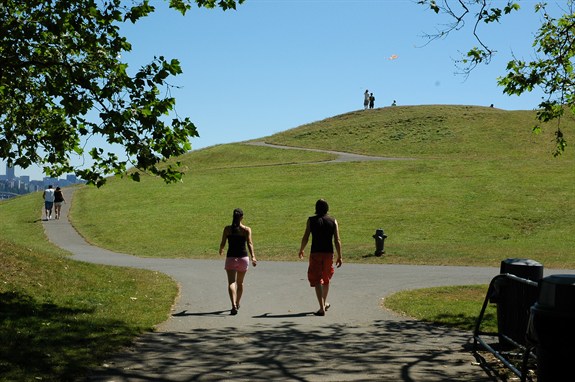 Low-carbon living means tackling the “deeply entrenched” use of fossil fuels, says the report. But the technologies to allow the transition have been in existence for at least 40 years, making climate change action a political challenge rather than an economic or technical one.

The International Energy Agency estimates that an 80% chance of keeping global warming to within 2C of pre-industrial temperatures would require investment of roughly $1 trillion per year up to 2050, about 10% of existing expenditure on health care. This “insurance premium” is very modest compared to the costs of avoided impacts, today’s report says, and that’s even without factoring in the co-benefits.

Viewing climate change through the lens of public health puts a human face on it, say the authors. Too often climate change is viewed as a distant problem, with abstract consequences affecting some future generation. Concern over human health has the power to accelerate political action in a way that talking about greenhouse gases alone can’t, the report says:

“These concepts are far more tangible and visceral than tonnes of atmospheric carbon dioxide, and are understood and prioritised across all populations irrespective of culture or development status.”

And health professionals are no strangers to “powerful entrenched interests” in working to protect against other global health threats, such as tobacco, HIV/AIDS and polio, it adds.

The Lancet commission suggests launching an international coalition to report on progress on climate change and health every two years, called A Countdown to 2030. As Chan puts it:

“What gets measured, gets done”.

Dr Roz Pidcock (@RozPidcock) is The Carbon Brief’s Deputy Editor and Science Editor, covering new research in the climate sciences and media coverage of climate change. She has a PhD in physical oceanography from the University of Southampton and previously worked in the Science Communication Unit at the University of the West of England, Bristol.