On March 26 and 27, the German Foreign Office held a high-level conference on the Energiewende in Berlin, subtitled “towards a global Energiewende.” Energy Ministers and Foreign Ministers from a number of countries attended. Craig Morris reports.

The conference attracted participants from more than 50 countries. (Source: www.energiewende2015.com)

The event showed a number of things. First, international interest in the Energiewende is apparently greater than the German government itself realizes. The conference was actually the brainchild of renewable energy organizations in Germany, in particular German solar lobby group BSW. Rumor has it that these groups first approached the German Economics Ministry, which was not interested, so the idea was passed on to the Foreign Office, which was. Originally, 400 participants were expected, but 900 showed up – and many more were turned away. And because of the Foreign Office’s international outreach, the conference attracted attendance from more than 50 countries. 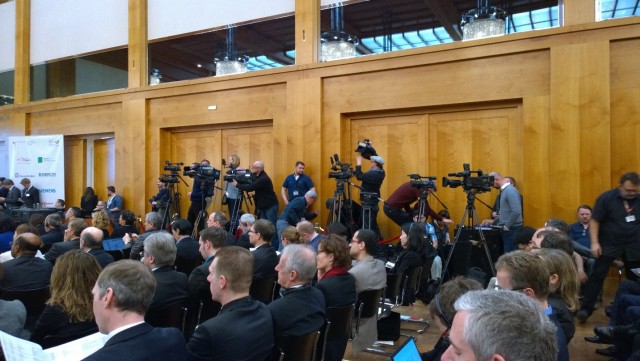 Third, the world is not convinced that the German Energiewende path is the best one. Words of praise were certainly not rare and came from various quarters during the conference. A Swedish researcher called German feed-in tariffs for solar “Germany’s best foreign aid project yet.” The Czech Industry Minister said his country had begun importing its oil via Germany to reduce reliance on supplies from the east. But the Energy Minister of the United Arab Emirates stated his country’s continuing support for nuclear power even as it ramps up renewables (and hosts the headquarters of the International Renewable Energy Agency, IRENA). Furthermore, the room was filled with industry experts who obviously still believe in big investor-owned projects. So when the Energy Minister of Algeria said his country is still open to exporting renewable power to Europe despite the demise of Desertec, the comment drew the most applause of the entire conference (even though the Energiewende’s success has come about with distributed renewable energy, which is the opposite of Desertec).

Fourth and finally, the conference should become a regular event. Numerous panel members expressed their hope that the event would be repeated. There is obviously a need for Germany both to present its plans more clearly and make its case that these plans are a good idea.