Last month, BP – the oil company – conducted a survey in five countries bordering Germany to see what they thought about the Energiewende. Craig Morris investigates.

The Energiewende has put Germany’s energy politics on the map – even among average citizens of neighboring countries. (Photo by Alexrk2, CC BY-SA 3.0)

The results have apparently only been published in German (press release). The main finding is that those who know what Germany is doing generally support the country’s main goals. Here is our rendition of their findings: 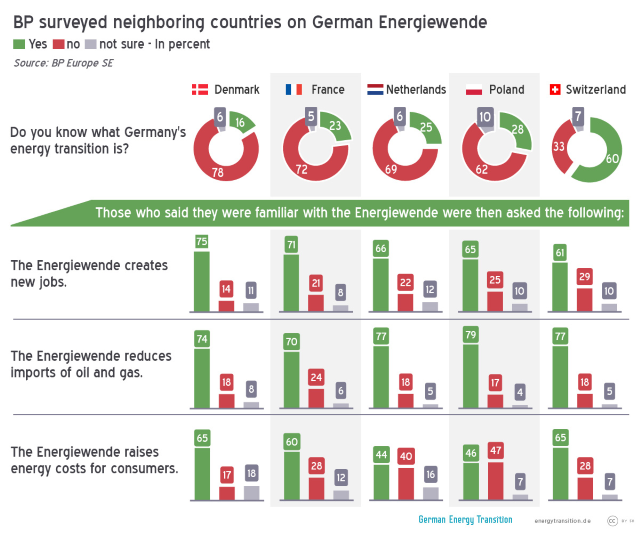 The first question is tricky. Most people in the countries aside from Switzerland apparently do not know what Germany is doing. To make sure what was asked, I contacted BP, and the press spokesperson confirmed that the survey did not ask whether people had heard the word “Energiewende,” but rather whether people knew what the German energy transition was. Unfortunately, the question nonetheless conflates the Energiewende with the year 2011, when little changed for the country’s energy transition – basically nothing for biomass, solar, and wind power, and the nuclear phaseout of that year very much resembles the one from 2002. Still, the common language between Germany and Switzerland, where German is the native language for 70 percent of the population, may help explain why so many Swiss say they know what Germany is doing with renewables.

Likewise, the Netherlands also has a target of “100 percent sustainable energy” by 2050, but they have yet to tell us how they want to get there. And while the Swiss adopted a nuclear phaseout after Fukushima, they have backed away from their already unambitious target year by extending the service life of a nuclear power plant by a decade. For its part, France officially aims to reduce the share of nuclear energy in its power sector from around 75 percent to 50 percent, but they will have to shut down a nuclear plant first to get there, and they are having trouble closing the oldest one now. In contrast, the Polish government remains committed to coal. In other words, these five countries run the gamut in terms of energy policy.

Just over 1,000 people took part in the survey in each country, producing a total sample population of 5,138. BP then asked another three questions to the 1,570 people who said they had heard of Germany’s energy transition. The first two of those questions revealed overwhelming support for what Germany is doing, while the third question could be seen as a sign of willingness to pay the price.

On the third question about whether the Energiewende will cost more, it is worth keeping in mind that Germany built a lot of photovoltaics (around 25 gigawatts, roughly a third of the global market at the time) back when PV was very expensive. It now cost only a fraction of the prices from a few years ago, so other countries that build solar do not face these high costs. 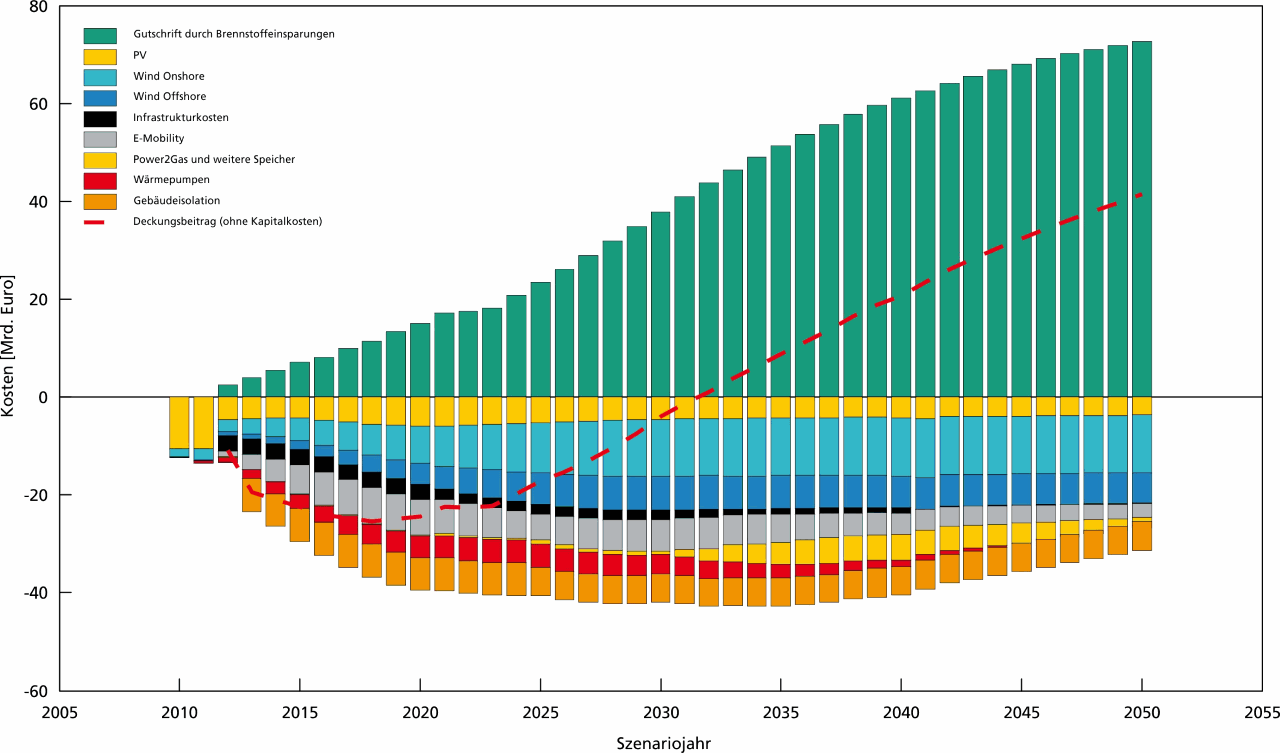 This chart from German research institute Fraunhofer IWES shows expenses on renewables and efficiency below the baseline relative to offset expenditures on conventional energy above the baseline. As the dotted line reveals, Germany currently runs a deficit in its Energiewende, but these investments are expected to begin paying off by the beginning of the 2030s. For more details, see my review of the study.

Nonetheless, the energy transition does require upfront expenses that will only pay off over the long term. In the energy sector, the planning timeframe stretches across decades. In Germany, investments in renewables and efficiency are expected to begin paying off within the next two decades. By 2050, the payback should be considerable.