Germany has rapidly increased the share of renewables in its power mix. Critics claim that this has lead to grid instability. Peter Sopher looks at the numbers and shows that German grid stability has actually increased and is much higher than in most other countries.

Germany’s grid continues to be one of the most stable worldwide, thanks, in part, to underground cables. (Photo by Nico Pudimat)

Since 2004, the year of the first major revision of Germany’s Renewable Energy Act (EEG), the country has added at least 35 gigawatts (GW) of solar and 35 GW of wind to its electric grid – enough to offset upwards of 35 coal plants. What’s more impressive is during the first half of 2014, close to 29 percent of Germany’s electricity came from renewable sources. For perspective, America’s renewables percentage, at about 14 percent, was half of Germany’s during this timeframe.

Meanwhile, the country has improved its status as a grid reliability leader, causing Craig Morris to conclude, “Clearly, installing the equivalent of 100 percent of peak demand as wind and solar capacity does not bring down the grid.” At Renewables International, he further asserts, “Renewables have not yet reached a penetration level that has detrimentally impacted grid reliability.”

This success runs contrary to the predictions of Energiewende’s critics, who have sounded the alarms about investing in “too much” renewable energy. Some of these concerns are more valid than others, but the truth is, most of these claims are blown out of proportion, fixable with solutions that are not overly complex, and/or based on no empirical data.

How did Germany do it? 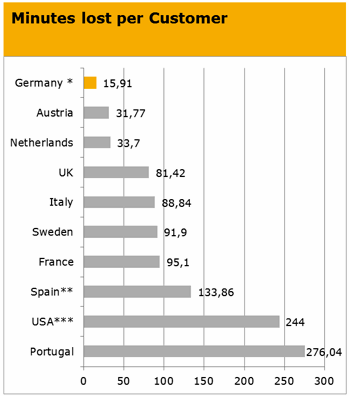 The System Average Interruption Duration Index (SAIDI) measures the average interruption time per electricity customer, and it is the foremost metric used internationally for assessing electric grid reliability.  This past August, Germany’s Network Agency announced that the country’s SAIDI value dropped from 15.91 minutes in 2012 to 15.32 minutes in 2013.

This improvement is especially impressive considering Germany’s 2012 SAIDI score was the third best in Europe and less than a tenth of the value of 244, the most recent statistic from the United States (see graphics).

The indicator that most strongly correlates with grid reliability, and could explain why Germany outperforms the United States, is the level of undergrounding of low-voltage (LV) and medium-voltage (MV) cables. As the name suggests, underground electricity wires are buried and sheltered from inclement weather and thus more reliable than aboveground electricity transmission. Over 70 percent of both LV and MV cables are underground in Germany (see figure below). 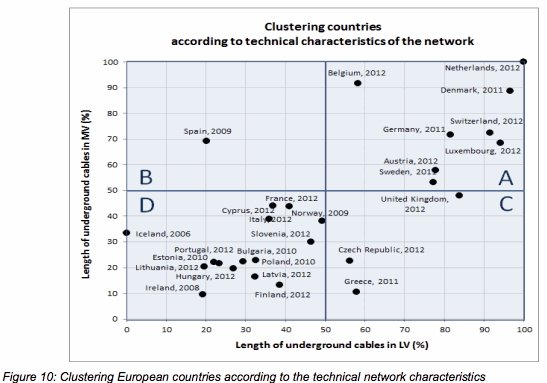 By contrast, 2012 survey results from the Edison Electric Institute indicate that underground cables only serve about 39 percent of homes in the United States (see below). 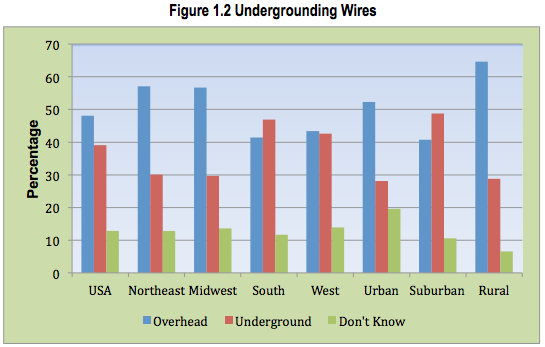 Critics are not always right

“The rapid rise in wind and solar power has created a nightmare scenario for grid operators, who face surges when the wind blows and the sun shines, and shortages when they don’t.  In 2011, more than 200,000 blackouts exceeding three minutes were reported – and experts warn of a growing risk of major power failures.”

But this criticism is shortsighted. SAIDI specifically measures blackouts exceeding three minutes, and since 2006 Germany’s solar and wind capacity have increased by 70 GW while its SAIDI has improved from 21.53 to 15.32.  Furthermore, as argued on this blog before, all ‘grid intervention’ events mean is that “instead of merely sitting there looking at screens, the engineers now have to press buttons”; as a result, there is a “slightly” higher likelihood of human error.

The most valid concern

Of all the criticisms against Energiewende’s reliability success, the issue of cost is the most valid. As it turns out, upgrading the electric grid to a state-of-the-art, 21st century machine is pretty expensive, and that cost is mostly borne by utilities.

Too rapid an increase in generation from renewables is financially weakening German utilities, which make only a fraction of the revenue dispatching renewable power as from conventional sources. The value of Europe’s top 20 utilities has fallen from €1 trillion (USD $1.3 trillion) in 2008 to €500 billion (USD $630 billion) in 2013. According to The Economist, European grid upgrades by 2020 are expected to cost up to €1 trillion, and “companies worth €500 billion cannot finance anything like that amount… In their current state, utilities cannot finance Europe’s hoped-for clean energy system.”

Thus, crippling these utilities is potentially problematic for reliability because it lowers the potential for investment in the modernized grid. This concern, however, has yet to erode Germany’s electric grid reliability in practice.

According to the Heinrich Böll Foundation, “even the strongest proponents of Energiewende agree that Germany needs to reform its energy system to accommodate the next influx of renewable energies.”

However, solutions exist to this problem that are not revolutionary. For example, a shift away from the “energy-only” market, in which utilities are only paid to produce and deliver energy, to one that is more profitable for utilities as renewables take over the generation mix. Potential structures include “capacity” and “capabilities” markets.

In a capacity market, utilities are not compensated for the energy they produce, but instead for what they have on reserve for immediate use when faced with reliability challenges. But this model does not give preference to any particular energy source. A capabilities market, however, attempts to prioritize power generation that guarantees low CO2 emissions. Natural gas-fired plants, energy storage, demand response, and renewable energy resources are just a few examples of the reliability measures that might be prioritized over a coal-fired “peaker” plant when trying to meet the demands of a strained electric grid.

The highest quality data supports the conclusion Germany’s grid reliability during Energiewende has been an unequivocal success so far. Opponents levy negative commentaries on this subject, and there is certainly still room for improvement regarding energy markets, but there is no doubt the German experience, as an international model, proves a clean grid can also be a reliable one.

This post by Peter Sopher, Energy Policy Analyst at Environmental Defense Fund, was first published on EDF’s Energy Exchange blog, where it is the third blog post in a six-part series on Energiewende, which will describe best practices gleaned from the German experience and examine their U.S. applicability and is reposted with permission.