Over the weekend, Germany’s Energieblogger met at SMA’s headquarters in Kassel for a barcamp to discuss the hottest topics in the renewables sector, do some strategic planning, and – most importantly – finally have a face-to-face chat with colleagues they otherwise only communicate with virtually. The group has grown tremendously over the past year and is now a major collective voice for the Energiewende. Craig Morris explains.

Last year, the Energy Bloggers met at SMA’s solar-powered off-grid conference building to discuss how to work together. From 19 founding members, the group has grown to roughly 50 bloggers.

In its first year of collaboration, the group has already made an impact. It reviewed various proposals for amendments to Germany’s Renewable Energy Act and chose a winner in a contest entitled “Germany’s Top EEG,” which drew quite a bit of attention. Nonetheless, the proposal chosen (Eurosolar’s) was one far from the amendments eventually adopted. 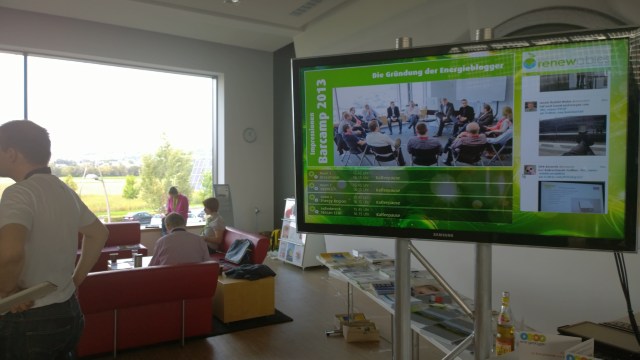 The screen in the foyer of the barcamp shows the 19 founding members of the Energy Bloggers at the event in 2013. This year, more than 100 people attended. (Photo: Craig Morris)

The group also made a big splash at last year’s Intersolar in Munich, partly because the bloggers got such coveted speakers as economist Claudia Kemfert and Hans-Josef Fell, the now-retired parliamentarian who co-authored the Renewable Energy Act in 2000, to stop by. “A lot of other companies and organizations were jealous,” said founding member Björn-Lars Kuhn. The participation of such prominent speakers was a clear indication that these top-level players see the Energy Bloggers as a non-partisan group representing the interests of everyone on the ground doing the hands-on work for the transition.

Ironically – but fortuitously – the Energy Bloggers had a stand at Intersolar right next to German coal power giant RWE, which led to some interesting discussions. Indeed, one of the major topics for the group this year was how to deal with attempts by the conventional energy world to join the group. The general feeling was that the group’s image should not be diluted by the participation of companies and organizations that have historically not represented citizens and energy cooperatives – and in some cases even fought them. In the end, a decision was made to draw up specific requirements (list in German) for membership eligibility, thereby ruling out organizations that could be accused of greenwashing.

However, the group remains open to dialogue with everyone. A few representatives of RWE and EnBW were thus also on hand at the barcamp, along with numerous representatives of small companies both with and without blogs. A representative of RWE Effizienz rejected the charge of greenwashing in one of the sessions, saying “my colleagues and I are as devoted to the cause as all of you.” The general consensus, however, was that personal commitment of individuals is not in question; there are good people working for entities that drive a different agenda.

The representative of EnBW is a case in point. Hubertus Grass was a member of the Green Party on the City Council of Aachen way back at the end of the 1980s, when the town became one of the first to adopt feed-in tariffs just two years before they became federal law. One of Germany’s Big Four utilities, EnBW is owned largely by the state of Baden-Württemberg, which elected the country’s first Green governor two years ago. The Greens thus now find themselves owning two running nuclear power plants and responsible for three other decommissioned ones currently being dismantled. Grass is part of a fundamental shift in corporate culture at EnBW. (If you speak German, you can see him in an interview with the utility’s CEO here.)

Overall, the Energy Bloggers themselves are a good example of how individuals are needed to change organizations from the inside out – or perhaps I should say from the bottom up.

And by the way, if you are an international blogger and wish to connect with this group, an English forum has now been established. To join, write an email to joinin@energieblogger.net with an explanation of your interest and a link to your blog. And if you are a reader, you will have to make do with the German feed of all of the blog posts for the moment. An English feed is available but largely empty. At the moment, it practically only consists of posts from SMA’s blog, which would be drowned out by my numerous posts both here and from Renewables International.