Biomass is the largest source of renewable energy in Germany, but the German government has scaled back support in recent years. Under the amendments to the German Renewable Energy Act to become law in August, support would be reduced even further. Craig Morris investigates.

Wood pellets can be a sustainable source of heat and power. (Photo by EnergieAgentur.NRW, CC BY 2.0)

Biomass is so big because it is so versatile. You can generate electricity and heat from it, or use it to make liquid fuels.

The EU specifies a minimum blend of biofuels in diesel and gasoline, but there are no plans to increase that relatively small share. Biofuel makes up seven percent of diesel and up to 10 percent of gasoline, the latter being called E10. But German consumers did not like E10 when it was rolled out in 2011; they saw the new fuel as an unnecessary risk (a small number of car engines could have been damaged) and an ineffective way of protecting the climate.

All forms of biomass face the latter criticism: is it even sustainable? Germany is big on wood pellets, originally a fantastic idea. Waste wood – sawdust and wood chips – were to be recovered and compressed into pellets to make them “pourable.” You then do not have to get up in the middle of the night to put another log on the fire. Rather, your heating system can continually draw pellets in continuously at the rate needed.

As a source of domestic heat from waste products, wood pellets thus made home wood-fired stoves both convenient and sustainable. But other EU countries, such as the UK and the Netherlands, began co-firing wood pellets in coal plants. Demand rose, and countries from Canada to the US, Brazil, and Russia began making pellets from fresh timber at lower prices. Now, the EU imports biomass from forests around the planet. The carbon savings are attributed to the coal plants, while the emissions from shipping are not attributed to the country consuming the pellets (carbon leakage). Critics argue that it would be better to simply burn the oil used to ship the pellets instead.

The market for wood pellets in Germany continues to grow. At the bottom, we have an estimated 116,500 small pellet stoves (gray area), followed by 241,500 cogeneration units smaller than 50 kW, and an additional 10,500 larger than 50 kW.

The biodiesel market grew up until 2003 because it was not subject to the fuel tax, but the full tax was applied starting in 2004. Since then, a mandatory requirement for a blend of biodiesel in the EU has been the main driver for the product, which is not cheaper than ordinary diesel without the tax incentive.

Likewise, biogas cogeneration units are on a stop-and-go market, as the following chart shows: 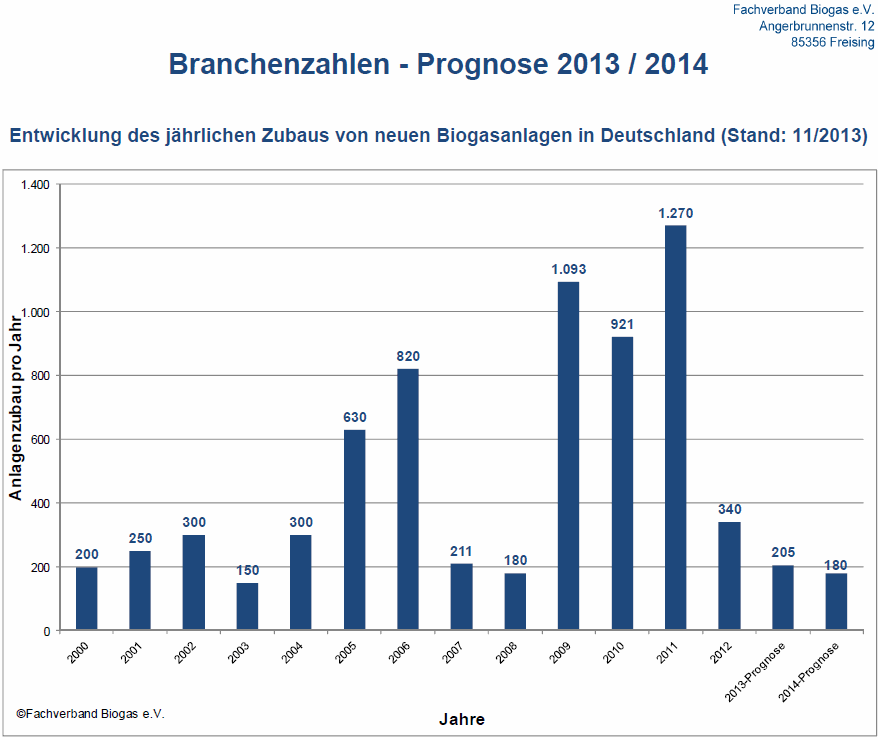 Here, we see the number of new biogas units built per year. The main issues here are costs and sustainability. For a few years up to 2012, Germany paid a bonus (see this German Wikipedia entry) for biomass that fulfilled specific sustainability criteria; the result after the bonus of up to 0.06 euros had been added was prices around 0.20 euros (27 US cents) per kilowatt-hour. But without that focus on sustainability, people are concerned about the conflict between energy crops and food crops.

The new German government now plans to limit the growth of biomass units to 100 MW per year – and focus on the least expensive systems in the process. In addition, the focus will be on the use of waste products, not new crops.

The German biomass sector has responded to criticism of sustainability by pointing out the double standard: we have strict regulations for energy crops, but practically everything else – from furniture to clear-cutting for cattle farming – goes largely unregulated. Indeed, an estimated 12 percent of German agricultural land is used for energy crops, compared to 28 percent for food production – and 57 percent for animal feed. In other words, if you are concerned about the impact of agriculture, become a vegetarian.