Paris-based renewables organization REN21 has published the latest edition of its annual Global Status Report. The 2014 edition finds that, while Europe and North America have become roller coaster markets for renewables, developing and emerging countries have picked up the slack and could be the future leaders. Craig Morris investigates. 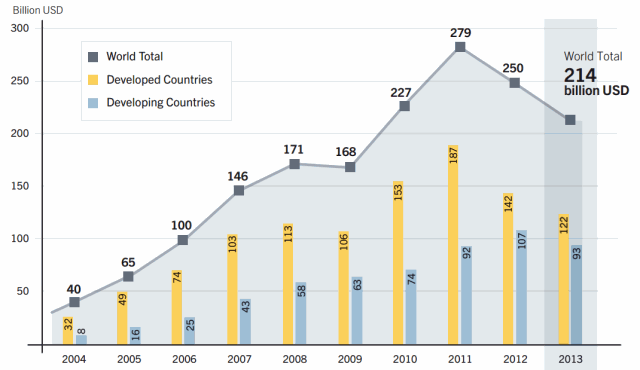 The price of PV has fallen dramatically since 2011, so overall expenditures are down – but don’t misunderstand this as less investment. More PV than ever is going up, especially in developing countries. (Graph by REN21)

On June 4, REN21 presented its latest report at the German UN office in New York City, where a Sustainable Energy for All Forum (SE4All) took place. SE4All is the UN Secretary-General’s campaign for clean, sustainable energy for everyone by 2030. At present, more than 1 billion people still have no access to clean energy.

How appropriate, then, that REN21 found so much progress outside of the developed world. And it’s not just China. For instance, Uruguay, Mauritius, and Costa Rica were near the top of the list in terms of how much they invested relative to their gross domestic product. And while Scotland wants to get all of its electricity (net) from renewables by 2020, it is not alone – so do Djibouti and Tuvalu. In light of their isolation, however, the latter are likely to have 100 percent renewable power in absolute terms, not net. (Scotland will, of course, continue to trade power with England.)

Of course, in absolute terms the big countries continue to dominate. China, the US, Brazil, Canada, and Germany still have the greatest renewable power generation capacity.

Worldwide, PV now outstrips wind power in new growth; in 2013, more PV than wind power was installed globally for the first time, with photovoltaics reaching a new record of 38 GW. PV markets are expected to continue this strong growth over the midterm, so PV will probably remain king for the foreseeable future.

And then there is the statement that everyone makes, but I still don’t like: more than half of net additions to global installed power generation capacity came from renewables. The problem is that one GW of wind/solar capacity is simply not equivalent to one GW of coal/gas/nuclear. The latter run more or less all the time – say, at 60 to 90 percent of capacity over the year generally. Wind and solar run depending on the weather, with the capacity factor of wind ranging from 20 to 40 percent internationally, while solar is generally below 20 percent. So it takes several GW of wind and solar to replace one GW of conventional capacity – which makes the direct comparison unfair.

Still, it is heartening to know the world as a whole is increasingly on the right path. Perhaps the most encouraging bit of news is that the number of developing and emerging countries with policies for renewable energy rose from 15 in 2005 to 95 at the beginning of 2014. These countries now make up more than two thirds of the 144 countries worldwide with renewables policies.

It’s worth noting that the success of PV is something that sunny, poorer countries will benefit from tremendously. The price of PV plummeted from 2006-2013 and will continue to fall. We have mainly Germany and China to thank for this outcome. But their cooperation came about by chance; it was not intentional. If the energy transition is to continue to progress, we cannot hope for such fortunate happenstance to occur again. We need international cooperation – and organizations like REN21 to promote such collaboration.