The Heinrich Boell Foundation’s Brussels office has published a study investigating the cost of a transition to renewable electricity. Craig Morris says the study impressively shows that individual renewable technologies are the best option, but he wonders if the study will convince all doubters.

Onshore Wind is already competitive with coal today – not to mention the ever rising cost for new nuclear power plants.  (Photo by Alexander Franke)

The author of the study (PDF), Uwe Nestle, brings in his vast knowledge about the issue quite well. A former staff member at the German Environmental Ministry, Nestle is also a board member at Green Budget Germany, which has done some excellent work in the past few years showing that the subsidies given to nuclear and fossil fuels in Germany over the past few decades vastly exceed those for renewables. Likewise, the GBG quickly produced a rebuttal to then-Energy Minister Peter Altmaier’s off-the-cuff estimate that the energy transition would cost a trillion euros, pointing out that the Minister had neglected to subtract the cost of all the energy offset in the process. In this study, Nestle estimates that savings from Germany’s energy transition “will amount to more than 500 billion euros” in the 2030s alone, once the current feed-in tariffs for the solar arrays built when PV was expensive expire (see my discussion of legacy power). 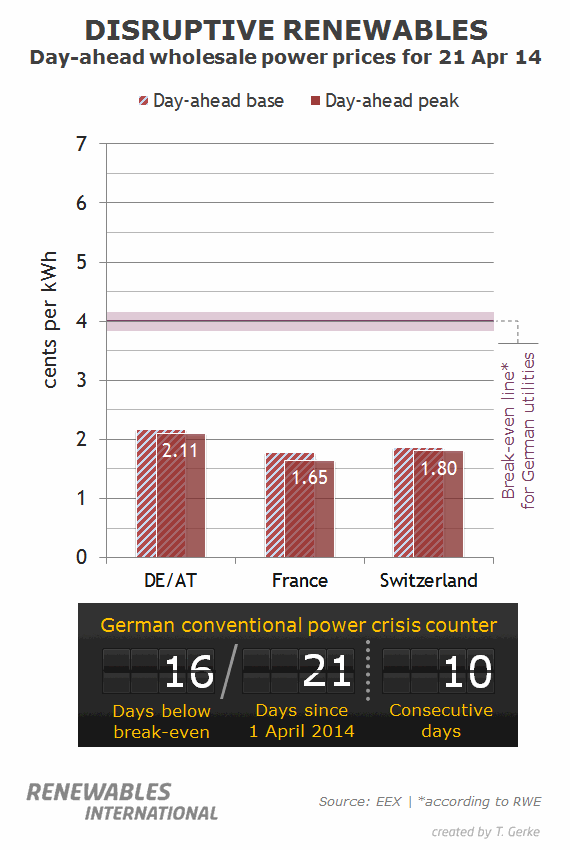 At the beginning of the month, Craig Morris launched a new series of charts on “disruptive renewables” to illustrate the dire situation of conventional power on the German wholesale market. Follow him on Twitter – @PPchef – to keep up with the daily updates.

Entitled “Renewables: the only path to a secure, affordable and climate-friendly energy system by 2030,” the study points out that these externalities will continue to make nuclear and fossil fuel more expensive than renewables. It also points out the need to compare new renewables with the cost of new fossil and nuclear capacity, not the old plants we now have. They will largely not be in operation in 2050, by the time the transition has to be accomplished at the latest; furthermore, prices on wholesale markets represent only fuel and O&M costs, not total facility costs. German wholesale prices are headed south and seem poised to remain consistently below the four cents per kilowatt-hour that German utilities say they need to be profitable with their old units.

In a chapter called “the failure of the existing electricity market,” Nestle points out that wholesale prices are currently too low to incentivize not only new renewable installations, but also new conventional capacity, which come in at a price range “between 7 and 11 ct/kWh.” Likewise, his critique of Germany’s renewable surcharge is poignant; like Öko-Institut’s Felix Matthes, he argues that the surcharge is not a good indicator of the cost of the transition at all. Nestle explains that offset conventional fuel costs are added to the surcharge, but if we subtracted the cost of new plant construction, the cost of onshore wind “might even be negative.”

Since the price of new nuclear was announced in the UK, we have been able to compare the true current cost of nuclear power with new renewables.

But the real question is not whether wind or solar is cheaper than nuclear or fossil energy. The bigger issue is whether the storage and backup capacity (which will frequently be idled) required for a power supply largely consisting of wind + solar will make this option more expensive. Nestle references a recent Agora study, which found that a whopping 20 GW of dispatchable capacity would run for fewer than 200 hours a year – out of around 8,760.

Nestle estimates that 20 GW of conventional open-cycle gas turbines (OCGTs) – as opposed to combined-cycle gas turbines (CCGTs), which are less flexible, but more efficient – running for so few hours would only add “around 0.15 to 0.3 ct/kWh” to power prices. But the study only lists this option as an example that can be calculated today, not as the best option. Indeed, Nestle mentions a vast range of options, including better connections with hydropower in Norway.

In light of all these uncertainties, the conclusion is stated with prudent modesty: the cost of power supply based largely on renewables would be roughly the same as a supply based on new conventional power plants, even with consideration of backup capacity – but “without taking external costs into consideration.” The statement may not be forceful enough to convince all skeptics, but they also have the opportunity to prove the opposite.