Can the Ukraine crisis force Germany to backtrack on the Energiewende? No, regardless of Poland’s off-the-cuff critique. But it’s fueling anew the debate in Germany over supply security. Renewables could go a long way toward bolstering Germany’s energy security vis-à-vis Russia, while energy-saving measures could be the true clincher.

The Ukraine crisis has starkly underscored (again) how dependent Germany, and indeed much of Europe, is on Russian hydrocarbon imports – and how quickly and dramatically shifting political sands could upend business as usual. Even if the crisis disappeared tomorrow, the questions it raises about supply security in the age of the Energiewende now loom even larger, especially as Germany’s monumental clean energy switch enters a new phase with its renewable power supply approaching the 30-percent mark.

In Germany, Tusk’s logic makes sense to the fossil-fuel lobby and their remaining spokesmen in the Bundestag, like Christian Democrat MP Michael Fuchs. “Donald Tusk is absolutely right,” he said. “We can’t be too dependent on one supplier … We have to correct the energiewende.”

Russian gas and oil are indeed very important to Germany, in particular gas for heating; only a small volume of the gas supply is used for electricity generation. Nearly 40 percent of Germany’s gas comes from Russia (Norway supplies 35 percent, the Netherlands 22 percent). As for Russia, 70 percent of Russia’s exports to Germany – its third largest trading partner – are in the form of hydrocarbons. This significant, mutually beneficial relationship is why most energy experts doubt that even “a new Cold War” will fundamentally alter the status quo. Most of the gas and oil contracts are so-called long-term contracts of 15 to 25 years anyway. Moreover, with an increasingly diversified gas market, alternatives to Russian gas are ever more plentiful.

Yet, whether push comes to shove or not between the EU and Russia, the heightened risk factor is there, as are worst-case scenarios posing interrupted supply.

So, the first question: Might the ongoing crisis cause Germany to rethink its nuclear power phase-out? After all, Germany is currently scrambling to ensure reserve power capacity for the day when the next batch of nuclear reactors go offline. Nuclear power currently provides a sizable chuck of Germany’s “must-run capacity” which will have to be replaced. State-of-the-art gas-fired works are meant to provide most of this flexible reserve capacity. But what if the gas isn’t there?

The response from Berlin is unequivocally “Nein.” The nuclear phase-out is etched in stone, German officials underscored again on the third anniversary of the Fukushima disaster on March 11. There’s no discussion at the moment in Germany about reversing or even extending the duration of the phase-out. There are a range of options under discussion for addressing the capacity dilemma, as the Berlin-based think tank Agora Energiewende points out, all of which relieve the burden on gas in terms of reserve capacity. The Merkel government is currently deliberating on which measures to pursue.

Furthermore, when it comes to nuclear power there’s a point that Tusk and the other nuclear-minded Central Europeans gloss over: 30 percent of the uranium used as fuel in EU Europe’s nuclear power plants is imported from Russia, the bloc’s largest single source. If nuclear power is meant to decrease dependence on Russia, this supply would have to be replaced.

Naturally, the first place to look to bolster the security of gas supply is not nuclear power but gas-supply alternatives to Gazprom. One option is unconventional gas like shale gas: either imported from the US or domestically produced in Germany and in Europe as a whole. The possibility of US exports appeals to both the Central Europeans (who buy 70 to 100 percent of their gas from Russia) and much of the US political establishment, which thinks it can both be lucrative and have a geostrategic impact.

Yet the US is at least two years away from having the infrastructure in place to export any liquified natural gas (LNG) across the Atlantic, much less enough to make a real dent in Russian exports. Nor is there consensus, even in the US among energy experts, that shale gas reserves in US are plentiful enough to export abroad. As for domestic production in Europe, there is neither consensus on the extent of shale gas reserves nor on the ecological fallout of hydraulic fracking. For the moment at least, the Central Europeans are pretty much alone in their enthusiasm for shale gas.

Tusk didn’t mention the option of biogas, for example in the form of bio-methane, which some German experts argue [DE] has the potential to replace as much as a sixth of Germany’s natural gas consumption. Some 125 biogas plants currently feed bio-methane into Germany’s gas grid, accounting for just a sliver of Germany’s heat generation. Most of it is used in decentralized combined heat and power (CHP) plants, which, among other things, can provide flexible reserve power capacity. But biogas potential studies from the Fachagentur Nachwachsende Rohstoffe estimate that biogas in Germany offers a technical primary energy potential of 500 petajoule a year by 2020. (The potential in Poland, Belarus, and Ukraine is considerably greater.)

And then, according to Tusk, there is coal. Germany and Poland are the two biggest consumers of coal in the EU. In Poland, coal generates 92 percent of its electricity and 89 percent of its heat; Germany generates 45 percent of its power with coal, a figure that has crept upwards in the last two years, a distinct blemish on the energiewende. Poland clearly sees its own coal reserves, the volume of which is hotly disputed, as a means to energy independence. Standing in its way, as well as in the way of the German coal industry, are EU climate targets, currently under negotiation for 2030.

Yet both Poland and Germany, among other EU countries, import significant amounts of coal from Russia. (In 2010, the origin of 27 percent of the EU’s imported hard coal was Russia.) Russia accounts for just under 30 percent of Germany’s coal imports, second only to Columbia. The Polish coal industry, meanwhile, is in deep crisis; the high cost of its coal production forces the country to import more than it exports. Its primary source for black coal today: Russia. Once the EU emissions trading scheme is finally working, Polish coal will become even more costly compared to Russian coal.

In fact, “more energiewende” may be just what the doctor ordered to wean Germany off Russian gas. Compared to the greening of its power sector, Germany has lagged far behind in transforming its heating sector. But in order to meet its own targets for greenhouse gas reduction, argues Agora Energiewende, energy consumption for heating must decrease and renewables must replace oil and gas in heat generation almost entirely. While Agora claims that the potential of bioenergy is relatively limited, it argues that “in the long run, both the heat sector and the transportation sector must increase their utilization of electricity from wind and PV.” CHP plants already link the electricity and heat sectors, producing both heat and power.

Indeed, some of these options are terra incognita, unlike the most effective, cost-relevant, and undisputed means to decrease imports and secure supply in the heating sector – namely energy efficiency. According to a 2013 study by the German Energy Agency (DENA), by 2020 energy efficiency measures could cut Germany’s final energy consumption in the heating sector (covering all sectors and energy sources, not just natural gas) by 16 percent. DENA estimates that by 2050, Germany could reduce its heat consumption in residential buildings by 60 percent, while renewables could cover another 20 percent of 2008-based consumption (see graphic). 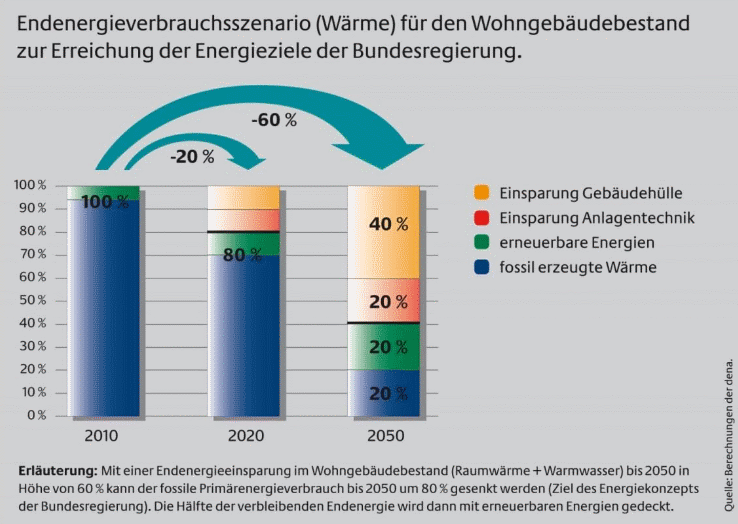 In addition to bio-methane, geothermal and solar thermal systems, as well as wood-burning boilers and other biomass systems, are heating technologies that “can often be competitive with those using fossil fuels,” according to the IEA.

These are options that Donald Tusk would do well to consider before selling short the potential of the energiewende.

Paul Hockenos is a Berlin-based journalist and author of the Going Renewable blog, where this post was first published.