Germans are increasingly investigating “energy poverty” – and discovering that electricity is a smaller item than motor fuel and heat. The State of Baden-Württemberg, where our Craig Morris lives, recently published an overview for the state.

Germans spend more on motor fuel and heating than electricity. (Photo by Simone Ramella, CC BY 2.0)

The findings in the recent study (PDF in German) will not come as much of a surprise to readers of this blog. So as not to bury the lede, let’s start with my favorite finding: the retail power rate is expected to rise from the average of 28.84 cents in 2013 to around 32 cents by 2020, more or less in line with inflation at a 2.0 percent annual increase.

Power makes up 27 percent of the average household’s energy expenses, less than the 37 percent for heat and 36 percent for motor fuels. The state’s Environmental Minister Franz Untersteller concludes that “we can’t just talk about power prices and the renewables surcharge when we discuss the affordability of energy.” 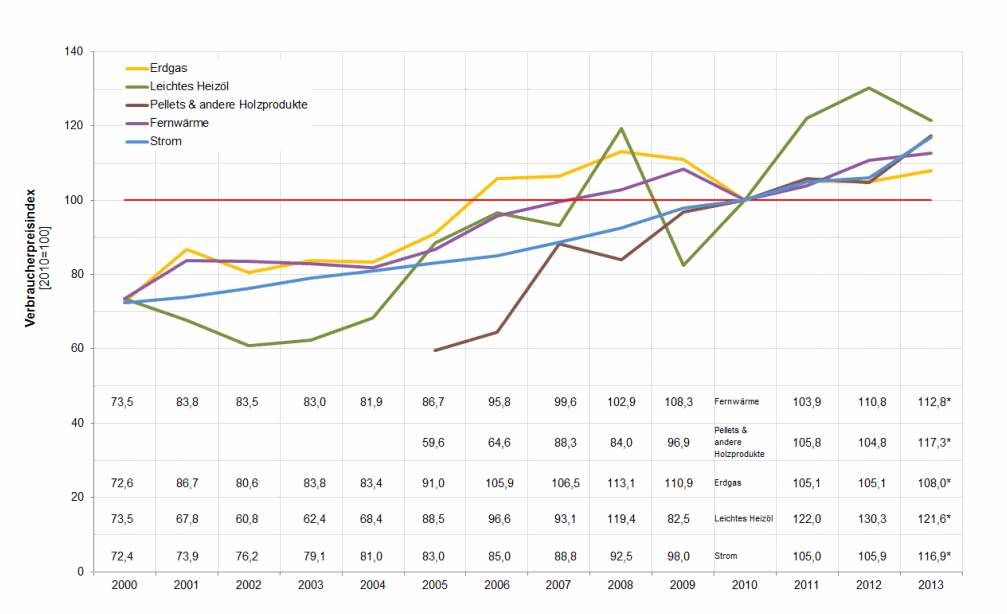 It’s not easy for households to decide which source of heat is the best investment. The price of heating oil (ironically, the green line) seems to have fluctuated the most, while the cost of heat from natural gas has risen the least relative to the baseline in 2010. District heat (purple) does not fluctuate much, but it has also risen reliably; more importantly, district heat is not something you can simply opt for or against – your entire neighborhood either has a connection or it doesn’t. The price of the renewable option of wood pellets and other wood products (brown) has unfortunately risen the most since 2005. The blue line represents heat from electricity. Note that these prices are not absolute; they are relative to the price level of 2010. Source: Baden-Württemberg Environmental Ministry

The study also revealed that power makes up the smallest share of household expenditures in Baden-Württemberg, a relatively rich state. The average German family spends only 2.65 percent of its purchasing power on electricity. The figure is higher in the poorer states towards the northeast. 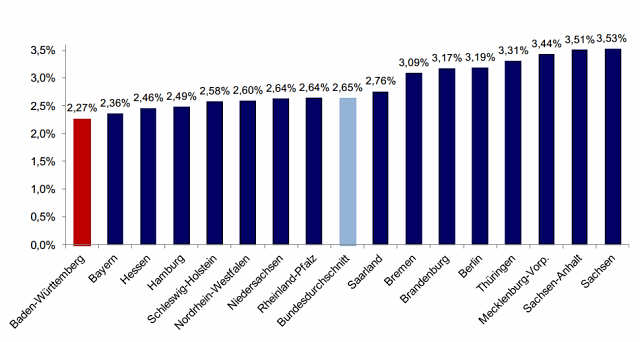 Indeed, the ones hit the hardest by the rise in electricity rates are not households anyway. From 2003 to 2012, they saw their power prices increase by 27.4 percent (inflation-adjusted), but rates for industrial firms that are not exempt from the renewables surcharge have nearly doubled (a 91.7 percent increase). Here, we clearly see how important the current conflict between Brussels and Berlin is over industry exemptions. Energy-intensive industry has always been exempt (the idea came from the original law adopted by the Social Democrats and Greens), but exemptions have grown more than fourfold under Chancellor Merkel, who took office in 2005. The real divide in Germany is not between rich and poor households, but between corporations that are exempt and SMEs that are not. 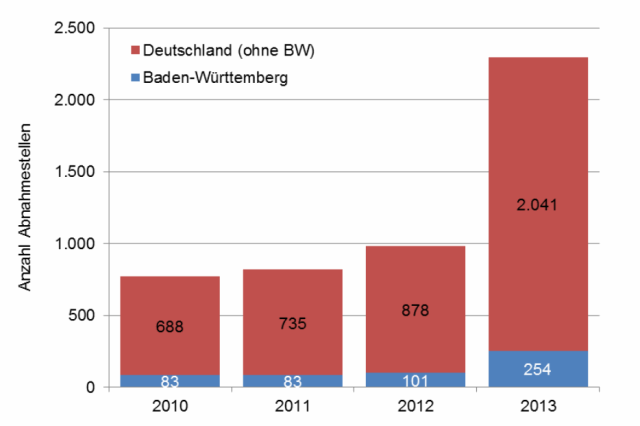 The number of “grid connection points” (nearly equivalent to, but not synonymous with the number of companies) partly exempt from the renewables surcharge in Germany. The blue area at the bottom represents the state of Baden-Württemberg; the red area, the rest of Germany.

Let’s not forget the one thing no one is talking about – power prices could plummet starting around 2030, when feed-in tariffs expire for the large number of expensive solar arrays built around 2010 (see my discussion of “legacy power“). These arrays will continue to generate a lot of electricity; their product warranties stipulate that they should still be able to produce at least 80 percent of their rated capacity after 25 years of use. The head of Fraunhofer ISE, Europe’s largest PV research institute (based in Baden-Württemberg), recently told me that current panels are probably good for 30 to 35 years.

In other words, we have further evidence that the worst is behind us. Germany will continue to have some of the highest retail power prices in the EU, but they will only rise in line with inflation. And then, in the 2030s German power prices will begin to drop, and the investments made today will pay off.