Germany’s power plants fired with hard coal might soon run for fewer and fewer hours each year, being increasingly offset by renewables. Now, a labor union has called on power firms to sell these power plants to a “national company” as hard coal is phased out. Craig Morris says the firms like the idea.

Take a look at this chart: 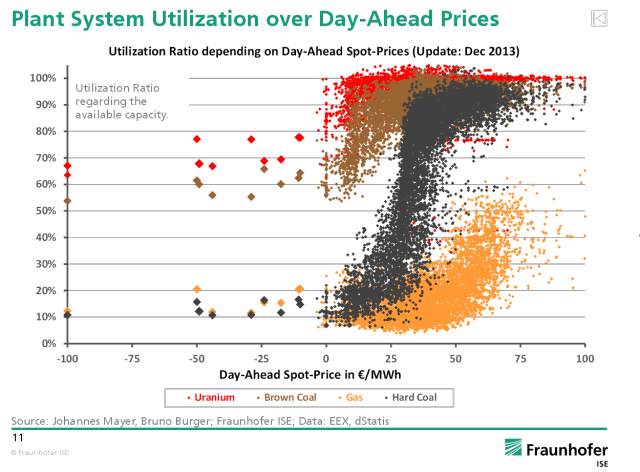 It shows how often Germany’s various power plants run in relation to day-ahead prices. At the bottom, we see that natural gas turbines almost never run above 50 percent of their rated capacity; renewable electricity has offset the need for a large chunk of peak power, which gas turbines used to serve.

At the top, we see that nuclear plants continue to run at full capacity as often as possible, only dropping below 80 percent capacity on rare occasions. The result is then negative prices on the exchange, meaning that the plant operators would rather pay you to take the power off their hands than ramp down even further. Clearly, nuclear reactors do not ramp well.

Next comes coal, but there is a big difference between brown coal and hard coal. The former often runs near full capacity, dropping only to around 60 percent capacity sometimes. In contrast, hard coal plants regularly ramp up and down. Essentially, renewables offset these power sources from bottom to top, meaning that the chart shows the merit order on its head.

According to German utility organization BDEW (PDF), the capacity factor of natural gas turbines fell by a quarter from 2010-2012 (figures for 2013 not yet published). Natural gas turbines now run for only 2,640 equivalent full-load hours, down from 3,400 in 2010. Hard coal was still holding firm, however, but is the next to go.

Nuclear will completely disappear from the top of the first chart by 2022, creating more space for coal, but brown coal will benefit the most. Hard coal will continue to come under pressure from renewables.

Labor unions in the coal sector now see the writing on the wall for hard coal plants. To protect jobs, they want German power companies sell their power plants to a “national company” based on the model of RAG, which mainly does business in coal mining. Germany has long subsidized domestic hard coal production, but those subsidies are to end in 2018. German hard coal is not competitive on global markets, so Germany increasingly imports its hard coal. The new “national” firm would not be state-owned, but losses might be passed on to taxpayers, as was done with RAG. (If you can read German, there’s an excellent overview here.)

Basically, the labor union is trying to protect 5,000 jobs spread across nearly 30 gigawatts of hard coal generation capacity that will increasingly be unprofitable. The labor union is positioning itself as a future recipient of capacity payments and says a national company would require less subsidization than the current “splintered” market.

Perhaps most interestingly, a spokesperson for power giant Eon says the idea is “interesting” but adds that “a capacity market for conventional power plants will be decisive.” In other words, firms will be happy to have their conventional coal plants subsidized regardless of whether it requires them to sell their hard coal plants first.

It’s highly unlikely that the EU will play along with the proposal, if it moves forward at all. Brussels wanted Germany to phase out its subsidies for coal miners by 2014, but in 2010 Chancellor Merkel got the Commission to accept 2018 as a compromise. (And if you’re wondering why Merkel sent Oettinger to Brussels as Energy Commissioner, you’ll want to read this article.)

For German supporters of the Energiewende, it will be crucial to make capacity payments contingent upon low carbon emissions so that natural gas receives more support than coal power. And for the outside world, the news is further evidence that the German coal sector itself does not believe it is undergoing a renaissance, but is in fact in trouble. One reader of this German blog labeled the proposal a “bad bank for hard coal.”