International onlookers sometimes wonder when shale gas will get going in Germany. Americans in particular think, based on their own shale boom, that the Germans could reduce their carbon emissions and lower their energy prices with shale gas. Craig Morris says the situation looks much different within Germany.

Shale gas well in Poland – most likely to stay an exception in Europe, where public opinion towards shale gas is largely critical. (Photo by Karol Karolus, CC BY-SA 3.0)

In Europe, shale gas is unpopular. France has already banned it outright. The German government says that shale gas production can proceed “as soon as environmental concerns are assuaged” – which could be a diplomatic way of saying “never.” In February 2013, then-Environmental Minister Peter Altmaier said:

“I do not see fracking being used anywhere in Germany in the foreseeable future… To everyone who thinks I’m too careful about fracking: I don’t know any town or community that would accept it.”

The current coalition agreement of November 2013 between the CDU and the SPD did not change that stance.

German shale gas reserves are estimated to be large enough to cover 13 years of the country’s gas supply. Of course, the country would not shut down all imports of gas for 13 years, nor would it make sense to do so. Rather, domestic reserves would be stretched across decades, offsetting imports in the process. 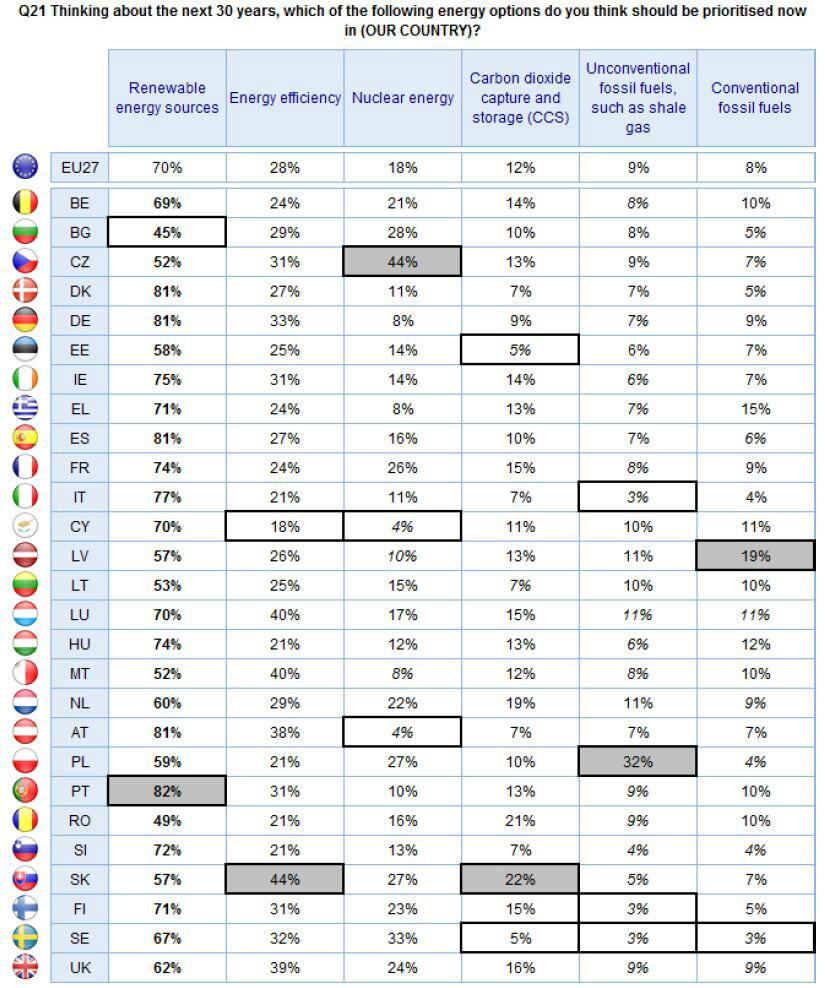 Figure : Poland is the only country in the EU that has any level of popular support for shale gas, and even there only 32% of those surveyed want to have it. (Source: EU)

During that time, we would run the risk of contaminating ground water and the environment. In the US, dozens of families have been affected by individual wells. Because Germany is so much more densely populated, thousands could be affected in single cases. Germans therefore wonder why they should take the risk just for 13 equivalent years of slightly more energy independence.

One reason could be lower prices. In the US, gas prices dropped, but only in parts of the country; the US does not have not a contiguous gas network. Germany, in contrast, is part of a gas network connecting Russia to the Netherlands; northern Africa is connected to Mediterranean Europe. If shale gas were made available, it could be sold to the highest bidder through a large network of buyers, so prices would not drop.

A recent publication (May 2013) by Friends of the Earth found that the potential of shale gas may also be overstated:

In Europe in particular, FOE sees the aforementioned combination of population density and water scarcity as a general problem. Furthermore, a study conducted by the German KfW bank found that the US industrial sector overall had not become more competitive with the German industrial sector during the shale boom largely because energy prices make up such a small share of total costs (two percent), though the situation is different for a small number of firms that specifically consumer large amounts of natural gas.

Finally, low fossil fuel prices are not a goal of the Energiewende; keeping carbon in the ground is. As laudable as the efforts are to curb carbon emissions by switching from coal to shale gas, in the end we just take more carbon from the ground when we extract shale gas. What the world needs is an energy alternative that allows us to leave both fossil reserves in the ground. Germany is working on the most promising alternative now: renewables in combination with efficiency.