In December, Germany’s Network Agency, which oversees the electricity grid, published its monitoring report for 2013. Craig Morris does us the favor of reviewing the full German edition. Today, he focuses on what the report says about reserve capacity.

Even if you speak German, you will probably want to read the 29-page summary in English (PDF) of the 321-page full report in German (PDF). And while the report is for 2013, it mainly (though not exclusively) concerns data from 2012. But if you do stick to the short version, you will miss some of the goodies. 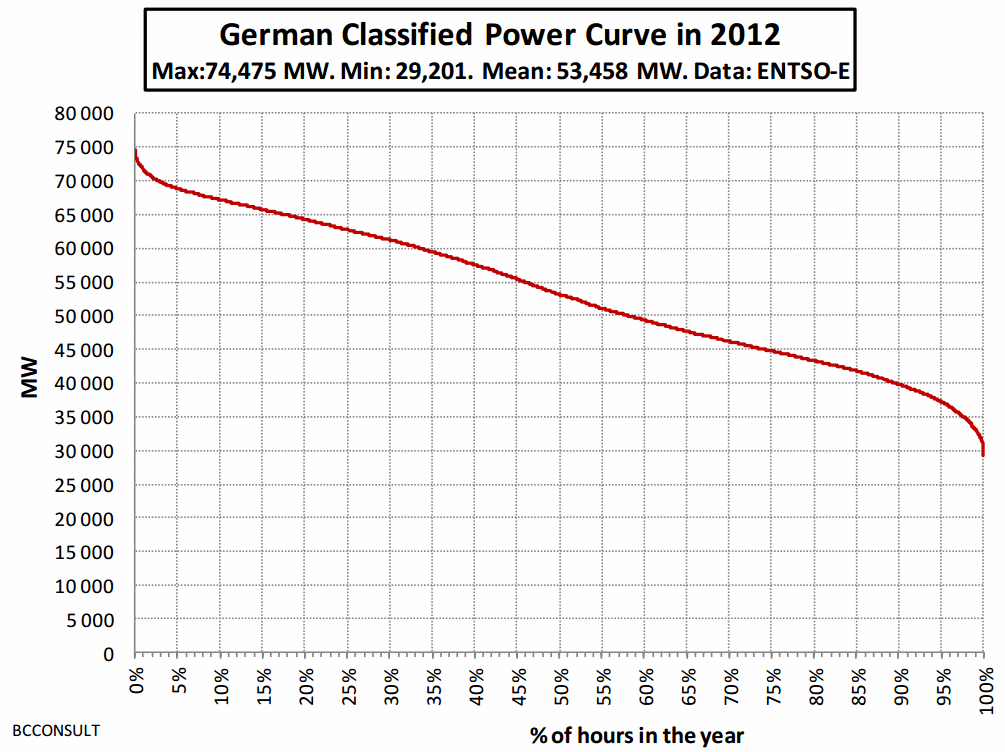 The frequency of German power demand over the course of 2012. We see that demand peaks just below 75 GW but is generally below 70 GW. At the other end, it seldom drops below 30 GW and is generally above 40 GW. Around 88 percent of the time, German power plants thus have to serve demand ranging from 40-70 GW. But the Network Agency does not provide us with this information; the chart is from French energy expert Bernard Chabot.

Let’s start with re-dispatching, an indication that grid operators have to react to unexpected power flows – the report says that Transmission System Operators (TSOs) had to re-dispatch for 7,160 hours, 42.3 percent more than in 2011. The total amount of electricity involved (2.6 TWh) is, however, still only around 0.5 percent of total power production. Obviously, such an increase could be considered skyrocketing, but is less than one percent of power production low or high in an international comparison? Neither the short nor the long version of the report tell us, and I do not know where to find such data for any other country – please use the comment box below if you do.

How bad is the situation getting? Germany had 2.6 GW of reserve capacity to make it through the winter, when power demand peaks. These plants are technically off but on standby just in case, so they receive special compensation. In the previous winter of 2011/12, this reserve capacity was used in the first winter after the sudden nuclear phaseout of March 2011, which drew a lot of headlines. It turned out, however, that gas supplies to some power plants in southern Germany had been discontinued during a long cold spell; natural gas for heating has a priority over gas for power generation. The situation in the winter of 2012/13 was less severe, and the reserve plants were only used from January 29-30.

Indeed, while everyone seems concerned about the reliability of renewables, the full report says speaks only of a “critical overload on the transmission grid” on 25-26 March 2013, when “four power plants in southern Germany simultaneously failed.” It turns out that the reserve plants were not able to react because “they take several hours to ramp up”; in other words, shortfalls have to be foreseeable for the reserve capacity to do any good.

Obviously, wind and solar power require backup capacity; no one doubts that. The problem comes when we assume that this situation is somehow new. In fact, Germany has always had far more installed generation capacity than it needs to meet peak demand, and conventional plants also fail unexpectedly. While everyone was worried about the effect of Xaver (the storm that hit northern Europe in early December) on wind farms, they actually performed well; to my knowledge, no turbines in Germany were damaged. But one nuclear plant suddenly and unexpectedly failed entirely, the equivalent of 1,000 wind turbines failed simultaneously.

Germany currently has peak power demand of around 75 GW, but its installed conventional capacity is 102.6 GW – not counting 75.6 GW in renewables according to the Monitoring Report. In my next post, I take a look at how that trend is expected to develop.