The EU’s new targets for 2030 are only for emissions trading. Anything adopted for renewables will not be binding, and we have yet to hear about efficiency at all. Craig Morris says we’re not going to get anywhere until we focus on all three.

The UK has successfully reduced carbon emissions from the power sector over the past two decades more than any other EU country except Germany. But instead of spearheading future progress, the two countries bicker over details – because their previous success came along much different paths. (Photo by Matthew Strmiska, CC BY-NC-SA 2.0)

The debate over 2030 targets is generally described as one between the UK, which plans to promote nuclear and shale gas, and Germany, which promotes renewables. I didn’t make up the confrontation between the two countries – here is British Energy Secretary Edward Davey himself tweeting that “I won for UK.” So who lost?

Secretary Davey should not be misunderstood as an opponent of renewables. He’s not the person who called renewables “green crap” – that was apparently Prime Minister Cameron, Davey’s boss. Davey recently told the Guardian that, “Renewables in any context, any scenario, are going to boom in the 2020s.” In his official statement, he says the new CO2 target will also lead to “many more renewables” (sic). Logically, renewables then do not need further support.

There is, of course, one thing that will stop renewables from booming: existing capacity. In its REmap 2030 roadmap (PDF), the International Renewable Energy Agency (IRENA) identifies “early retirement” of conventional capacity as one way of facilitating the further penetration of renewables (disclaimer: I served as the technical editor of that publication). Simply put, you’re not going to build wind turbines, solar panels, and biomass units if you’ve already got enough nuclear and natural gas turbines, for instance.

The UK does not, however. It is currently a major importer of electricity from the continent. The British need to build generation capacity but are not building renewables. The UK has a target of 15 percent renewable energy by 2020, though it is currently at less than five percent. The country plans to build nuclear and develop shale gas, and the British press sees the focus on carbon emissions for 2030 as facilitating those goals, not renewables. If enough nuclear plants and gas turbines are in the pipeline, the UK is not going to overbuild just to have renewables, too. 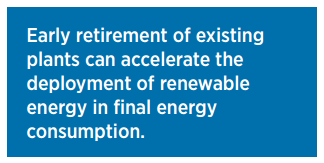 If we now adopt only carbon targets, how do we aim to meet them? A 40 percent reduction will eventually require a focus on heat and transportation, not just electricity, limiting the usefulness of nuclear. Lower emissions are easier when we reduce energy consumption, so why no efficiency target?

The discussion is being played out as though these goals were different options. In fact, they are tools in the same toolbox. Efficiency lowers consumption, renewables provide low-carbon energy (at a much lower price than new nuclear, incidentally), and emissions trading ensures that carbon is reduced within the gradually shrinking share of conventional energy.

But we’re not to do that. Could somebody please explain the logic of what we are to do? Some politicians say that we need to ensure that the transition to a low-carbon economy remains affordable and doesn’t hurt our economy. They then focus on carbon targets to protect us from the high cost of renewables, which are apparently harming a country with 5.2 percent unemployment in November (Germany), compared to 7.4 percent in the UK at the time. The British government is also willing to pay much more for new nuclear as onshore wind costs and new solar costs in Germany, allegedly in the name of protecting consumers from unnecessarily high costs.

The facts don’t matter, as the resistance to efficiency targets shows – what good reason do we have to oppose them? In the end, this is not just about the climate, not just about carbon emissions. It’s also about personalities “winning.” Over at the Carbon Brief, my colleague Mat Hope describes how top EU officials are willing to throw out all other targets so that binding carbon targets for 2030 can be a part of their legacy. So Davey, Barroso, and Hedegaard, congratulations: you win. Guess who loses? No, not Germany. Renewables and efficiency.