German renewable energy association AEE has produced a simple chart comparing average household expenses for electricity, motor fuel, and heating oil. While everyone is focused on the rising cost of power, it turns out that the other two items have increased faster since 2000. Craig Morris investigates.

One of the biggest problems with Germany’s energy transition is that it is mainly an electricity transition – far too little is being done in heat and the transport sector. Not surprisingly, the rising cost of retail electricity in Germany has drawn a lot of attention.

All along, the German media have pointed out that prices for oil and natural gas have recently been rising faster than the price of retail electricity. Now, a new chart by the AEE sums up the matter quite well. 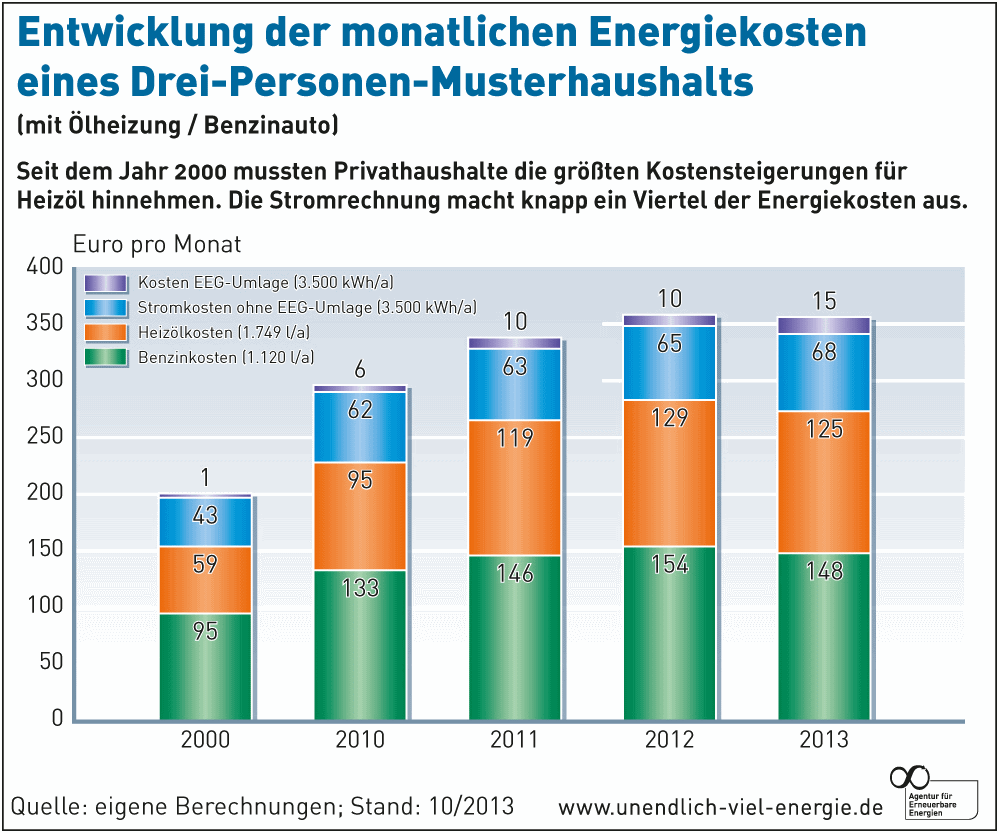 Here, we see the average cost of gasoline (green area) per month for a three-person household in Germany. On top of that comes heating oil costs (orange), followed by electricity costs without (blue area) the renewables surcharge (the purple area) on top.

Two things are salient. First, monthly expenses for heating oil have more than doubled since 2000, rising from 59 to 125 euros a month, and the monthly power bill has also nearly doubled from €44-€83 per month. In contrast, the cost of gasoline has “only” risen by around 50 percent, from €95-€148 per month.

Second, the main increases for everything took place from 2000 to 2011 – everything, that is, except the renewables surcharge. Power bills have risen from €73-€83 a month in the past two years; in contrast, monthly expenses for heating oil and gasoline actually dropped from 2012 to 2013.

There is thus some reason for concern, but clearly the rising cost of electricity has not been a major problem compared to the heating oil and gasoline. Also, it’s worth bearing in mind that power is still by far the smallest of these three components; German households still spend roughly twice as much on gasoline as they do on power – and roughly 50 percent more on heating oil than electricity.

Finally, I have been saying for some time now that it does not matter what percentage of the retail rate the renewables surcharge makes up. It currently stands at around 25 percent, but even if it rises to 50 percent who will care as long as retail rates remain stable?

And indeed, there are the first signs of such developments. This month, Germany’s fifth largest utility announced it will reduce (!) its retail rates, and other utilities say they at least do not expect to raise theirs. Austria’s largest utility (Germany and Austria are on the same wholesale power market) led the way by reducing its prices by 10 percent this year.

The general consensus in Germany is that the biggest cost hikes in the power sector are behind us now, as I recently explained in this blog. Going forward, Germany will continue to have some of the highest retail power rates in Europe, but other countries will increasingly catch up with the Germans, who can look forward to relatively stable prices. And because they conserve power, they consume less, so their power bills are already in line with everyone else’s despite higher prices.