A new study by German think tank Agora Energiewende looks into what solar power with storage would need to cost to be competitive with other optimized growth scenarios. Craig Morris says the findings need to be heeded.

Does it make more sense to install wind and solar capacity where it is most efficient or put them close to where demand is highest? (Photo by bby_, CC BY-NC 2.0)

In March, Agora Energiewende published a report investigating the various growth scenarios to determine how Germany’s energy transition could be made more affordable. The main comparison was between a resource-driven scenario and a consumption-driven scenario – in other words, should wind turbines and solar arrays be built in concentrated clusters with the best wind and solar potential, or should they be installed as distributed systems close to where power is consumed?

In a nutshell, the study found that the much touted concentration on the best resources leads to greater demand for grid upgrades and power storage (or power losses if not stored). In other words, the overall power supply costs are competitive if wind turbines and solar arrays are installed across the country close to consumption points. 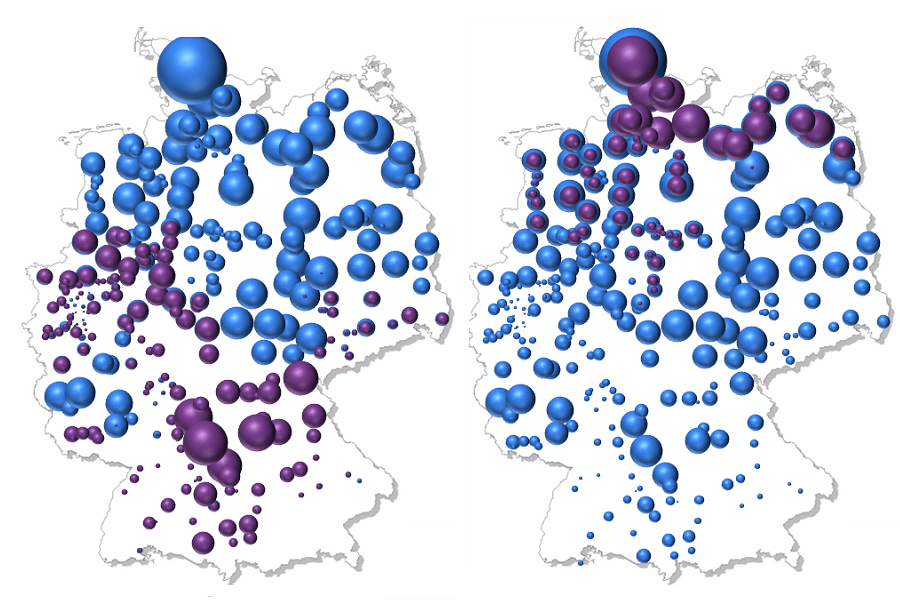 In Agora’s two optimized scenarios, the blue circles represent current installed capacity; the purple, what would need to be added. In the consumption-driven scenario, more is installed across the entire country, whereas the resource-driven scenario has most new installations going up in the north alongside most of the existing ones. (Photo: Agora Energiewende)

The new study (press release in German) investigates the main storage trend in Germany now: PV arrays with batteries. The findings support something I wrote in April: Germany is going down the wrong path with the focus on storing solar power. Specifically, Agora investigated a scenario in which 150 GW of photovoltaics is installed along with 40 GW of battery output (the storage capacity is apparently 120 gigawatt-hours) and found that the cost of such a combined system would have to drop by 80 percent over the next two decades for this alternative to be cost-competitive with the other two optimized scenarios (resource-driven and consumption-driven).

At first glance, the proposal of 150 GW of installed PV may seem outlandish. Germany currently has more than 33 installed, and it plans to discontinue feed-in tariffs for solar when the target of 52 is reached. But at that point, solar will not come to a screeching halt; already, feed-in tariffs for new systems come in at only two thirds of the retail rate, so solar will continue to be built as long as grid access – and priority on the grid – is granted.

Yet, the country only has peak power demand on summer afternoons between 60 and 70 GW. We already know that solar power production peaks on sunny days at roughly 70 percent of installed capacity, so 52 GW of installed PV would regularly provide around 35 GW of power. Likewise, 100 GW of PV would provide 70 GW of power; 150 GW of PV, around 105 of solar power – hence the need to store 40 of that, as assumed in the study.

Even more ambitious proposals are already on the table, such as 200 GW. But Agora’s study suggests that, while technically feasible, the entire approach is “highly unlikely” to become cost-competitive over the next 20 years. The price of a PV array with battery storage would have to drop by 80 percent.

My conclusion remains the same as in 2010: we need to focus on “peak demand parity” – when production a particular source of energy (such as solar) meets the power demand (for solar, on summer afternoons) and further growth requires storage. In the case of Germany, with higher power demand in the winter than in the summer, we therefore need to ramp up wind power faster than solar because the latter eventually requires seasonal storage.