A recent scientific paper wondered whether the potential of wind power worldwide has not been overestimated. Craig Morris could not help noticing that the calculation was based on something he has never seen it used in the German debate: watts per square meter.

Watts per m² – Germans are not worried about theoretical limitations. They just build renewables and realize in the process that they can make more energy than they need. (Photo by Alexander Franke)

Published in March, the paper states that the energy density of wind farms larger than 100 square kilometers is probably around a single watt per square meter partly because of the wake effect (a wind turbine takes some of the energy out of the wind for turbines directly behind it).

In essence, the discussion is nothing new. The Danes and Germans have been working on the wake effect since the 1990s in designing large wind farms, especially in terms of the spacing between individual towers and their arrangement.

Yet, Germans do not seem concerned about any theoretical limits. On the contrary, German Environmental Minister Peter Altmaier has frequently complained about the numerous German states that want to become 100 percent or more renewable, which has prompted him to ask which of the other German states plan to buy all of that green power.

One recent example comes from a presentation held recently by SMA’s CEO Pierre-Pascal Urbon, who pointed out that Germany is currently only using 20 percent of its suitable commercial and industrial roof space for photovoltaics – and only five percent of its suitable residential roof space. Nonetheless, Germany has 1.4 million solar arrays already installed (including ground-mounted) – in a population of 80 million with approximately 22 million households. 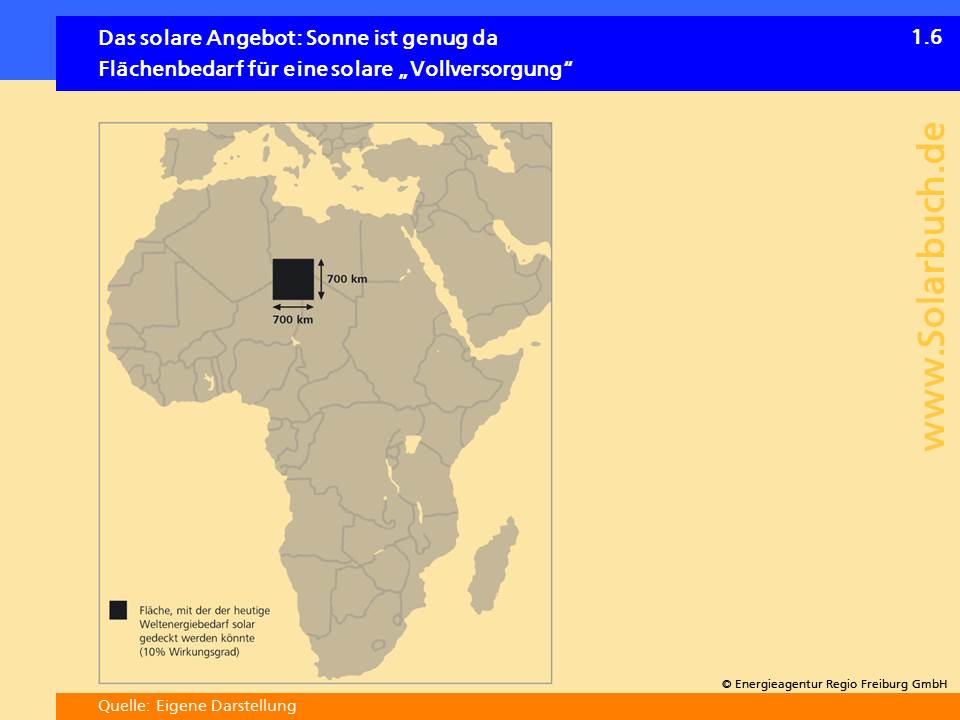 A popular chart from the 1990s in Germany showing that the size of a solar array in the Sahara that would theoretically produce the equivalent amount of energy (not just electricity!) that the world consumes. Source: Das Solarbuch.

And then there is das Solarbuch, one of the best known books on renewables in German. It contains a slew of graphics, such as the one showing a box in the Sahara indicating the area that would need to be covered with solar panels to meet the world’s energy needs – not just electricity.

Another graphic made the rounds way back in the 1990s. It shows a little box on the bottom right representing global energy consumption (not just electricity) in 1995. Then, there are boxes on the left for (from top to bottom) the potential of hydropower, biomass, ocean energy, and wind power – all of which is set inside a large box representing the amount of sunlight that hits the earth each day. 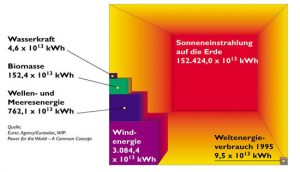 This widely circulated chart from the 1990s shows that Germans have always emphasized that the potential of renewable energy is much greater than our current energy consumption. Source: Ralf Bischof, Bundesverband Windenergie (BWE)

Each of these comparisons is silly in its own way. For instance, Urbon was not able to tell me what is meant by “suitable” (just south-facing roofs, or also southern façades and roofs facing the east and west?). The map of Africa seems to suggest that we should focus on large solar farms in the desert, not small solar roofs where we live (Germany is doing the latter). And the boxes represent the energy available, not anything that could be feasibly harvested (70 percent of the Earth is covered with water anyway, and you can’t cover your cities and farmland with infrastructure, solar, wind turbines, and biomass crops simultaneously).

But that’s not my point. I’m just trying to show how different the discussion is. While the Anglo world continues to wonder whether a switch to renewables is even possible theoretically, Germans are just switching – and we will find out what needs to be done in reality as we go.