How are Germany’s Eastern neighbors Poland and the Czech Republic reacting to the German renewable energy surge? Craig Morris discusses a recent study by the German Institute of Applied Ecology (Oeko-Institute) on the country’s energy transition and its impact on power flows with its neighbors.

Poland – a net importer of electricity from Germany that is mainly powered by coal, with renewables still far away. (Photo by CEE Bankwatch Network, CC BY-NC-SA 2.0)

The study takes a close look at physical flows – again, as opposed to commercial trading – with Switzerland, Poland, and the Czech Republic. While physical flows have remained relatively stable vis-à-vis Switzerland since 2003, there was a noticeable reduction in imports from Switzerland in 2012 (for the first three quarters for which data were available). 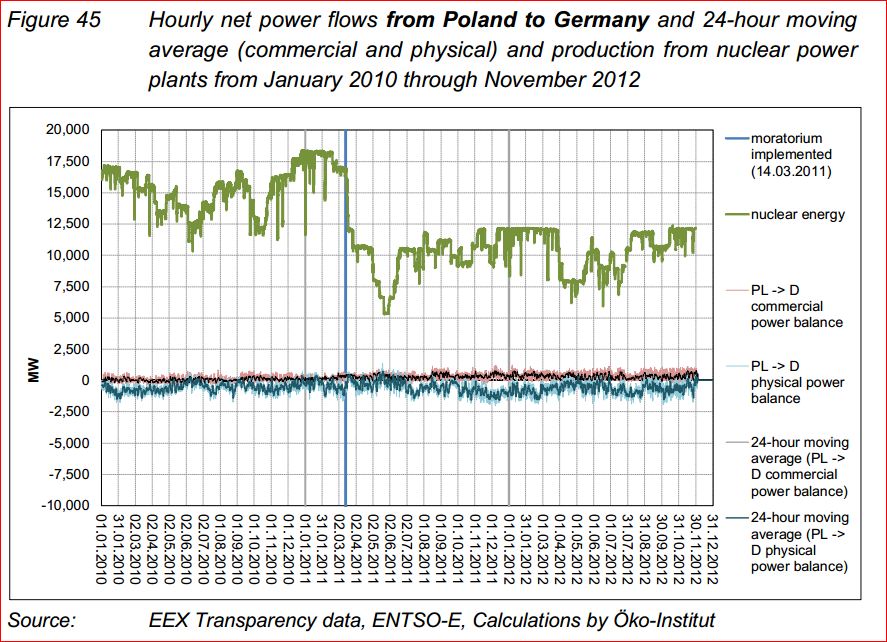 The power flows between Germany and Poland. Source: Öko-Institut

In contrast, the main shift in physical flows vis-à-vis Poland and the Czech Republic occurred in 2007. Germany is a net importer of electricity from the Czechs and a net exporter to Poland, but the balance of trading with both countries shifted by several terawatt-hours between 2003-2006 and from 2007 to the present. Both of these trends indicate that Germany is physically exporting more power to these three countries. But interestingly, the nuclear phaseout in March 2011 does not seem to have had a major impact.
The study finds that Germany not only ships some power from northern to southern Germany via Poland and the Czech Republic, but also sends some power sold to Austria through the two countries. In return, there is a “circular flow” with power also moving through Poland and the Czech Republic through Austria and back to Germany. Specifically, “The power which flows physically from Germany to Poland, without having been traded in this direction, flows on balance from Poland on to the Czech Republic.” But then strangely, “more power is traded commercially from the Czech Republic to Germany than flows physically.” It turns out that the power is being passed on to Austria as a sale from Germany.

Poland and the Czech Republic charge that surges in renewable power are becoming uncontrollable, but the researchers could not confirm these findings. On page 76, they note that loop flows with Poland exceeding 2.5 gigawatts only occurred in 2011, when wind power production was between four and eight gigawatts. And “significant loop flows of up to 2,000 megawatts” occurred when wind power production was “virtually negligible.”

So what is the problem? The researchers found that prices are high when production is also great. The way the market is designed, power might then be imported from neighboring countries (such as Denmark) if import prices are lower. This power then hits a congested part of the grid and is rerouted along a path of lower resistance. This outcome is not infrequent but also not directly related to surges in wind or solar power production as charged.

Once again, price – not technical capacity – is the culprit. A number of Eastern European countries had even proposed that Germany and Austria, which currently share a power trading platform, be split – a demand that the researchers take as a clear indication that the market’s design, not surges in renewable power, is causing loop flows.

In the next and last installment, we take a look at nuclear power imports to Germany and draw some overall conclusions.