In September 2019, during the United Nations Climate Action Summit in New York, the Greek Prime Minister Kyriakos Mitsotakis pledged to phase out all coal-powered electricity production by 2028, making Greece a pioneer in the Balkans. This commitment is enshrined in the National Energy and Climate Plan (NECP) submitted by the Greek government to the European Commission end of 2019. The new government, in power since July 2019, revised the NECP and introduced more ambitious climate and energy targets (see blogpost on NECP). Daniel Argyropoulos has the details.

Development of the power generation mix up to 2030 according to the NECP: 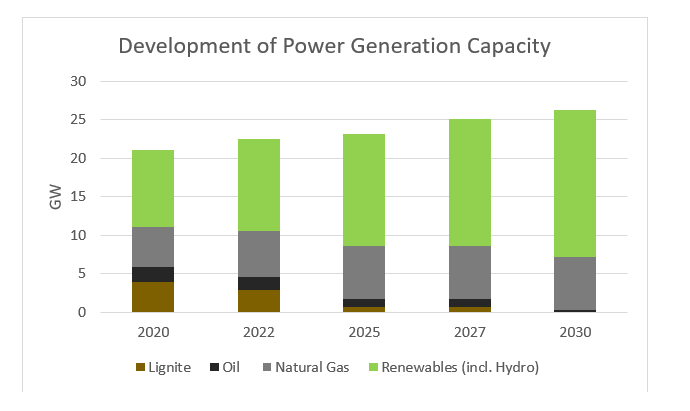 According to the existing plans, all but one lignite-fired power plants shall be shut down by 2023. The last remaining power plant, Ptolemaida V, is scheduled to stop generating power from lignite in 2028, only 6 years after its completion.

Although the importance of lignite has been declining since years, the abrupt phase out is remarkable. Lignite – a domestic and cheap to exploit resource – was a pillar of the country’s energy system for decades and, in 2015, 50% of electricity in Greece was still produced from lignite [HAEE: Greek Energy market report 2019]. The rapid phase out of all power generation from coal means that about 4 Gigawatt (GW) of coal generation capacity, or almost one quarter of the Greek generation fleet, will be retired by 2028. Phase out started without delay: the first power plants, Amyndeo I+II and Kardia I+II, were already shut down between end of 2019 and mid-2020.

The timeline for each power plant is follows.

Shutting down lignite fired power plants no doubt is  an effective measure to significantly reduce the country’s emissions, however the main driver for the phase out is the economic situation: With an increasing carbon price under the EU ETS, not only old and inefficient but all lignite fired power plants are losing many millions of Euros every year and are becoming a big burden for the state-owned power utility PPC and, eventually, taxpayers in Greece. Attempts to privatise lignite power plants were unsuccessful, As the cost of power generation from natural gas and renewables is substantially lower, market economics have already led to a decreasing share of lignite for power generation and to a strong uptake of natural gas and renewables since 2015.

The impact of this radical shift in energy policy will be felt particularly in the coal regions of Kozani, Florina (Western Macedonia) and Megalopoli (Peloponnese) where around 6000 people are employed by coal mines and in the lignite-fired power plants. In order to address the economic and social repercussions of the shut-down, the government presented a master plan for a just transition in the lignite regions which will be in public consultation in September 2020. The master plan contains a series of measures which aim at supporting those regions that are currently highly dependent on the coal industry to develop new industries based on clean energies.

Is the pandemic ending the lignite era even faster?

The trend of a decreasing role of lignite in the electricity mix has accelerated since the country took measures to stop the spreading of Covid-19 in Greece. Whereas the demand for energy, due to the reduced economic activity during the month-long lock-down, fell by 12% in the first half of 2020 (in the interconnected system, i.e. excluding non-interconnected islands), electricity generation from lignite decreased by 57%. In contrast, generation from natural gas fell by only 2% and the renewables generation grew by 25% (HEnEx). In June 2020, generation from lignite fell by 74% compared to June of 2019, representing less than 6% of total electricity generation.

As a result, CO2 emissions of PPC – the operator of lignite plants – dropped by more than 70% in the first half of 2020.

What is the outlook?

Although it can be expected that energy consumption will rise again it is unlikely that generation from lignite will rise again to anywhere near pre-pandemic levels. The end of the lignite era in Greece was politically decided because of its unsustainable market economics. Given this rapid transition it will be interesting to see how the energy system will evolve and how market players will adapt to rapidly changing market conditions. Natural gas will play an important role, with the Trans Adriatic Pipeline (TAP) scheduled to start commercial operation towards end of 2020. In the light of Greece’s aggressive expansion targets for renewables and considering the vast potential for wind and solar energy, Prime Minister Mitsotakis’ words at the UN Climate Action Summit could become reality: The coal phase out is not only a deep cut for the energy sector but also presents a huge opportunity for Greece to embark on a clean energy future.