Over the last two centuries, energy trade has become increasingly global. Where wood was found and used locally, coal was mined and transported nationally, and oil emerged as a global commodity. Natural gas is also moving from regional markets to the global shipping of LNG. The same holds for energy demand, which is growing and shifting Southward, away from traditional OECD markets, to China, India, South-East Asia and Africa, as the International Energy Agency (IEA) confirms in its findings. Renewable energy harbors a number of characteristics that could potentially end this trend of increasingly global energy trade. Just Voskuyl and Daniel Scholten take a critical look at the bigger picture.

Renewable Energy and the Changing Geography of Energy Trade

Energy trade flows are always in motion. New sources shape where reserves are located, and energy is produced. Population growth, economic development and climate conditions shape the size, nature and location of energy demand. New technologies, finally, open up ways to generate, store, and transport energy sources and carriers. The characteristics of renewables highlight profound changes in volume, location, and nature of trade in energy sources, carriers, and generation technologies that have gone under the radar in discussions on the geopolitical implications of renewable energy (see IRENA’s two reports A New World and Global Energy Transformation for further reading). When it comes to energy globalization, we believe three major impacts stand out.

In terms of trade volumes, the biggest change is that renewable energy significantly reduces the volume of energy sources shipped across the globe. Despite current context of the coronavirus crisis and steep oil price drop, crude oil and natural gas are some of the top commodities traded globally, but solar and wind are free goods that are essentially available everywhere. That remains true even if they are intermittent and more efficiently harvested at certain locations than others. They need not be traded, but can be harvested closer to demand, whether central by companies or decentral by local actors. The same goes for geothermal energy, produced in the form of heat and best used close to the source or transferred into electricity. Biomass and nuclear material volumes could increase, of course, but will not offset the effect of wind and solar, especially if electric vehicles and local heat sources take off. In the end, renewables make countries prosumers, lessening the need for energy source imports, the remainder of which can be met by fossil fuels or energy carriers.

Regarding location, renewable energy implies a regionalization of trade. Electricity is the primary carrier for most renewables and faces long-distance losses in transportation. Because of renewables’ abundance and electric nature, cross-border energy flows can be expected to shift from global trade in energy sources to regional trade in energy carriers. This greatly affects the position of OPEC and the strategic importance of existing trade routes from and to these countries, for example in the Indian Ocean. Regionalization is further enhanced by the intermittent nature of renewable energy as flexibility becomes an increasing concern. Flexibility requires short-term, intraday markets, rather than long-term, bilateral deals. This likely increases cooperation with neighboring countries to balance grids. Interesting but yet unclear is the role of hydrogen in this regard. It represents a more long-distance carrier but can be produced domestically. Cost-advantages, limitations to domestic production capacity, strategic considerations to diversify distribution vectors, and limitations to an all-electric society will determine how much hydrogen we will use and what amount will come from overseas.

Concerning the nature of trade, renewable energy generation technologies are more modular/scalable than their fossil counterparts. Instead of shipping the components to build a single coal-fired power plant for a company, we would be trading many solar panels to a variety of actors to produce the same kWhs. Interesting in this regard is whether capital, know-how, and economies of scale dominate production of these technologies, or local manufacturing stands a chance. If the former, trade remains global. If the latter, trade becomes more local. In addition, critical materials used in clean energy technologies, such as copper, cobalt, lithium, as well as rare earths like neo dysprosium and neodymium, represent new trade flows. While this changes the geography of trade from current material suppliers to countries possessing these materials, e.g. China, Brazil, Chile, and Congo, in terms of globalization these flows are likely to remain global and substantial if compared to current material flows. 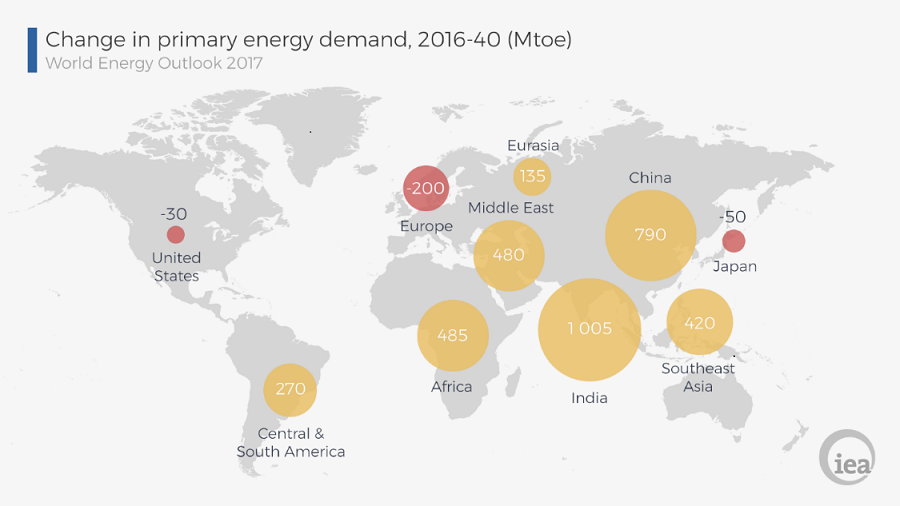 Renewables and Trade Flows – A Challenge for Global Geoeconomics?

The transition to renewable energy is expected to greatly lessen global trade in energy sources and regionalize trade as emphasis shifts to energy carriers and short-term flexibility. At the same time, generation technology trade changes in nature, while new critical material flows emerge. This could create a paradoxical situation wherein global energy demand is growing, but global energy-related trade volumes are dropping. Pivotal in this regard seems to be the moment the uptake of renewable energy starts to outpace demand growth in the Indian Ocean. This issue of ‘stranded trade’, especially in terms of volume, warrants a closer look. Most accounts on the geopolitical implications of renewable energy have been under the implicit assumption that while trade patterns shift and markets change, there will be the same amount of energy-related trade.

Dr. Daniel Scholten is Assistant Professor at Delft University of Technology, Faculty of Technology, Policy and Management. He also is a non-resident fellow at the Payne Institute, Colorado School of Mines and guest lecturer at the geopolitics of energy course, University of Stavanger. In 2018, he served on the expert panel of the IRENA Global Commission on the Geopolitics of Energy Transformation. Email: d.j.scholten@tudelft.nl