Determined to push government’s inaction on the climate crisis, activists from Fridays For Future, Ende Gelände, Extinction Rebellion and others poured into western Germany’s brown coal district to use their bodies to shut down Europe’s worst climate killing infrastructure. L. Michael Buchsbaum reports

40,000 plus attend Fridays for Future in Aachen

By noon the square around Aachen’s main train station was full of protestors drawn to the first international Fridays for Future (FFF) demonstration. Hailing from at least 15 nations, between 40,000 and 60,000 people descended upon the ancient city to demand a livable future. Waving colorful, often witty signs, students, parents, teachers and concerned citizens of all ages followed a serpentine route past the famous Aachen cathedral, through open squares filled with diners and onlookers, and over the hill to the Tivoli Arena where, following last minute negotiations with the initially hostile city government, a stage outside had been erected for speeches and music. 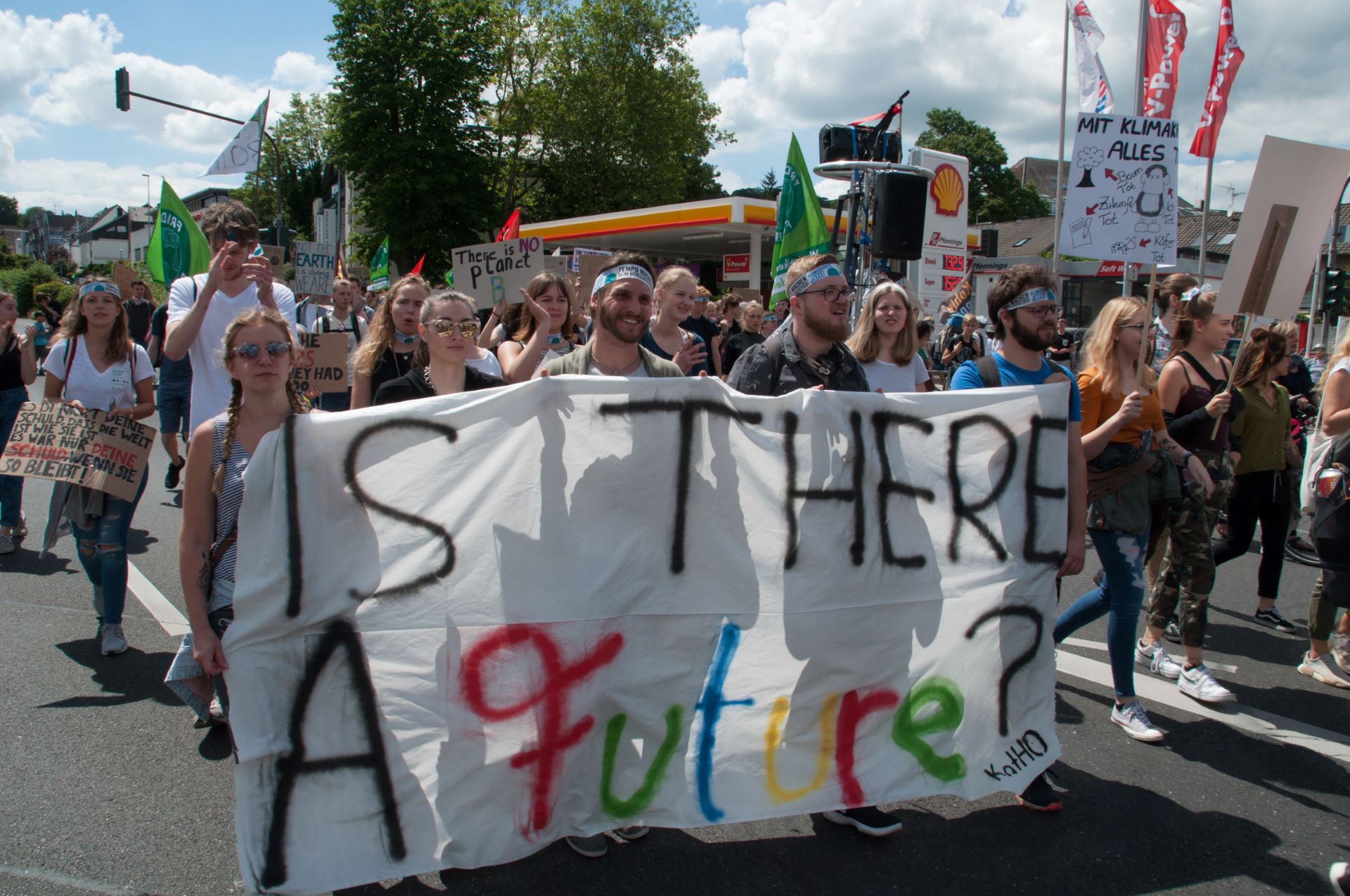 Luisa Neubauer, a leading student voice in Germany, addressed the global audience, pointing out that since the 2015 Paris Agreement, “Nothing has really happened on the ground. Emissions are rising unabated…We have a policy that talks more about the climate but still does not act.” A stream of other international climate activist leaders, artists and musicians followed, adding their voices to demand immediate policy changes from the EU and various national governments, including a swifter coal exit, much more investment in clean energy—and above all less talk and more action.

Ende Gelände draws a line in the sand

Though Aachen and North Rhine-Westphalia’s governments eventually agreed to support the giant FFF demonstration, they barely accepted the nearly 10,000 Ende Gelände (EG) activists who were simultaneously gathering in nearby Viersen, just north of the lifeless moonscape of RWE Energy’s vast and expanding Garzweiler lignite mine. 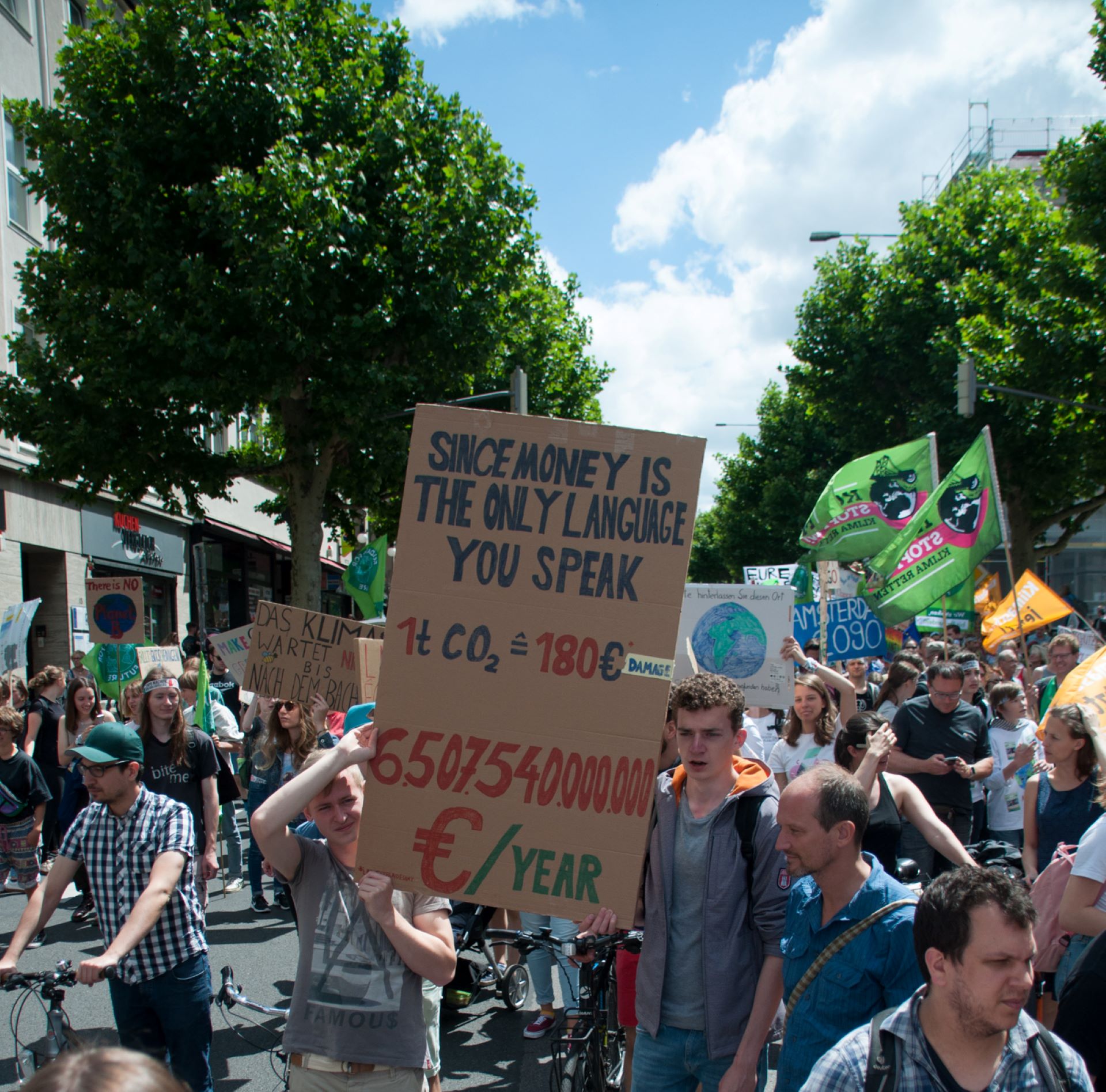 What is the price of inaction? (Photo courtesy Buchsbaum Media)

Dressed in their signature white hazmat suits, and armed with powerful slogans, fierce drumming and fiercer determination, in tactical shift, Ende Gelände focused away from the embattled Hambacher Forest to demonstrate their solidarity with others against the Garzweiler pit.

Simultaneous to the FFF demo, by the end of Friday, Extinction Rebellion and other EG activists had already quick-marched almost 15 km under constant police pressure to begin what would become a weekend long occupation and shutdown of a key junction along RWE’s private coal railroad, thus preventing shipments of lignite to two of the most noxious power plants in Europe.

With occupations underway, as the sun went down on the longest day of the year, the EG camp in nearby Viersen continued to swell with FFF and other activists gathered to train for the weekend’s main events.

Shutting down the infrastructure

Early Saturday morning, displaying near-martial order, several “fingers” comprised of thousands of EG activists assembled and left the camp to join a sanctioned march around the perimeter of the Garzweiler, ending in the legally doomed city of Keyenberg, a planned victim of the growing pit. 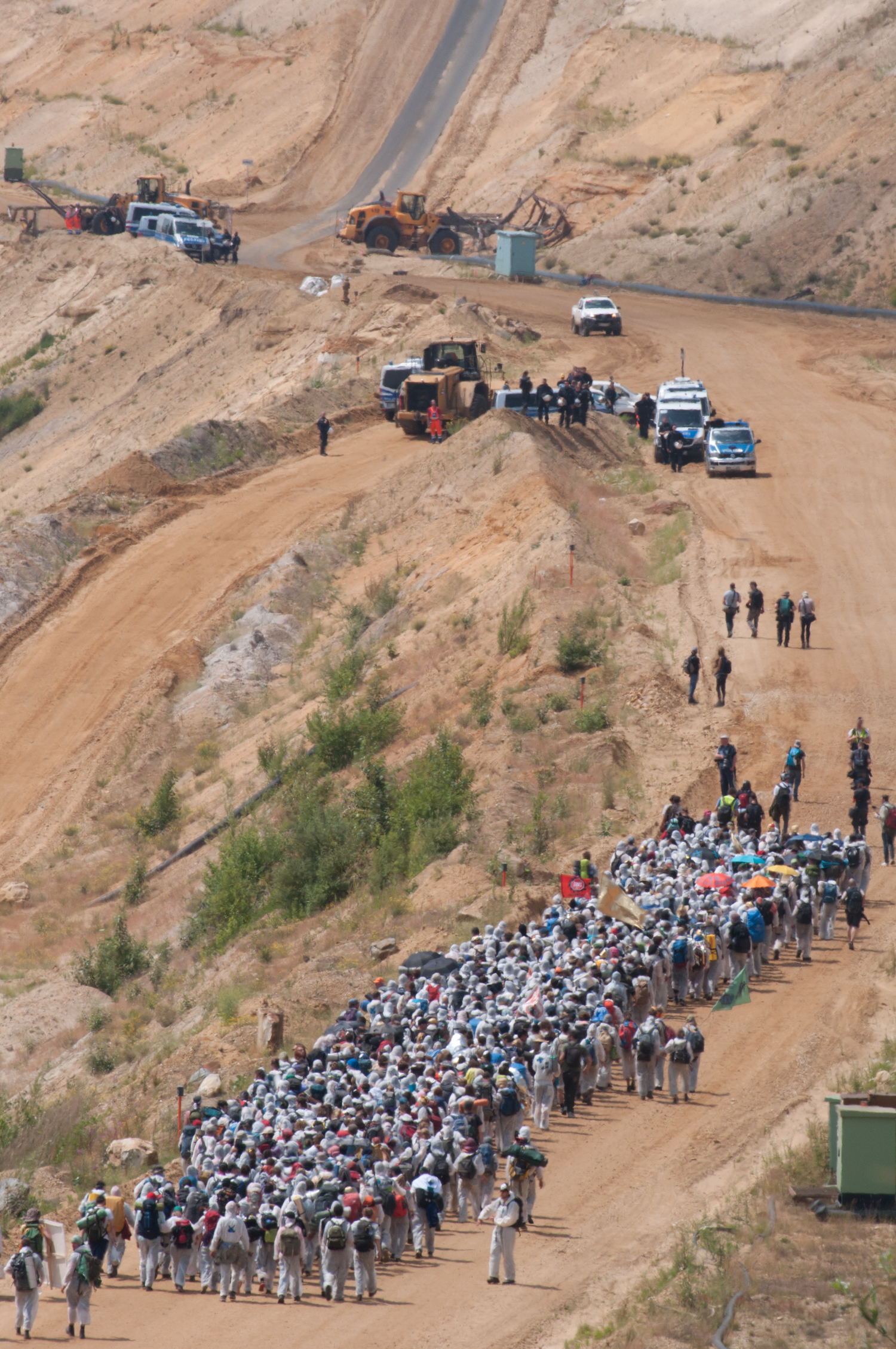 After several police-created delays, they were finally allowed to join the mixed group of nearly 20,000 waiting for them along the previously agreed route. As the “gold” Ende Gelände column passed under the Autobahn at the north edge of the mine, massed police greeted them with water cannons and batons at the ready. But little deterred the EG protestors who suddenly broke ranks, raced through police lines, dodged their blows, and scrambled down the steep earthen walls deep into the Garzweiler pit below. Once there, they reassembled into a 1,500 plus super-finger, marching in formation, singing and chanting as they went further into the belly of the beast.

While police forces, aided by tanks, helicopters and teams of angry RWE workers cordoned them off and prevented other activists from climbing to the top of the mammoth excavators themselves, the protestors started to paint, dance and laugh—as the whole of the mine’s machinery became still and, for one day at least, no more coal was ripped out of the tired ground.

Around the edge of the mine, thousands of spectators cheered on Ende Gelände’s progress. Emboldened by their success, not a few others started trickling in–drawing even more police and helicopter attention.

Words from the activists themselves

Central to the weekend, however, was the determination of the activists, who unlike their police and RWE opponents, weren’t motivated by legal or financial arguments, but by a different sense of moral duties and obligations. While corporate media seemed awed by the spectacle, rarely did they ask what drove thousands to travel hundreds of kilometers, march long distances under the broiling sun (carrying sleeping bags, musical instruments, food, water and other necessities), prepared to risk injury, arrest, jail, fines and more. 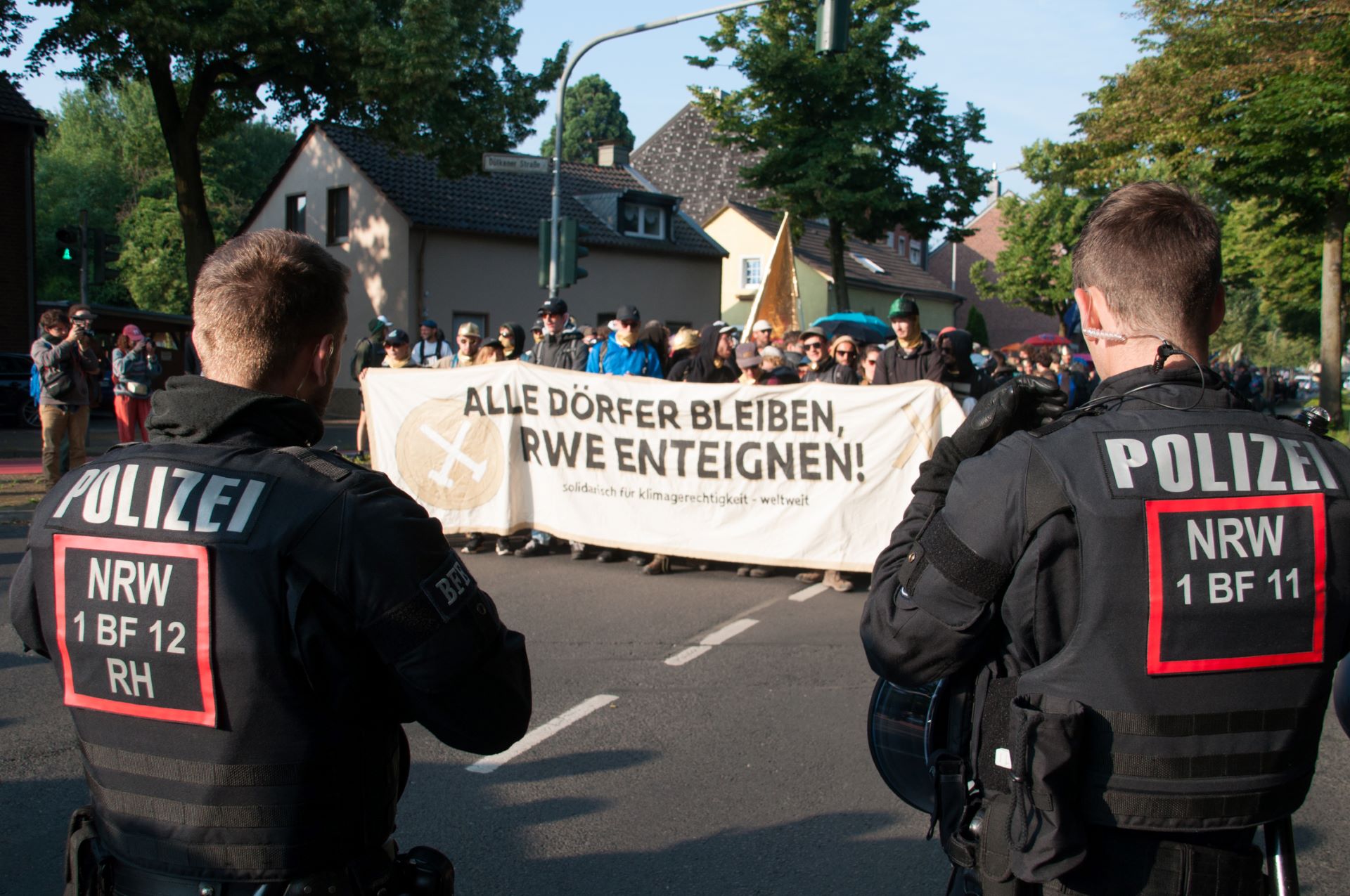 “I wanted to go further,” said one 50-year old activist who participated in the blockade, “not just support other groups, but to participate. As Greta says, ‘Our house is on fire.’ As I think about my daughter—I simply can’t let our house burn down without acting! I worry that without action, when she is as old as I am today, her world will be full of deadly heat, droughts, and the worst aspects of climate change.”

By participating, a twenty-something year old activist explained, “we were able to say with our bodies, that [business as usual] can’t go on. We have less than 10 years to act. The fact that the German government plans a coal exit only by 2038 shows that the danger of the climate crisis is not being taken seriously. It also shows that previous forms of protest did not have the necessary punch,” she continued.

“I wanted to push climate policy further,” a Dutch activist said. “And in the immediate, by slowing down the power plant, we were able to reduce pollution, at least on that day–waiting for a total phase out in 20 years is unrealistic. We are on the right side of history, that much is clear,” he said.