On July 12, a group of economists called on the German government to take quick climate action. This new proposal packs because the messenger officially advises the government – and doesn’t come from the climate camp. Craig Morris reports

The German Council of Economic Experts says (in German) that Germany doesn’t have time to wait until the EU’s emissions trading scheme (ETS), which only covers 45% of emissions, is expanded to cover everything even if that expansion were officially planned (it isn’t). A national carbon tax, the Council says, should be implemented soon.

Critics of national proposals often charge that German emission reductions amount is too little if other countries don’t pull their weight: Germany shouldn’t “go it alone.” But Germany needs to meet its own targets if it wants reciprocity, the new report argues, and a carbon tax may be the only way to do that. 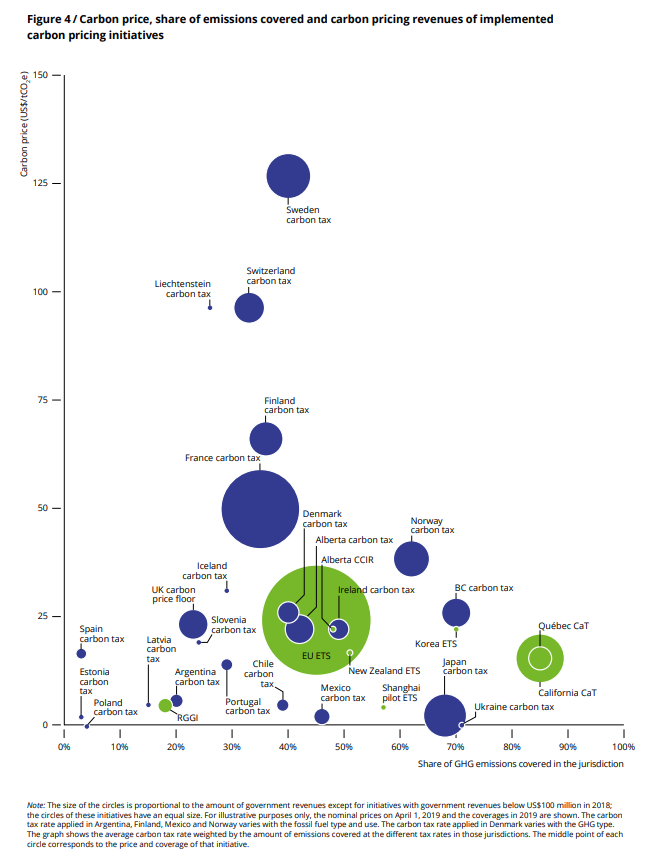 The argument that “German shouldn’t go it alone” weakens with every passing year. In this international overview of national carbon prices from June, Germany doesn’t even appear. Source: World Bank (PDF)

The Council doesn’t propose a specific price, but rather shows the impact (see the second chart here) of a sliding price. And then they give the example of 35 euros per ton – which can probably be understood as their lowest bid. It would be some 50% above recent ETS prices.

To protect German industry, a border tax could be implemented; basically, the carbon tax would be charged whenever a product from outside this carbon tax zone enters Germany. Products from countries with similar or higher carbon taxes (such as France, the UK, Sweden and Switzerland) would not be charged. Indeed, the list itself shows that Germany is already a bit of a straggler. The hope is that such border taxes will encourage countries already considering such floor taxes, like China, to go ahead and adopt one – no trade war!

To protect the poor, the revenue would be paid straight back to people equally per capita. In general, low-income households pay a large share of their expenses on energy but spend less overall – so they would ideally get more back than the tax costs them. The tax would thus redistribute wealth from rich to poor. Germans are especially sensitive to this issue after the Yellow Jacket protests in France against a climate policy that would have detrimentally impacted rural areas and small towns already feeling left behind (City slickers in Paris can more easily do without a car).

So the poor would not be hurt by this carbon tax?

In general, no – in specific cases, yes. A poor person in an area without good public transport may have an old car and a long commute. Such people don’t have the money to switch to an electro vehicle (EV). Likewise, tenants are trapped. Mieterbund, an advocacy group representing tenants, points out (in German) that tenants can’t pick their type of heating system – and landlords don’t have to pay higher prices from a carbon tax, so the incentive doesn’t lead to better insulation, etc. And those living in new, well insulated apartments wouldn’t fell much of a burden, while those scraping by on low rent in a poorly insulated home will feel a bigger impact – possibly one outstripping the money they get back.

The experts say that special funding might be needed for such cases. Since most Germans rent, that’s potentially most people; driving is not the biggest problem, just the one everyone talks about first because our societies are car-crazy.

Will the German public accept a carbon tax?

Not if the press doesn’t support it. An interview on the subject in Der Spiegel (in German) included a poll in which some two thirds of readers supported the statement that the proposal “blackmails car drivers” (the other option was “a real incentive for a mobility transition”). Having said that, Spiegel readers may be among the least informed about climate issues. The weekly – known within Germany as a tabloid for intellectuals – was long the only main one to give a voice to climate deniers and has traditionally written very biased takes against the Energiewende.

Importantly, as one of the interviewees explains, the floor price for carbon would not affect car drivers alone, but also anyone using fossil fuel for heat at home. And of course, the phrasing of the question itself is leading; no serious pollsters would formulate an option as “blackmailing drivers.” No serious journalist should either. The question is not whether people want to pay more for gas; who wants that? The real question for grown-ups is whether we want to do something now or have future generations pay dearly for climate change later.

Does the proposal have legs?

Maybe. When Germany’s Environmental Minister Svenja Schulze called for a carbon tax earlier this year, she seemed a bit alone – no longer. The Council’s proposal adds weight from a rather middle-of-the-road, pro-business group. But it is based on analyses from the Mercator Research Institute on Global Commons and Climate Change and the Potsdam Institute for Climate Impact Research (PIK). It thus contains the best ideas from the climate community (including a price of at least 30 euros) and is packaged as coming from a group mainly concerned about business.

In short, the proposal rocks. And because it’s so awesome, the special support mechanisms still needed for renters and car commuters show really well that a carbon price is not a silver bullet.