Awash in sunshine and gentle breezes, over the spring Easter holiday, renewable energy production throughout Germany began to climb, hitting a record on Easter Monday as roughly 77% of electricity was generated by renewables. Is this a further sign that coal is on its way out? L. Michael Buchsbaum presents the facts.

Reports varied within Germany, but the message was clear: renewables took over German power generation last week. The Fraunhofer Institute for Solar Energy Systems (ISE)’s Energy Charts reported the 77% record-smashing feat. Other figures released by Agora Energiewende suggested that for several hours on Easter Monday, renewables were able to cover almost all the power needs throughout the country.

Calculations from energy provider E.ON were quite similar. From 11am through 4pm, up to 52 gigawatt-hours of renewable electricity was generated. The electricity load, however, was a maximum of 49.5 gigawatt hours, it said. “Thus, the entire electricity consumption in Germany in the peak hours could be covered by electricity from renewable energies,” said E.ON in a press release. Additonal data provided by the Federal Network Agency (BNetzA) on the SMARD online platform backed this conclusion.

Throughout the day, renewables made up the majority of electricity generation for several hours, but only the fossil fuel generators complained. As renewables surged, Germany’s “merit order” dictating that only the least expensive energy production is maintained, forced conventional power plant operators to rapidly and sharply reduce production.

By noon, as nuclear and lignite generation fell to just 3.8 and 4.7 gigawatts, respectively, hard-coal-fired generation plummeted to only 1.8 gigawatts. “The conventional power plants, especially the lignite-fired power plants, could have throttled [back] their production even more. Then the wholesale market prices would not have fallen so much,” said Dr. Bruno Burger of the Fraunhofer ISE in an exchange with PV Magazine, commenting on how suddenly inexpensive prices were trending across the system.

What’s more, according to initial projections, the high proportion of renewables ensured that German CO2 emissions fell to around one-third of their annual average. Between 11am and 4pm, the average energy mix emissions were between 160 and 170 grams per kilowatt hour.

All that clean energy was also present the next day, April 23, as onshore wind turbines delivered 26 gigawatts of power through 1 pm with PV systems generating another 27.5 gigawatts. Together with the other types of renewables, clean energy during this time produced almost 66.4 gigawatts. Though still a vast amount, because this was a working day, the nearly 80 gigawatts of energy demand was significantly higher.

But the Easter renewables surge was not an isolated incident. Germany has had large amounts of renewables in its electricity mix before: the previous record renewables shares were reached on 8 December 2018 (75 per cent) and 24 December 2017 (74 per cent).

Throughout March 2019, Germany also set other records as more than half of its electricity was regularly renewably generated. According to earlier figures published by Dr. Burger’s Energy Charts, renewables accounted for 54.45% of net electricity generation that month. 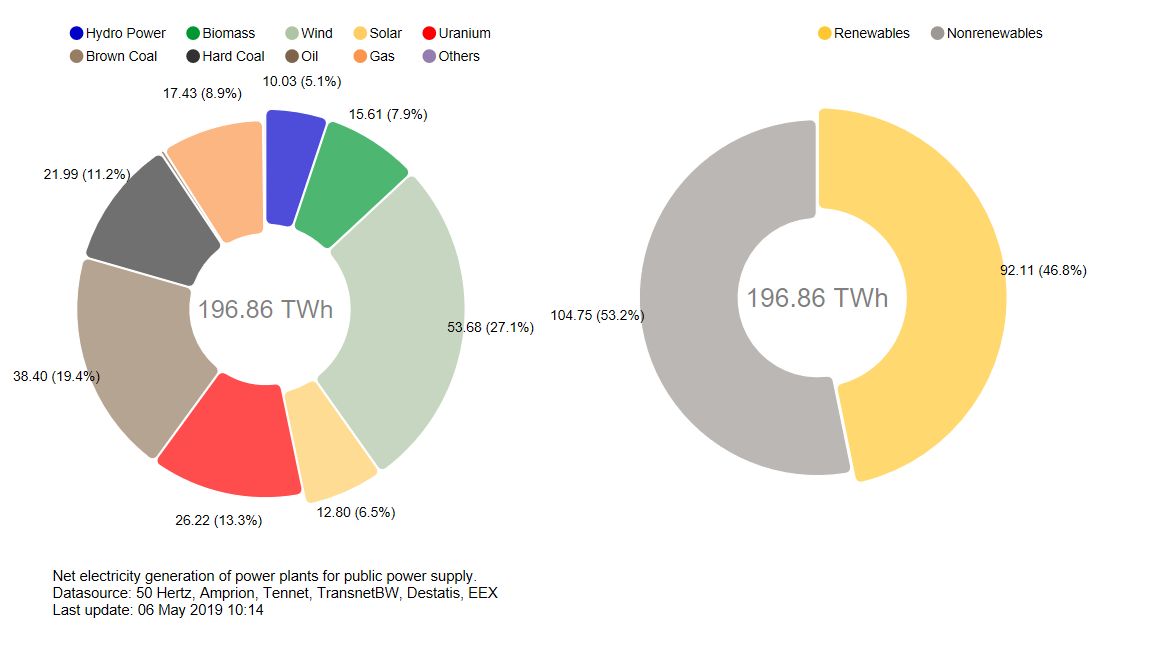 The previous record was set in May 2018 when renewables accounted for 48.6% of total net electricity generation. Much of the clean energy was attributable to wind power, accounting for some 34.2% of net electricty generation. And despite Germany’s usually cloudy weather, solar PV systems accounted for an average of 7.3% during this time, with a peak on March 30 of 17.9% of net generation.

The first quarter results become even more surprising when one factors in that the amount of newly installed wind power has rarely been this low. “Not since 2014 has the monthly increase in wind power been so small,” said Dr. Burger. The drop in new installations is a consequence of the new energy law that was passed at the end of last year. A similar slowdown could be seen in the solar sector later this year, he fears, while repeating a call for an annual 10 GW of newly installed PV capacity to be added.

Though Germany aims to cover fully 65 percent of its power demand by 2030 with renewables, figures from 2018 show renewables making up only 37.8 percent. Even as spikes like Easter Monday keep occurring, given the inherent intermittency of renewables, increased penetration coupled with battery storage will be necessary to achieve the nation’s clean energy goals.

As renewables increase, they are also squeezing out more expensive, polluting fossil fuels. This calculation no doubt played into the decision of leading German energy producer and Europe’s main polluter, RWE Energy, to cancel plans to construct or invest in any new coal fired plants going forward.

The company announced at the end of April that after a seven year effort, it is no longer seeking to construct the 1,200 MW BoAPlus lignite plant in Niederaussem located within the Rhineland’s brown coal region west of Cologne

Though still heavily reliant on a fleet of coal fired power plants in Europe, RWE vowed to “focus on electricity generation from renewable energy sources.” If the EU and other regulators approve, RWE will reorganize later this year while taking over 10,000 MW of renewable power assets from subsidiary Innogy and rival E.ON, transforming the “new” company into the world’s fifth largest renewables producer.

“In the future, RWE will focus on electricity generation from renewable energy sources. Consequently, the company will no longer invest in new coal-fired power stations,” it said in a statement on, what for the renewables sector, can only be seen as a second “good” Friday.