Czech nuclear reactors have so far produced at least 4000 tons of highly radioactive waste. If the number of reactors grows, so will the amount of waste produced. The government has long declared itself in favor of developing nuclear energy even as it still does not know how to solve the nuclear waste problem. Martin Sedlák takes a look.

Locals and municipalities vs. the state: 20 years of disputes

The Czech concept for nuclear waste abatement counts on building storage facilities for it underground. Until that capacity is built, “barrels” of spent nuclear waste remain at intermediate storage facilities on the sites of these power plants. The state has given the responsibility for finding an appropriate location for such storage underground to the Radioactive Waste Repositories Administration (RWRA).

At the very beginning of identifying such a storage site, six localities covering the territories of 32 different municipalities were preselected. Today the state is choosing from nine localities covering the territories of 52 municipalities. Instead of local administrations and the state reaching a consensus on this issue, the state bureaucrats have just exacerbated its various related problems. The localities that are meant to be subjected to further examination in order to potentially choose one for a storage facility are shown on the map below. 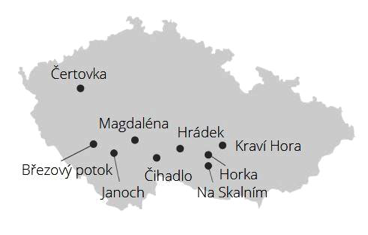 Ministerial bureaucrats, politicians, and other state authorities continue to repeat the same errors over and over in their communications with locals, namely, keeping important information secret while failing to keep their promise to arrange for a transparent storage site selection process. For example, since 2012 municipalities have been promised that a law would be adopted to regulate their involvement in the site selection process. No such bill has yet reached the legislature.

Together against the state

Currently 31 towns and villages and 14 associations are members of the Platform Against Storage Underground. The Platform was created in 2016, after 14 years of each municipality facing the pressure from the state authorities more or less on its own. The coalition’s aims are clear: To advocate for an open, transparent method of finding a solution to this problem.

The state’s failure vis-a-vis the municipalities was clearly described by Michael Forman, the Mayor of Horažďovice, when he said that “The mayors are disappointed by (…) the constant changing of the rules, and by the state authorities agreeing to obligations and then violating them.”

The RWRA is currently attempting to establish new survey sites in all nine of the localities identified, designations that will apply until the year 2025. Resistance to this from the municipalities represented in the Platform involves their demand that the RWRA waits until an open process is established, with opportunities for those opposed to the RWRA’s choice of localities to present their arguments before the RWRA attempts to choose the survey sites.

Without prior consultation with the municipalities, the RWRA reduced the number of pre-selected localities to four and submited its proposal to the government at the end of last year. The government, however, returned it back for completion. In January 2019, the RWRA announced that it would postpone its decision allegedly due to the need of further geo-physical testing in the area of the four localities. Given the lack of transparent criteria for the process, municipal representatives are concerned that the decision will be made behind closed doors and that an audit of the choice by independent experts whom the municipalities trust will never be facilitated. The municipalities affiliated under the platform lost their patience and appealed to the minister of industry and trade to remove the director of RWRA, which actually happened in the middle of February.

Petr Nohava, the Platform’s spokesperson, has commented on the state’s approach as follows: “Localities are not just names on a map – people live there. The state cannot ignore the voices of the residents of the municipalities affected. A storage facility is the kind of construction that will be there with them forever.”

At the end of 2018, legislators on the Senate’s Committee for the Environment, Land Development and Public Administration backed the municipalities’ demands, unanimously adopting a resolution stating that “the process of designating and evaluating the localities appropriate for further surveys for a possible future storage site does not include an effective, transparent dialogue with the affected municipalities” – which should be a basic prerequisite for finding an acceptable solution.

Martin Sedlák is program director of The Modern Energy Union (Svaz moderní energetiky), the Union contributes to national debates in Czech Republic. He is as well an author for the Blog Aktuálne.cz.