Marco te Brömmelstroet, Associate Professor in Urban Planning at University of Amsterdam and head of the Urban Cycling Institute, visited Berkeley with a delegation of grad students studying transportation systems. Known as “The Cycling Professor,” he sat down to talk about how the Netherlands became the bicycling capital of the world and how other communities can (or can’t) follow suit. Ben Paulos asks for details.

What’s so special about cycling in The Netherlands?

As a Dutchman you are not aware of cycling. It is like an American is not aware of cars.  It’s just something that is around and you use, and it’s nothing special. It’s like drinking water from a tap. Cycling is just ingrained in society.

On a very personal level, as an 8 year old in the Netherlands you are able to cycle to school in a safe way.  No parents need to bring you.  This has a tremendous effect on the feeling of autonomy of young children, which could explain why Dutch children are among the happiest in the world.  If you have to be transported in the back of the car to every activity you want to do, you are not getting a nice quality of life or sense of control.

On a societal level, cycling has a reciprocal relationship with egalitarianism.  Dutch society is quite flat.  Even the king or ministers know that it works in their favor to show they are normal.  On various targeted occasions they use the bicycle to show that. If they need some attention they ride their bicycles to work, in their suit, but they make sure there is a photograph.

You can also look at it the other way around – If you bike around the city every morning you see and acknowledge other people, and negotiate with all these people.  In that process you meet your social environment – famous people, tourists, poor people, all layers of society.

In an Uber, it’s safe, but it makes you isolated, in a bubble going through the city.

You can see it here on campus where students walk around chatting, meeting others with… how do you call that, serendipity?  You see someone you weren’t expecting.  You meet and greet and hug.  That happens a lot on the streets of Amsterdam. As a social scientist that’s what makes cycling very interesting, and a topic I will keep on researching.

What are you working on now?

For many years we had a lot of funding going into research on sustainable mobility, so all the universities were researching it. But none of them mentioned cycling whatsoever.

Suddenly this wave came where the Dutch became more aware of what was happening, and wanted better policy, so they were looking for research on it. There were no researchers interested in cycling, just this crazy guy in Amsterdam (me) who had a bicycle shop.  I was a PhD candidate and then assistant professor.  I became the go-to guy.

Now four or five years later we have 40 PhD students in the Netherlands in different universities and domains, studying cycling.

The real innovation in thinking is seeing bicycles and trains, or a bicycle fast transit system, as one mode, not separate modes, not a feeder system.

For example, from my university in central Amsterdam I can choose between 200 different trains within a 20 minute bike ride, in all directions and speeds.  A car would be a hassle for me now.  I have one transit card, I have exact online information, I know which stations have good coffee.

This system has been growing for 15 years but there has been no policy attention.  Train policy ends at the door of the station.

We have 600,000 passengers coming [to the trains] by bike and so major bike parking issues. But some say “look at all the parked bikes at the station, what a problem.”  That’s not a problem – just a symptom of something that is hugely successful, despite the fact that we didn’t plan for it.  It’s our luxury problem.

So we are working on connecting a bike rental system to the trains and just trying to build more bike capacity at stations, because we are a bit embarrassed. Dutch policymakers don’t like it.  It’s a mess.  But it’s a beautiful problem to have. 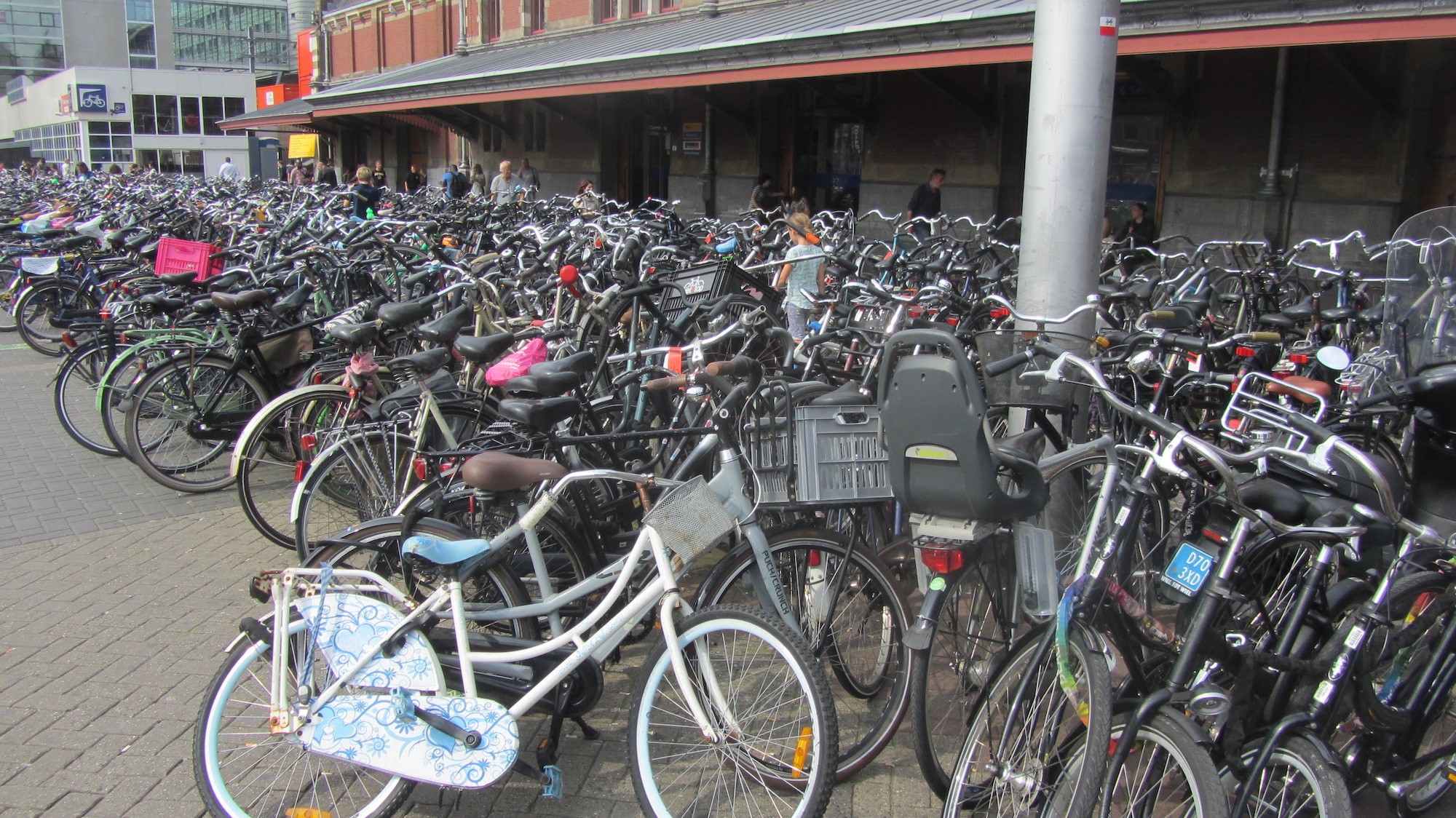 And now you are exporting this knowledge to the world?

We have 150 delegations annually coming to Amsterdam to learn about cycling. The Netherlands is famous for water policy consulting, so we send experts to New Orleans after the hurricane, or protect coastlines in New York. Maybe we should do the same around cycling urbanism.

But cycling itself is not so interesting. You put Ford GoBikes here and then you have bikes.  But it’s the entire system and the culture around it, and what it means for city life.

In the Netherlands, 80 percent of the population lives within biking distance from a train station, and has an average of 3.4 stations nearby.  We have this hugely flexible system that completely wipes out the car.  It has speed, flexibility, built in exercise and sociability, you can go everywhere and get a bike on the other side. That system can work in many places around the world.

But how do you get there from here?

It’s a long term process. In 1992, we had a referendum in Amsterdam to make the entire city car free, which we lost by a few votes.  But since then, without talking about it too much, the policy has become to phase out the car.

Now, 25 years later, you see the results. In 1992, the majority of trips in Amsterdam were by cars.  Now, they are almost completely gone.  The bicycle is around 50 or 60 percent. It wasn’t due to a big claim or policy, just a very gradual change. And it wasn’t a transport policy against cars, but to make the streets more livable.

How do you overcome resistance, since you need to displace cars if you want to use the space for bicycle infrastructure?

True, people see it as their right to park their car in a public space. But we tend to use the wrong language. We say “making it car-free” or removing cars. Instead you can say we are “making it child friendly” and creating more space to be outside.

In the Netherlands, when you say making it car-free, people see it as the exact same street but without cars, and they are against that. But you should show that you can do something different with the street that improves the quality for everyone living there.

But some American cities are just so far away from that model, with so little density.

In some places in the US, I’m willing to give it up and say that European solutions will not work.  I can’t see it happening.  In these places we need a mind like Elon Musk. I never understood where he came from until I biked along the Tesla factory in Fremont.  If this is your living environment then self-driving cars make sense here.

It’s the least worst thing you can do, to get people into electric, self-driving, safe cars.  But I’m still not satisfied, because it still means a very poor social fabric, people not meeting each other, people not getting physical activity.  There are all these elements that are not solved.

I’m becoming very aware of my naiveté.  By traveling abroad, I can see how the bicycle is a very specific and simple way to solve many complex problems.

To tell that story, we’ve made a documentary, called Why We Cycle, that is now traveling the world.  It’s a documentary about my daily life, so I look at it as nothing special to see here, but we found that there is a lot to see.