Germany’s coal industry is a stain on its reputation as a climate leader. A group of determined activists are fighting back to keep the Hambacher Forest from becoming a lignite mine. L. Michael Buchsbaum takes a look.

Perhaps nothing symbolizes the struggle over Germany’s energy future more than the Hambach Forest and the adjacent Hambach lignite mine.

Comprised mainly of oaks and hornbeams, the 12,000 year-old forest is home to 18th century trees and over 140 endangered species. Previously covering over 5,500 hectares, beginning in 1978, the Essen-based RWE AG power company began cutting it down to excavate and burn the vast amounts of brown coal lying beneath. Now less than a tenth of the original canopy survives, with a core of only 200 hectares remaining.

In its place lies one of the largest holes in Europe. Between 370 to 450 meters deep, the mine stretches across an 85-square kilometer moonscape and workers annually extract some 40 million tons of brown coal.

Lignite from this and two other nearby mines are burned by five adjacent power plants that generate about 15% of the electrical needs of the German state of North Rhine-Westphalia. But since lignite is so filthy, these plant’s combined carbon emissions alone were responsible for roughly ten percent of Germany’s total CO2 output.

Though RWE publicly states that one of their aims is to lower overall CO2 emissions, there is no escaping that their current business model’s health fundamentally relies upon generating pollution.

Symbol of a Green Movement

As Germany’s movement to stop coal has grown, so too have efforts to preserve Hambach. Over the last six years, deeply committed activists have occupied parts of the forest, building “houses” in the tallest trees along with a network of above-ground walkways in an effort to prevent the woods from being cut down. 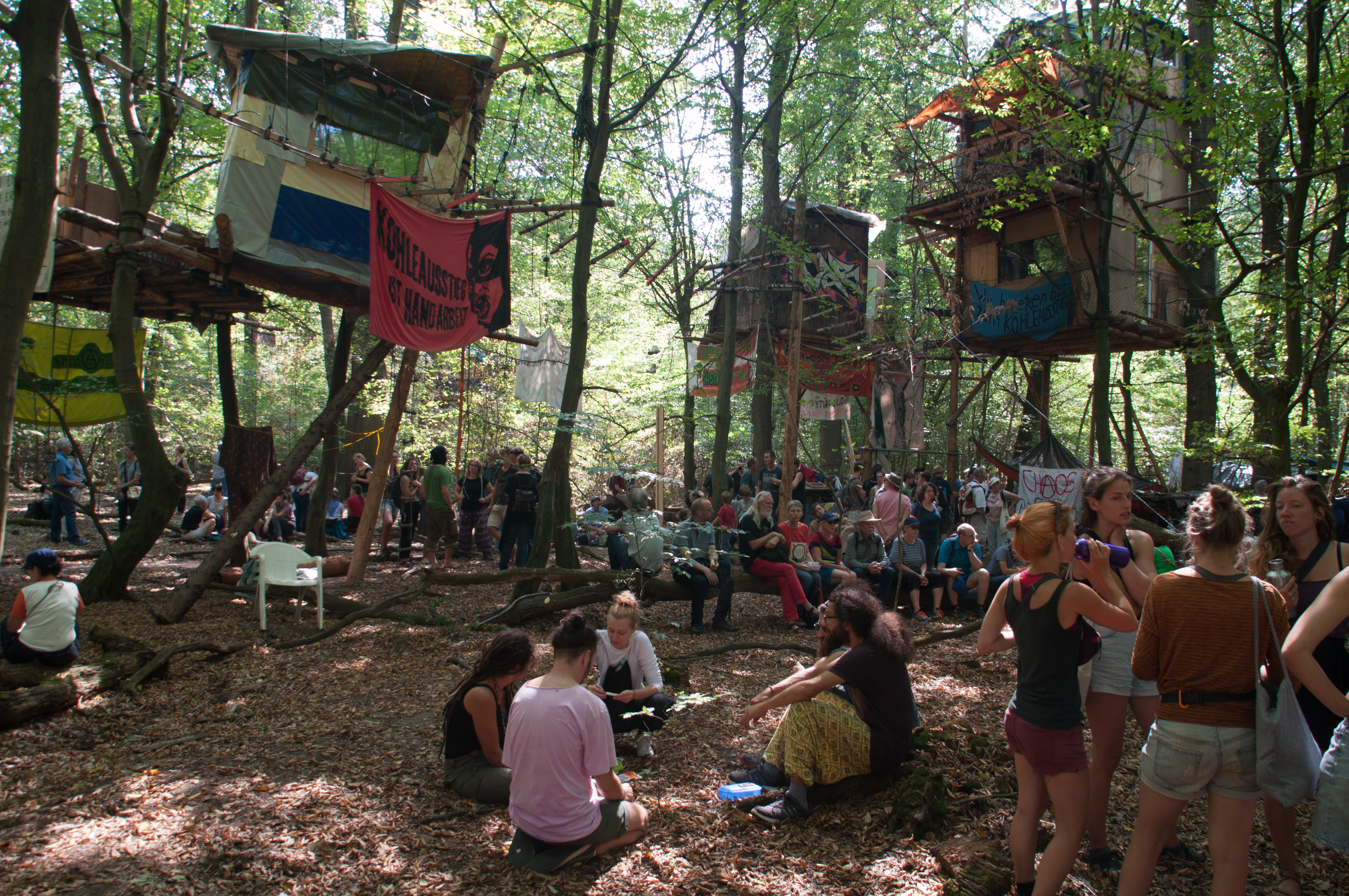 Several weeks ago, RWE sent a letter to the Chancellor’s Office and the Ministry of Economic Affairs detailing their intent to mine through the rest of the forest beginning this October. It was then forwarded to the 28-member federally convened Commission on Growth, Structural Change and Employment, popularly known as the “Coal Commission” and mandated to develop a “coal exit” plan for the nation by the end of the year.

The panel, which includes representatives from politics, science, industry, trade unions, environmental organizations and citizens’ initiatives, follows upon the German democratic tradition of collective decision-making, one which successfully helped create the nation’s on-going nuclear wind-down (the last plants are on track for closure by 2022). However, by publically declaring their intent, RWE has thrown down the proverbial gauntlet.

The company’s statement created a split within the Commission. Six Commissioners including representatives of Friends of the Earth Germany (BUND), Greenpeace, the initiative “Buirer for Buir,” the Greens, and others announced their intent to resign in protest if RWE clears the Hambach.  In response, Frank Weigand, RWE’s CEO reminded them that the company is legally allowed to continue mining through 2045, stating “that the clearing measures are simply an operational necessity” that has nothing to do with discussions currently underway by the Commission.

Just the same, following a weekend of demonstrations and clashes with the police, the six Commission members expressed their support for environmental activists occupying the Hambach by joining protesters on site. Members hung wooden panels on trees with the inscription: “This tree must not die for coal”. 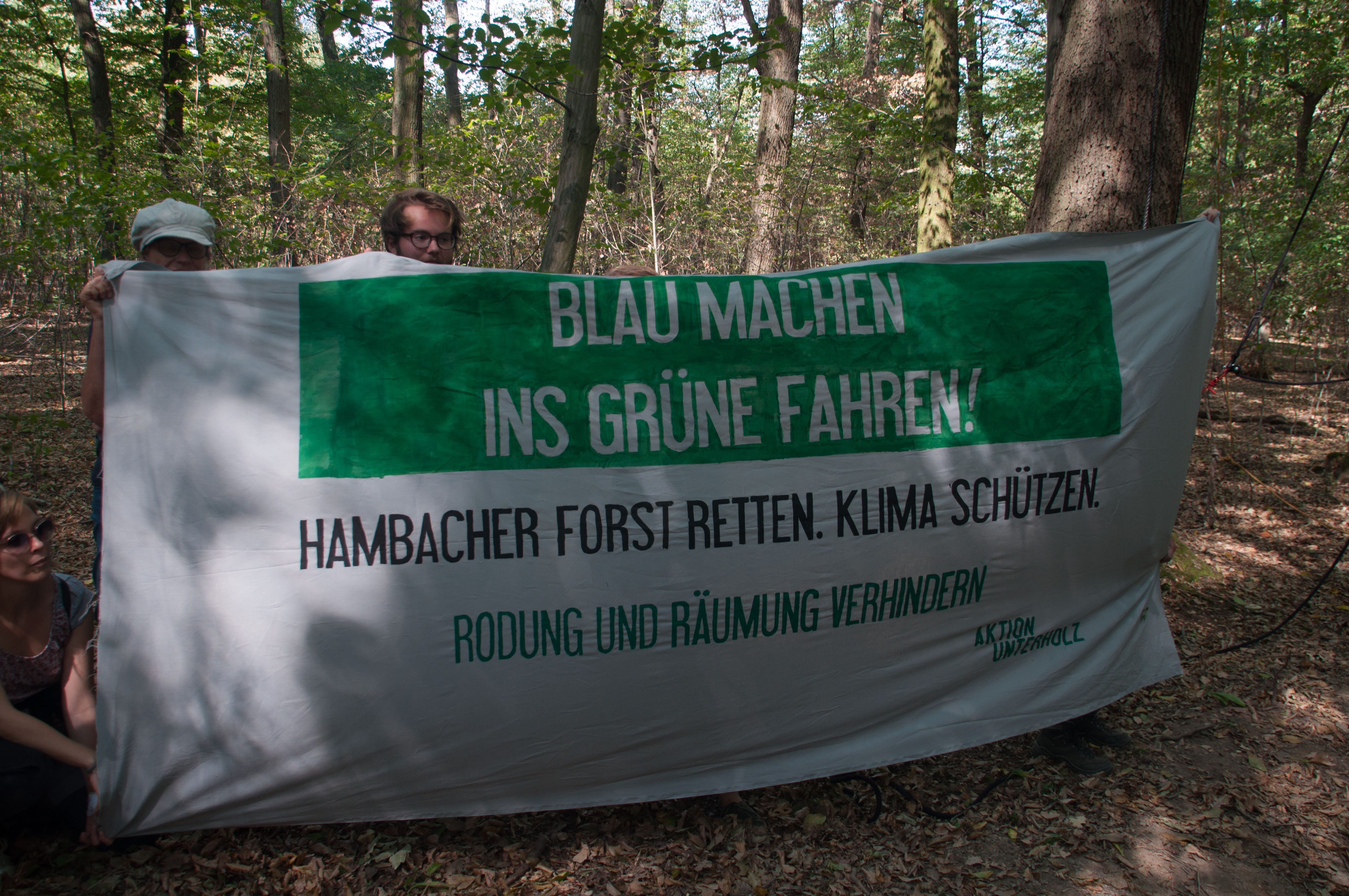 Under the forest canopy, Martin Kaiser, Executive Director of Greenpeace stated that “the hot summer of 2018 has finally reversed the perspective: the Hambach Forest does not block the excavators, but the excavators block climate protection.”

Commission member Antje Grothus, who lives in the town of Buir—once a quiet village on the edge of the Hambach Forest who’s future will be the enlarged coal pit on its doorstep, criticized the company stating “RWE escalates conflicts while creating facts: Forced relocations, compulsory expropriation. The destruction of the Hambach Forest must finally cease.”

While condemning the violence committed on both sides, the members demanded a moratorium on any and all further lignite expansion in Germany, particularly as the Commission meets.

Trying to prevent an unbearable situation

Back in Berlin, the Greens sent Federal Minister of Economics Peter Altmaier (CDU) and Environment Minister Svenja Schulze (SPD), who are jointly tasked with overseeing the Coal Commission, a letter demanding they intervene directly against the planned clearing. “If, as the responsible ministers, you take the work of the Coal Commission seriously, then now is the time to work hard for the RWE management as well as for the state government of North Rhine-Westphalia to ensure that the chainsaws remain switched off in the Hambach Forest” wrote Green Party leader Annalena Baerbock.

Surprisingly, Minister Schulze herself publically entered the dispute by joining calls for such a moratorium. She said logging activity in the embattled Hambach Forest would create an ‘unbearable’ situation” that threatens the ability of the commission to come to an agreement. “If a social consensus is to be organized, then no fait accompli may be created during such a phase.”

Back among the trees, activists from across Europe are answering a call to arms to prevent further destruction. Just as the modern Green Party developed out of demonstrations against nuclear power in the 1970s, the Hambach Forest may also become a turning point in the fight against coal.

“The crux is we have to get it right,” said Brandenburg Prime Minister Dietmar Woidke, whose region also depends on jobs within the Lausitz mining district. “There are 40 coal regions in the EU and they’re all watching what Germany does. Get it wrong and we’ll be a role model for none.”

Following a fourth meeting in Berlin in late August, the Commission will travel to the Lausitz in late September for its first external meeting. They have also been invited to tour the Hambach Forest, as long as it still stands.