With wind and solar booming, researchers are looking for ways to turn electricity into other products, to cut carbon and integrate renewables into the power grid. Power-to-X could go a long way towards these goals, says Ben Paulos.

Because wind and solar are driven by nature, there are times when they produce more or less energy than is demanded.

It turns out that managing their hourly or even daily fluctuations are not a big deal.  Grid operators have seen days with more than 60% wind power in the US Midwest or 85% total renewables in Germany.  Grids already have a certain amount of flexibility – they can turn fossil and hydropower plants up and down; they can import or export power from their neighbors; or they can pay their customers to use less power.

But variations by season can be a bigger problem, especially without using a lot of fossil fuels.

Germany is a vivid example.  With the same latitude as Alaska, the winters are dark in Germany, and solar power dwindles to near nothing, as shown in the chart from Fraunhofer Institute.  Fortunately, winters also see brisk winds blowing off the North Sea, delivering large amounts of wind power. 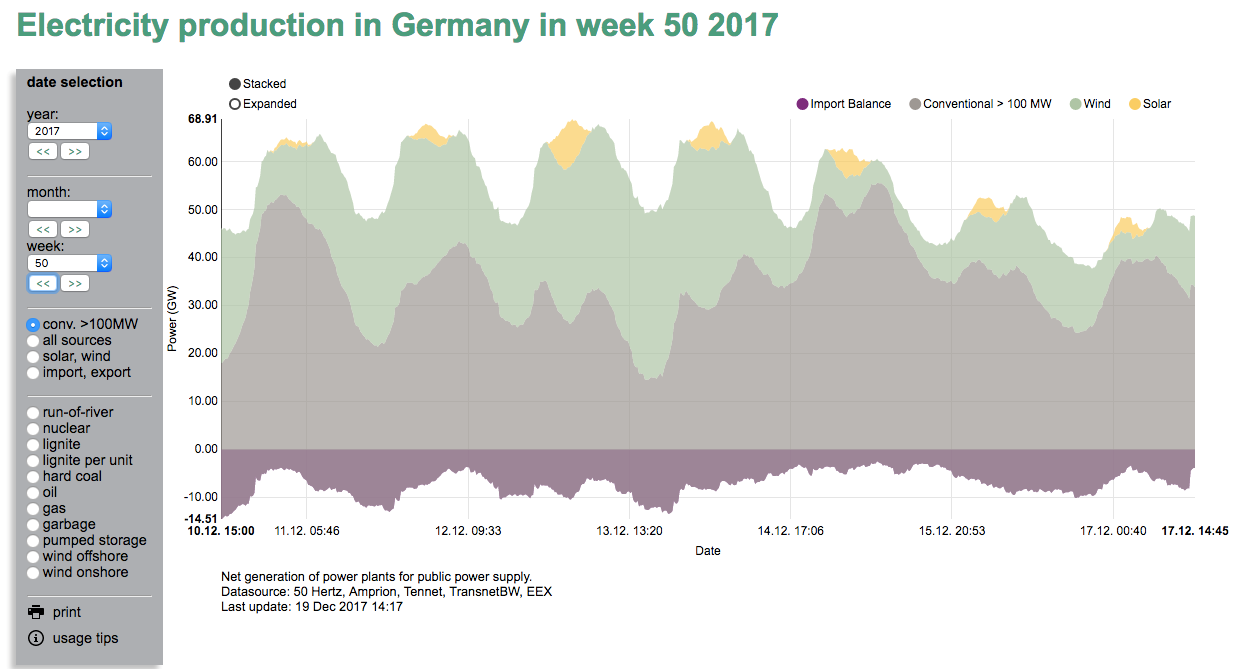 With lots of solar panels in the south and wind turbines in the north, this makes the north-south transmission expansion currently underway critical to making renewables work in Germany. Still, running the country on just one or few fuel sources is risky. And if Germany is to phase out fossil and nuclear fuels, it will need something else to make up for seasonal shortfalls in wind and solar output.

Energy storage is an obvious answer to a system with no fossil fuels, but most storage technologies on the market now have a very short duration. The lithium-ion batteries that power electric cars work on the time scale of hours. Pumped hydropower, where water is pumped behind a reservoir and then released through a turbine, works on the scale of days or weeks, typically.

If the goal is to shift abundant summer solar power into the dark winter nights, something very different is needed.

In some cases that means electrification, converting other sectors to electricity to help soak up that abundant wind and solar power. Regulators and stakeholders from Germany and California recently met to discuss how to displace fossil fuels by using renewable power in electric vehicles, heat, and other industrial applications.

But researchers are starting to look beyond, at ways to convert electricity to longer-lasting and storable products. This emerging suite of technologies and strategies goes under the banner of Power-to-X.

Power-to-X turns surplus wind and solar electricity into hydrogen, chemicals, heat, and other useful products.  There are at least 18 power-to-gas demonstrations underway in Germany with more in the works, according to the European Power to Gas Platform.

The X getting the most attention is hydrogen. Electricity can be used to split water (H2O) into hydrogen and oxygen, a technique known as electrolysis that dates back to 1800 and is well known to even grade school students.

Hydrogen can then be used in fuel cells, gas turbines, or engines to make electricity, or can be used as a feedstock in synthetic natural gas or other chemicals. Hydrogen can be mixed with natural gas and stored in natural gas pipeline and underground storage systems.  Existing gas systems in Europe can hold 12 times more energy than current pumped hydro systems.

The consulting firm DNV GL, writing in a paper for the European Power To Gas Platform, says the transportation sector is especially key in commercializing power-to-X technologies. Honda and Toyota are both selling passenger cars that run on hydrogen, while a variety of ships, buses, planes, and industrial vehicles are experimenting with hydrogen fuel cells.

But while electrolysis technologies are well known, they are currently a significant cost barrier to producing renewable hydrogen.  “For many of the above mentioned functionalities of power-to-gas there is currently not yet a business case,” DNV writes. “Significant cost reductions and efficiency improvements are required to enable its deployment on commercial scale.”

The Power-to-X Alliance, composed of Audi, Airbus, and other companies, proposed legislation in Germany in November that would help commercialize power-to-X technologies, with incentives based on tons of carbon avoided.

Europe is far ahead of the US on power-to-X, where it is still largely considered an exotic concept.  But one innovative project is exploring the potential for wind power to improve farming practices.

The University of Minnesota at Morris formally dedicated a project in 2013 to start using wind power to make synthetic fertilizer for farming. Producing nitrogen-based fertilizers accounts for roughly 40% of the energy that goes into producing corn, increasing the carbon footprint of meat, dairy, and ethanol.  Moreover, nitrogen is itself a potent greenhouse gas.  When it emits from the soil in the form of nitrous oxide (N2O) it has a global warming potential almost 300 times that of CO2.

Because air is 78% nitrogen, researchers in Minnesota are able to use wind-powered electricity to pull nitrogen from the air and to split water into hydrogen.

“We have core constituents of anhydrous ammonia which are nitrogen gas and hydrogen gas,” explains Michael Reese, renewable energy director for the project.  “And then we use the standard Haber-Bosch process to produce nitrogen fertilizer.”

The Haber-Bosch Process, developed by two German scientists in the early 1900s, was key to creating the large amounts of low-cost fertilizer that enabled the explosion in farm productivity in the 20th century, known as the Green Revolution.

University of Minnesota graduate Norman Borlaug developed varieties of wheat in the 1940s that could thrive on the synthetic fertilizer.  He won the Nobel Prize as the “father of the green revolution” and is credited with the food production that saved one billion lives across the globe.

“Today, the problem is more complex,” according to the University. “We need to produce significantly more food AND use clean energy while protecting the environment for future generations.”

“In the spirit of Dr. Borlaug, our research team is striving to meet the grand challenge of feeding the world and sustaining the environment through a Green Nutrient Revolution.”

Below is a video explaining the German Government’s energy targets, and what role Power-to-X can play.