In the next few years, a large number of wind turbines will run out of eligibility for feed-in tariffs after twenty years. Even if they are still running well, they are likely to be dismantled for several reasons. Craig Morris investigates.

Biomass, solar and wind: the most likely scenario is that old wind and biomass capacity will be torn down (Photo by Florian Gerlach, edited, CC BY-SA 3.0)

In 2000, Germany’s Renewable Energy Act (EEG) went into effect. Though the country had had feed-in tariffs since the Feed-in Act of 1991, new installations grew for wind power considerably after the EEG became law. The record year was 2002. 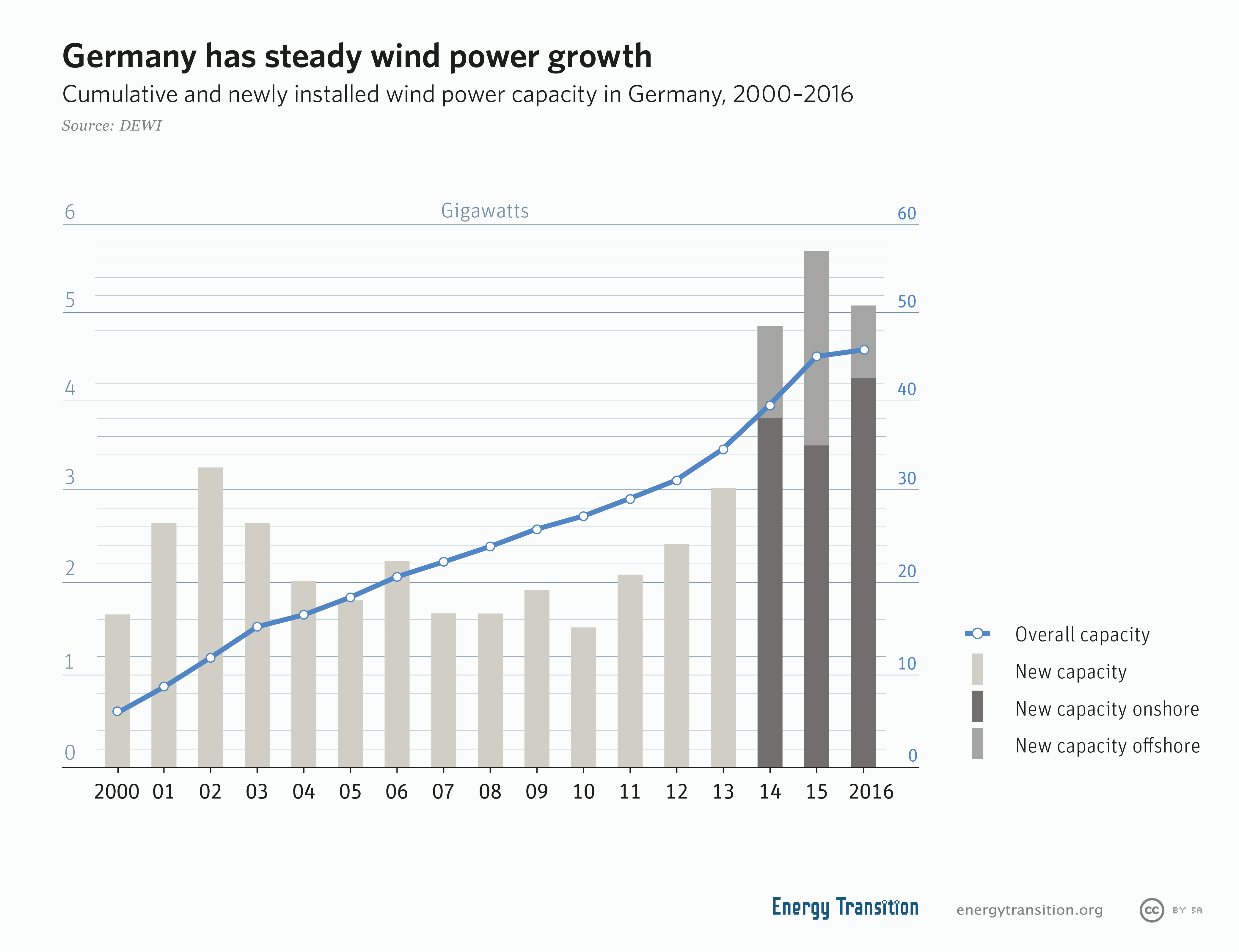 In addition, solar and biomass systems were also built in significant volumes for the first time after 2000. For PV, the issue is relatively straightforward: the systems have almost no maintenance costs and were largely built on rooftops. Owners can therefore consume the power directly (or store it as battery systems get cheaper). So solar arrays can be left running.

For old biomass units, the future is less clear, as a new report (in German) by the Leibniz Information Centre for Economics (LBW) argues. Such systems can be complex, and expensive revamps may be necessary. Most of these systems can be expected to close. However, this sector (along with PV) was not really significant until the EEG was amended in 2004. So neither PV or biomass retirements would have a major impact until the mid-2020s.

Wind turbines also have maintenance costs, and they can rise after 20 years of operation. They would have to be below the wholesale power price for a turbine to remain profitable once the feed-in tariffs elapse. Currently, wholesale rates are quite low at close to 3 cents but are expected to rise by 2023, the first year after the nuclear phaseout is completed in Germany. Removing that excess capacity will bring prices back up, as would additional coal plant closures currently being debated.

Indeed, some experts believe wholesale prices could double to six cents by the middle of next decade – one reason why recent winning offshore win bids simply said they would accept whatever wholesale rate was available. That step could be tricky, however, because wind turbines drive down the price of power on spot markets, which rise again when less wind and solar power is available. Wind turbines react to the weather, not to power demand, so average spot market prices don’t apply. Firm contracts based on wholesale rates will still be needed.

The LBW’s findings are in line with those of other publications, such as this one (in German) by Energy Brainpool. A previous study from 2016 for offshore wind turbines came similar conclusions (with some nice charts). But the LBW adds another option that seems unclear at the moment: old turbines could participate in new auctions. The idea is that the prices that recently won contracts – still above four cents – are higher than current wholesale prices and could be high enough to make further operation of twenty-year-old wind farms profitable.

If so, they wouldn’t be able to stay online for another 20 years – and this is where that thinking starts to fall apart. The LBW authors argue that a shortfall in new capacity additions could result if winning bids aren’t completed on time or at all. Continued use of old wind farms could easily fill that gap quickly, the authors propose – but the major deadlines that might be missed don’t come until 2023, a fact the paper doesn’t mention.

Furthermore, there is increasingly pressure on existing projects to repower (replace old turbines with new ones) because land is increasingly scarce. People near these old wind farms are used to having turbines nearby and might therefore be more likely to welcome repowering than people with no exposure to turbines might for new projects.

Nonetheless, the option of offering the winning bid price to old wind farms if new projects are delayed is an idea worth looking into. So is the proposal to have old biogas units run as backup units when spot power prices are higher. The problem here is technical: the earliest biogas units were not built to be flexible, and biogas production itself runs in batches that cannot be interrupted.

In both cases, the most likely scenario is that all this old wind and biomass capacity will be torn down. Only the old PV will largely remain online, perhaps even for 30 or 40 years. We still don’t know how long solar panels are good for, only that they “degrade”; output falls to 85% after 25 years. But solar panels operating at, say, 50% after 40 years is still a good thing, especially if it costs nothing to leave them running.