Whenever we talk about getting cities back from cars, there’s pushback. Don’t people love their cars? Don’t we have cities built for cars because that’s what people wanted? Not exactly. Today, Craig Morris takes a look at the German town of Freiburg, and how citizens are taking their streets back. 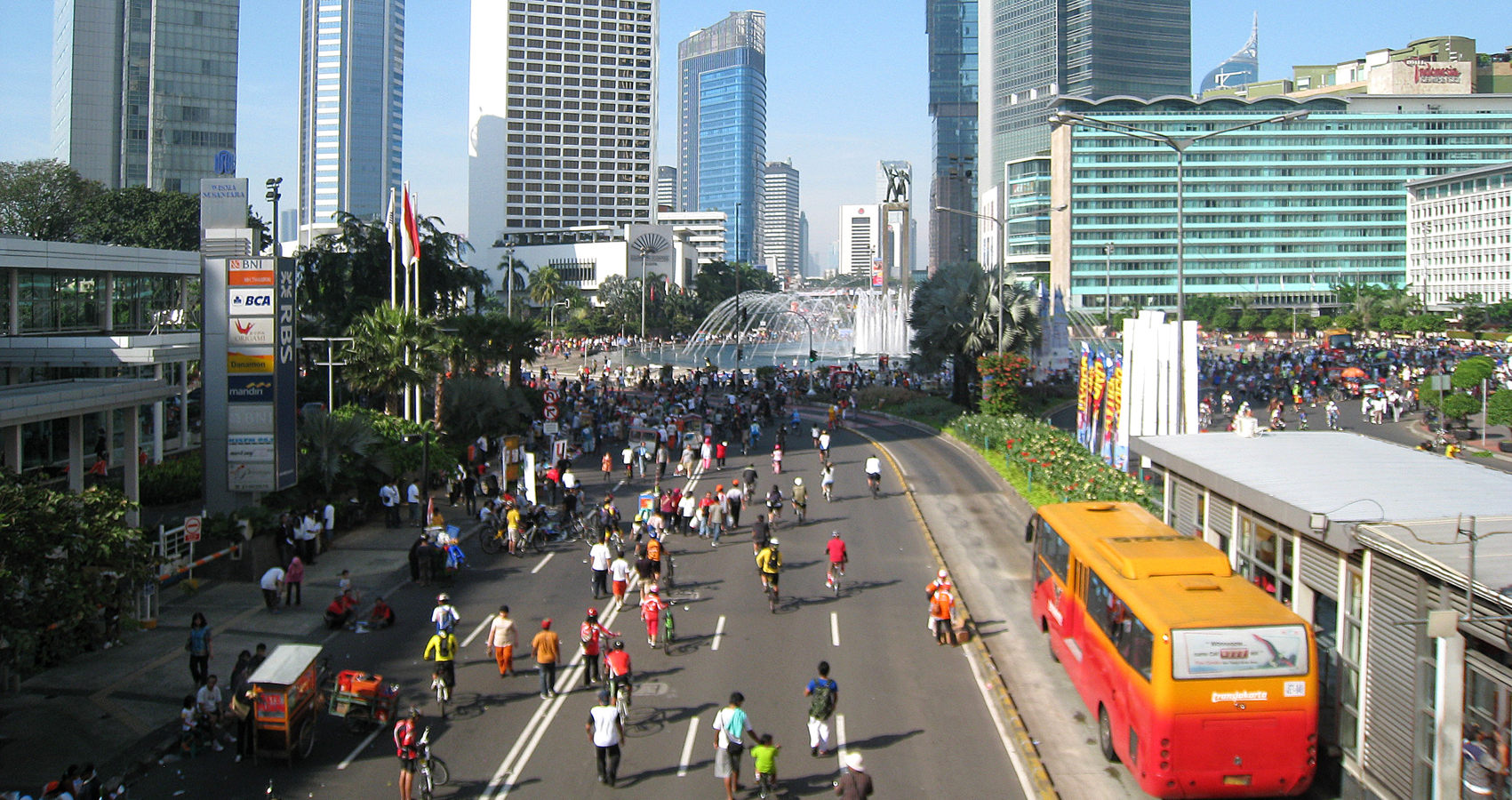 Jakarta goes car-free once a month – but imagine the quality of life if the streets were always like this! (Photo by Gunawan Kartapranata, edited, CC BY-SA 3.0)

In 1871, Bismarck’s newly united Germany defeated the French in a short war. Monuments celebrating this victory went up across the country. Freiburg erected one, too, at a major intersection along the northern edge of the historic center of town. The monument survived both world wars unscathed. But the city filled up with cars in the 1950s and 1960s, so the monument was moved 100 m away, where it stood for half a century – unvisited on the edge of a parking lot, where drivers of city buses park to take a break. Two world wars couldn’t change the monument, but city planners did not hesitate to get it out of the way for cars.

The “Victory Monument” (Siegesdenkmal) in Freiburg in its original location, back when streets belonged to people. (Public Domain)

When I moved to Freiburg in 1992, the city had just banned cars from the city center. But you could still see how cars had been given priority over people. To get from the university buildings to the library, for instance, you had to cross a footbridge over a four-lane road – there was no crosswalk on ground level at all at a place where thousands of students had to cross the road daily! Further down that road, there was a tunnel where people walked into the historic center from central station. People thus had to go up and down stairs at various places in town so that cars could pass uninhibited by pesky pedestrians.

I could continue with examples just from Freiburg, but you get the point. (If not, take a look at what Le Corbusier wanted to do to Paris in the 1920s.) Most Germans think that their cities were rebuilt without numerous historic buildings, but in fact the restructuring of historic urban patterns to accommodate cars after the war destroyed more of these structures than the war did.

This video from 1970, one of the last years of car-centric planning in Freiburg, starts off with a view no Freiburger would begin with today: the autobahn. We then see high-rise apartments (praised as modern) on the edge of town, but they quickly became a ghetto; no one wanted to live there. The wording at 0.50 is telling: “Freiburg doesn’t look like it does on tourist postcards: modern, spacious, and not 850 years old at all.” That was meant as a compliment back then, but the experts were wrong: people didn’t want a car-centric Freiburg.

Visit Berlin, and you’ll notice there are only trams in the (former communist) eastern parts of town. In the west, the trams were removed in 1967 to make more space for cars (video). Cars were synonymous with progress – but only for decision-makers. People protested many of these changes, but the public was not held to be knowledgeable enough to have a say. People could vote, but no parties opposed redesigning cities for cars. So that was that.

It was no different in the US. People used to own the streets: they could stand in them, kids could play in them, and you could cross them whenever and wherever you wanted – just like you can in pedestrian zones today. In the 1920s, US carmakers responded to public outrage about cars endangering people (see, people didn’t want them!) by coining the term “jaywalking” (meaning “walking like a country hick in the city”). Policymakers then began fining people for getting in the way of cars. Small sections of public space were carved out for people. Cars got most of the space.

Cities feel a lot less welcoming when you highlight the places pedestrians aren’t supposed to go like this. pic.twitter.com/5cq78PuzgE

Freiburg has since made that four-lane road between the library and university a pedestrian zone. The footbridge is gone. The pedestrian tunnels in town have been closed. People walk on the streets now; cars have to stop for them. On the map below, the triangles with exclamation marks show where that old thoroughfare has been turned entirely into a sidewalk.

And the Victory Monument? It’s being moved back to its original spot at the end of a pedestrian street. But what sense does it make, you might be asking, for a monument celebrating a war to be made more visible? Freiburgers are asking that, too (in German). But the German debate is more civil than the violent US one over Confederate monuments. Some want the Freiburg monument melted to create a new monument for peace. Others say it should be left as-is to mark that moment in history, but new plaques or QR codes could be added explaining what it all means.

Whatever happens, the decision will be based on a democratic debate. The Energiewende has made German politicians more responsive to public will over the past few decades. People are getting their city space back because that’s what they want; we only think we like cars when we can’t imagine getting around without them. Otherwise, they are usually a nuisance.

And if you are worried about what the French might think on seeing the Victory Monument made more prominent in Freiburg in whatever way is eventually decided, I leave you with a quote from a citizen of Freiburg at a town hall meeting on the issue: “The French are not that uptight.”