Successful oversight of trade group membership dues has faded away in many states across the United States, a new report says. Mark Hand of Think Progress explains how American utilities use their customers’ money to fight renewables, and subside fracking and nuclear. 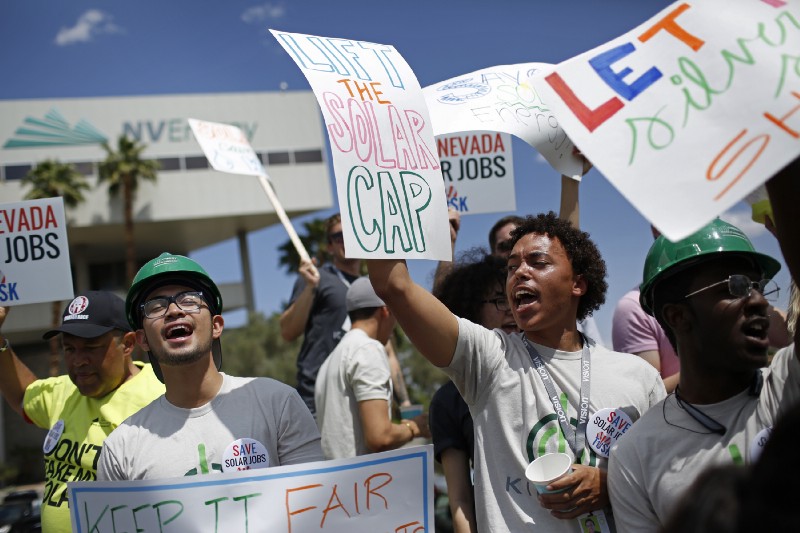 Few political organizations have the “luxury of subsidization” enjoyed by the Edison Electric Institute (EEI) and other trade groups that represent the utility industry, according to a new report.

Electric utility companies routinely receive permission from state regulators to include at least a portion of their dues payments to industry associations in their operating expenses, the Energy & Policy Institute, a research and watchdog group, said in the new report. Those operating expenses are passed on to customers, not to the shareholders of these investor-owned utilities.

“Given how these organizations promote fracking and natural gas infrastructure, propose bailouts for nuclear power plants, and spread misinformation regarding the science of climate change, they are also all political in nature,” the authors wrote in the report.

The report, “Paying for Utility Politics: How Utility Ratepayers Are Forced to Fund the Edison Electric Institute and Other Political Organizations,” focuses on the Edison Electric Institute (EEI), the trade association for the nation’s investor-owned electric utilities, as an example of political influence from a utility association. The report’s authors argued that the membership dues might not be funding activities that EEI defines as lobbying, under the Internal Revenue Code, but they still fund certain types of political activities.

For many years, the National Association of Regulatory Utility Commissioners (NARUC), an association of state regulators, worked with industry trade groups like EEI and the American Gas Association (AGA), which represents gas utility companies, to break out the membership dues and decide which costs could be recovered from ratepayers.

But that system ended more than a decade ago. Today, on its membership invoices to members, EEI highlights what percentage of costs are used for lobbying, based on the Internal Revenue Code. The utility company then uses that percentage to determine what to charge to shareholders. The remaining portion is charged to customers.

“The lobbying portion of EEI’s dues, which is not recoverable, is calculated and reported each year using the Internal Revenue Code’s … definition of ‘lobbying and political activities’ as required to be reported on IRS Form 990,” Reil said. “EEI activities in certain regulatory proceedings and communications efforts, for example, are not lobbying as defined by federal law.”

The D.C. metropolitan region is filled with associations that represent almost every business or industry. These groups create educational materials, provide training to their members, and engage in public advertising campaigns, while their lobbyists seek to change policy at federal, state, and local levels. The groups can also conduct fundraising on behalf of political candidates through associated political action committees (PACs).

The American Gas Association, Nuclear Energy Institute, and U.S. Chamber of Commerce are other associations whose annual membership dues are often included in utility companies’ rate requests, according to the report.

The groups’ political stances might be problematic — or even against the interests of — the ratepayers who are funding their utility’s membership. For instance, renewable energy advocates have complained about EEI’s stance on rooftop solar in some states. The recent growth of solar energy along with net-metering policies haveled investor-owned utility companies and EEI to campaign to either weaken or do away with net-metering programs in states, according to the Energy & Policy Institute.

Matt Kasper, research director at the Energy & Policy Institute, contends that state consumer advocates and attorneys general are justified in asking the investor-owned utilities how ratepayers benefit from the fees that go to EEI. In his research, Kasper, who co-authored the report, found that an Oklahoma-based utility submitted invoices to its regulator that revealed the utility company’s EEI dues increased every year from 2011 to 2016, a total of 26 percent over that timespan.

As consumer advocates and offices of attorneys general see the increased membership dues, “they’re probably going to be more inclined to challenge them,” Kasper said.

Under its old relationship with trade groups, NARUC conducted annual audits of the financial records of EEI and other industry trade groups. Based on the audits, state regulators would rule whether utilities could collect a significantly smaller portion of their EEI dues from ratepayers.

However, more than a decade ago, NARUC’s audits of EEI and the other groups stopped, creating difficulty for consumer advocates to understand how the groups spend ratepayer money. The report’s authors recommended NARUC revive its Committee on Utility Association Oversight, a committee charged with reviewing the costs of the utility associations.

The committee, which was disbanded in 2000, could determine the percentage of trade groups’ operations that are political in nature and therefore should not be funded by ratepayers. Some consumer advocates and watchdogs, including the Energy & Policy Institute, believe there are cases where customers should not be required to pay for any amount of a utility’s membership fees in a trade association.

Certain states continue to take a close look at utilities’ membership fees in industry trade groups. In California, The Utility Reform Network in 2013 succeeded in getting 43.3 percent of EEI dues paid by Pacific Gas & Electric Co.’s shareholders during that utility’s rate request and not by ratepayers, rather than the 25 percent the San Francisco-headquartered utility had originally requested.

“But successful oversight of EEI dues has faded away in other states,” the report said. The independent review of industry association dues that was once provided by NARUC has been replaced by “an unreliable system of self-reporting” by EEI and its utility members, which have a “self-interest in maximizing the amount of their dues” that will be paid by customers, the report concluded.

This article has been republished from ThinkProgress.