This is the second article in our series about biopower: read part three here.

Producing electricity from biomass is one of the most controversial and least understood forms of renewable energy.  In this three part series, we explored myths and facts about biopower. In this second installment, Ben Paulos tries to make sense of a seemingly simple question – is biopower good for cutting our carbon emissions?  It is anything but simple. 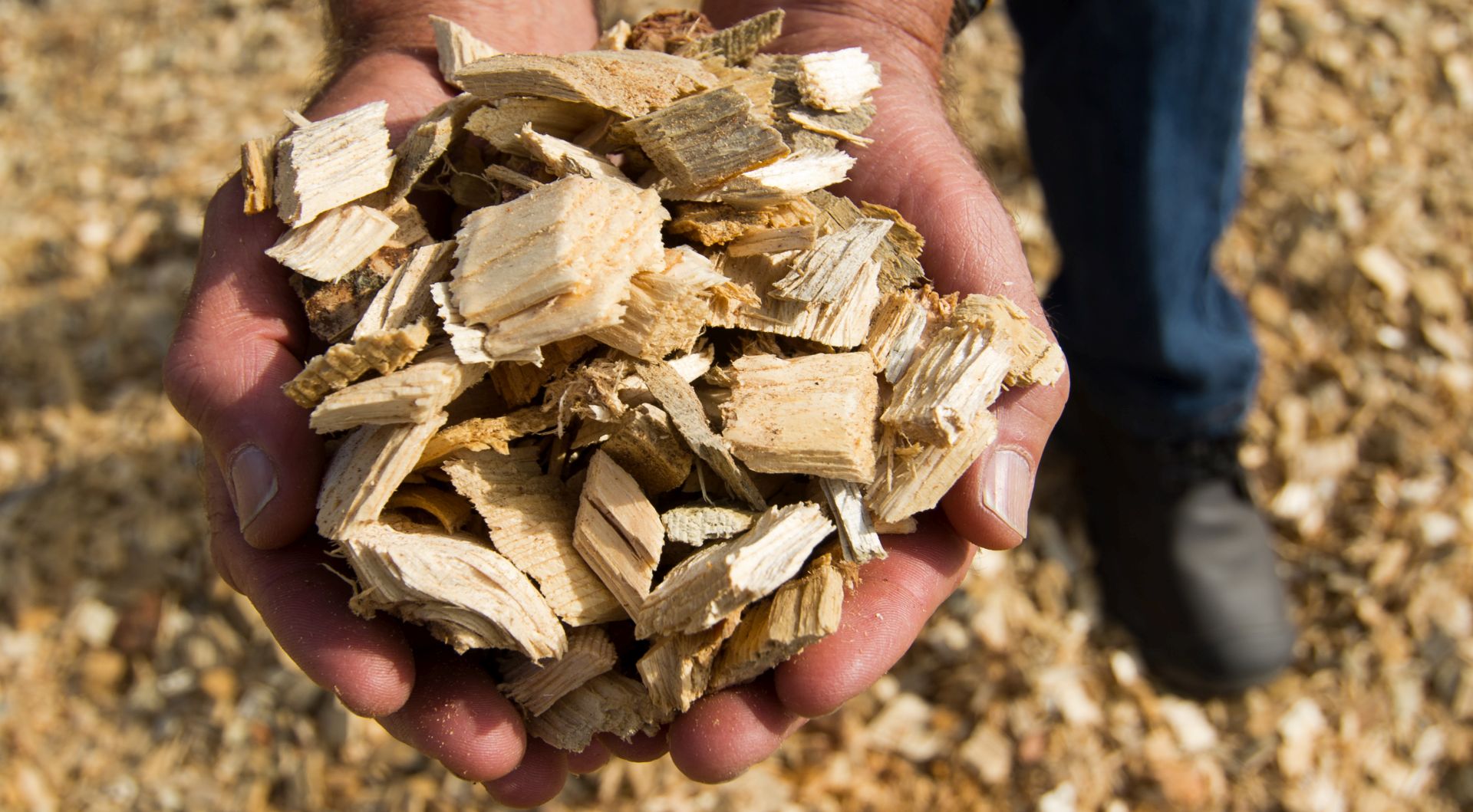 Biomass: does it hold the key to reduced emissions? (Photo by Oregon Department of Forestry, edited, CC BY 2.0)

While rapidly growing wind and solar energy attracts daily headlines, a skirmish in the US Senate has brought increased attention to the slow-moving and often overlooked biomass power industry. The controversy? How to measure the carbon emissions of biopower.

Under the authority of the Clean Air Act, the US Environmental Protection Agency (EPA) is developing the Clean Power Plan to reduce carbon emissions in the power sector. While measuring emissions is straightforward for fossil fuels (large) and wind and solar (none), biomass is more complex.  The carbon emitted from the smokestack of a biomass power plant comes from recently grown trees and plants, in a short carbon cycle. Scientists use “life cycle analysis” to count the net emissions from the process.

As a result, EPA has convened a Scientific Advisory Board to make recommendations on how to measure “biogenic” emissions from biopower. That panel has been meeting for over five years, and has yet to issue a final report.

Leery of the lingering uncertainty, industry backers like the National Association of Forest Owners (NAFO)  convinced friendly senators, including Susan Collins (R) and Angus King (I) of Maine and Amy Klobuchar (D) of Minnesota, to include a “tripartisan” amendment to a budget declaring that biomass should be considered “carbon neutral” under federal policy, circumventing the EPA’s process. The amendment had no opposition in the Senate, and was not addressed by the more conservative House. The two versions may be reconciled this fall, after the elections, though the surprising presidential election results make budget actions uncertain.

Environmental groups, outraged, have ratcheted up efforts to block that provision. “Legislating the carbon neutrality of an emissions-producing technology sets a dangerous precedent for all climate science, in that it attempts to override physical facts with policy declarations,” wrote a large coalition of groups, including 350.org and Greenpeace.

The scientific stalemate that led to this political fiat underscores the difficulty of the task – the “physical facts” are simply not clear.  A number of fundamental questions are essentially impossible to answer, or the answers are determined solely by how the question is asked.

Four sets of questions have tripped up the process: time frames, spatial boundaries, the fate of the feedstock, and attribution.

From a carbon perspective, a forest is a continuous flow, with a total stock that changes over time.  Carbon is constantly absorbed into growing trees and it is expelled from leaves and dying trees into the atmosphere.  But measuring the carbon impacts of bioenergy requires setting a starting point and an end point.

Scientists have developed the concept of a “payback period” to measure how long it takes for carbon from burned wood to be reabsorbed by growing trees.

But should the clock start when the tree sprouts from a seed, or when it is burned for energy?  Are we spending the carbon we have already saved, or are we stealing that carbon from our children?

And how much time for the payback period is acceptable?  Should we allow only things that pay back quickly, since climate change is an urgent problem, or should we count longer options that will deliver benefits to future generations when they do pay back?

At a recent meeting of EPA’s Scientific Advisory Board, time frames were a key topic of discussion.

Steve Hamburg, Chief Scientist for the Environmental Defense Fund (EDF) said that the right time horizon “is a policy decision, not a scientific decision.” He argued that the Board should not talk about 100-year time frames, but instead should “make clear the implications of picking different time horizons, as opposed to a priori picking a time horizon.”

Ken Skog of the USDA Forest Service pointed out that since biopower with longer payback periods still delivers benefits over time, the time frame for the policy is critical.  “The science tells us that climate benefits would be ignored with a shorter time frame.”

Measuring the carbon implications of biopower depends hugely on how boundaries are defined.  Since everything is connected to everything else, the first task of a life-cycle analysis is to define what is going to be measured and what will be excluded.

The most immediate boundary to define is whether we are measuring the tree, the stand of trees, the forest, or the biome, or the county, state, region, or country.

In one common story line, a single tree grows, is cut and used for energy, and then is replanted and grows again.  The carbon in the tree must be paid back, which may take decades.

Carbon is not “sequestered” for long periods by trees, but by forests.  Trees come and go, but a well-managed forest can last forever.

Some have proposed extending this thinking nationwide: if the overall volume of trees stays the same or increases over time (as has been the case in the US for many decades), then there is no net carbon emissions from wood-based biopower.

Just as in a novel, “fate” is the scientific term in life-cycle analysis that describes the destiny of a given thing.

If a tree is burned for bioenergy, the emissions go into the atmosphere.  But what would happen if it weren’t burned?  Trees don’t live forever; when they die, the fall down and rot (or they burn in a forest fire) with much of their carbon going into the atmosphere anyway.

Likewise, wood waste from harvesting operations can be left in the forest floor to rot, or it can be collected and used for energy.  While there are certainly implications for wildlife and forest health, the fate of the carbon is the same – it will be in the air sooner or later. If that is the case, why measure the carbon emissions from biopower at all?

Fate also determines the use of a plot of land.  What will a landowner do if they are prevented from cutting down trees for biopower production?  Will they develop the land into housing, losing the forest forever and boosting carbon emissions?  Or will they donate it to The Nature Conservancy to be preserved, locking up the carbon long term?

As we mentioned last time, most wood currently used for biopower production in the US is leftovers from the wood products industry.  (Most pellet exports to Europe come from pulpwood, like pine trees.) When a mature tree is harvested, maximum value is extracted from each part of the tree. The trunk is used for high-value products like lumber and furniture, while limbs and bark are used for paper or particleboard. Anything left, or that has no ready market, is often burned for energy production.

And since the Clean Power Plan is only regulating emissions from the power sector, we aren’t counting the carbon implications of producing lumber at all.  (That brings up the same set of gnarly questions about lumber – how long will it last?  What is its fate? Does it have a lower carbon substitute?)

If a tree falls in the forest…

Like Zen riddles, these questions are largely unanswerable by science.  And to keep the discussion relatively simple, we have only talked about one form of bioenergy – trees used for electricity production.  There are many biomass feedstocks, many conversion technologies, and many end products – all with their own calculations and complications.

The mother of all complications is known as ILUC – indirect land use change – which is part of the carbon accounting of biofuels like ethanol.  Because land is finite, the ILUC theory says biofuel production that displaces food production will force food to be produced somewhere else in the world, thus displacing wild land.  The loss of that wild land must be counted in carbon terms and added to the total carbon from biofuels.  So far this highly contentious topic has not been applied outside of policies for liquid biofuels, since most US ethanol comes from corn.

While the public language of the debate around biopower carbon accounting tends toward black and white, the science is tangled up in complexity.

How these questions are resolved by policymakers will have a profound impact on the future of biopower, a topic we will address in the third installment in this series.

Bentham Paulos is an energy consultant and writer based in California.  His views are his own, and don’t necessarily represent those of any of his clients.