New nuclear: we know now it’s much more expensive than other options. But Central and Eastern European countries are investing in new projects (and the costs will be subsidized by tax payers). Policymakers argue that on the European grid, these prices make sense–but Jan Ondrich thinks otherwise.

According to the World Nuclear Association, there have been close to 15GW of new nuclear projects announced in Central and Eastern European countries over the past 5 years. All those projects will benefit from some form of state subsidy if they are ever going to be commenced and commissioned. The most popular subsidy scheme to enable construction of nuclear power plants is a mix of guaranteed power price at which the plant sells power to the power grid combined with state guarantees for debt and equity financing. The guaranteed power price is set at a premium to prevailing market price and linked to inflation to allow de-risked recovery of the initial investment. The difference between the guaranteed power price and the market price is covered by electricity consumers. The state guarantee to debt and equity financiers decreases the cost of capital by transferring the risk of the investment from the capital providers to tax payers.

The magnitude of intended public support to nuclear projects in CEE countries is not negligible. Assuming conservative unit investment cost of EUR 5,000/kW the intended nuclear investment program of CEE countries will need to attract EUR 75 billion. This is equivalent to 50% of the GDP of the Czech Republic, according to Eurostat data. Public support of this magnitude has a significant impact on competition on the relevant power market. Expensive nuclear power subsidized by electricity consumers crowds out electricity produced by privately financed and operated generators.

Liberalization of European power market and establishment of regional power trading hubs such as the Leipzig power exchange EEX introduce a fundamental question – what is the relevant market? European or national? The answer to the question is key for assessing whether the public support for new generation projects can be allowed or must be prohibited on the grounds of inhibiting competition. For example, the proposed two new blocks with combined installed capacity of 2,400MW of the Paks nuclear power plant in Hungary should generate 19TWh of electricity per year according to the government’s plans. This is a mere 0.6% of European power generation, but whopping 70% of Hungarian power generation. According to ENTSO-E, Hungarian power generation in 2015 stood at 27TWh and EU28 generation stood at 3,191TWh according to Eurostat.

At first glance one could quickly conclude that the relevant market for assessing the new nuclear project is European and therefore the proposed subsidy scheme cannot distort the market since the planned plant output is a mere drop in the sea of European power generation. Hungary’s power grid is connected to neighboring countries and one can trade power freely from Hungary to Germany or vice versa if it makes economic sense. Indeed, power prices in Germany and Hungary fluctuate around similar level of EUR 30-35/MWh and have experienced the same downward trend over the past 5 years.

This seeming similarity can be however caused by fluctuation of global commodity prices which influence power prices across the whole of Europe but have nothing to do with the fact whether Europe is one power market or whether it remains divided into respective national markets. Indeed, charts below shows that both Hungarian and German power prices follow development of global commodity prices, such as coal, gas and carbon. The charts below tell us that power prices in both Germany and Hungary are determined by commodities such as coal and gas. But they do not infer that Germany and Hungary consequently must be the same market for power.

If we want to establish that two markets are in fact one from the competition point of view, we must identify more than a common trend of a commodity price (power in this instance) in the two market. We must establish how closely correlated is the power price between the two markets. If the correlation between power prices is high, then the two markets can be considered as one market from competition point of view. In general correlation coefficient of 0.8 or higher is considered indicative of one market [Motta, M. (2004). Competition Policy: Theory and Practice. Cambridge: Cambridge University Press.] The table below presents correlation matrix of power price between CEE power markets after factors which may introduce bias (such as public holidays) have been accounted for. 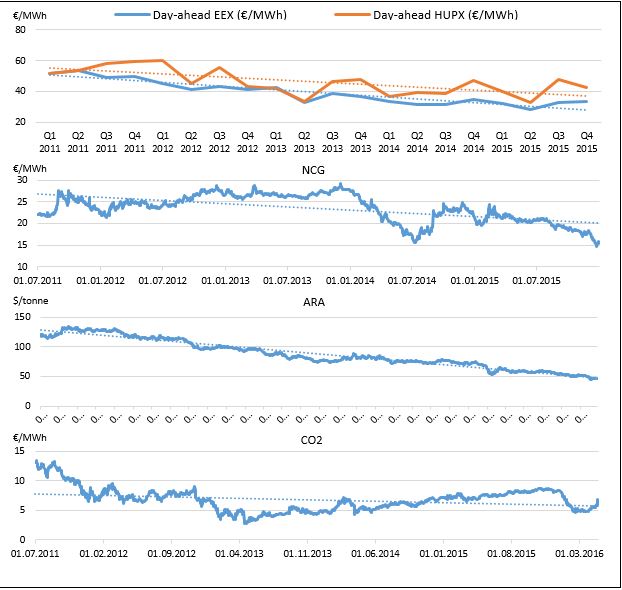 The table shows that in fact only Czech Republic and Slovakia form one power market from competition points of view. This comes as no surprise given that the two markets used to be indeed one and therefore the grid connection between Czech Republic and Slovakia is robust enough to enable unconstrained trade. All other markets must be considered as separate national markets for assessing if a proposed subsidy scheme may have negative effect on market competition. Consequently, all proposed subsidy schemes for the planned nuclear power plant projects must be assessed according to their impact on competition on power generation on national markets. Given significant output of the proposed nuclear projects and the fact that CEE power markets are already dominated by state-owned incumbents the EU Competitions authorities should find it easy to ban those support schemes.