Lots of people seem to have experienced 2016 as a terrible year, metaphysically if not personally. Today, Craig Morris signs off with his own Word of the Year for 2017.

Just in time for the new year, it’s time to take a good look at how we got here–and then spark a change (Public Domain)

Did 2016 ring in the post-factual era? “Post-faktisch” was just chosen as Germany’s Word of the Year. A few weeks ago, Trump spokesperson Scottie Nell Hughes told an astonished panel on the Diane Rehm show, “there are no such things as facts.”

Hughes’ sentiment is not new. Months before, Republican Newt Gingrich said the same thing when he gave feelings the same standing as facts. Can a society that leads the world scientifically simply decide to give up facts? One precedent is the downfall of Arab scholarship starting around the 1200s.

Up to then, the Arab world led in most scholarly fields as Europe slowly crept out of its Dark Ages. In 1258, the House of Wisdom, a library also open to non-Muslims, was destroyed when the Mongols besieged Baghdad. But long before that, the theology of occasionalism had come about; it denied any cause-and-effect relationship, explaining everything by God’s will. If I burn my finger when lighting a match, for instance, there is no guarantee it will happen again; if God so wishes, He could give my fingertip frostbite next time. If cause-and-effect becomes anathema in this way, scientific inquiry becomes irreligious.

This kind of thinking is now taking control in the US. Trump (not himself an overly religious man) says he will close NASA’s world-leading climate research for being “political.” His appointee for education secretary wants a Christian worldview in schools – in a country that already has trouble teaching evolution. Trump supporters have created their own watchlist of professors deemed too far left. But that’s not new either: the website Students for Academic Freedom (now defunct) performed the same service until recently. (Another one, Campus Watch, focuses on the Middle East alone.)

Note the irony: a group calling for freedom wants to denounce those it disagrees with. The table is often turned in this way. For some 25 years, pundits have been complaining about political correctness, a term created by people who oppose it, not any who support it. Those who don’t want to be told not to use crude language thus frame the debate as though others were oppressing them.

Repeatedly, this strategy is used successfully. It became popular during the Bush Jr. administration: “accuse your opponents of what they will accuse you of.” Psychologists know it as “projecting” – and Trump is suspected of it. Implicit behind Fox News’ motto “fair and balanced” is the accusation that other news outlets are biased. And there’s a history to projecting in US politics as well: a racial one.

For centuries, white America was preoccupied with black men impregnating white women, when in fact the opposite was common: white men impregnating black women (founding father Thomas Jefferson and, more recently, Strom Thurmond, a segregationist who served in the Senate for 48 years up to 2003, come to mind). A 17-year-old Martin Luther King wrote in 1946: “The total of race mixture in America has come, not at Negro initiative, but by the acts of those very white men who talk loudest of race purity.” Or, if you prefer humor, comedian Larry Wilmore reminded us after the elections: “mixed-race Americans were largely the result of the cream being poured into the coffee” and not vice versa. The tactic of projecting has thus always been a central part of the American character.

Fixing emissions in the transport sector means that Americans of different ethnicities will have to live next to each other. Racism played a huge role in making America dependent on cars; all-white suburbs were built so that whites could leave the inner city to blacks. Then, America rammed highways through black urban communities, breaking them up into two smaller, less pleasant zones separated by a giant road. So yes, saving the planet requires overcoming racism. But first, Americans have to learn these facts.

The Detroit Wall (spray-painted) at Alfonso Wells Park: built in 1940, it made the white neighborhood on this side separate from the black neighborhood on the other enough to be eligible for federal housing funding, which was not offered for mixed-race projects — nationwide. (Photo by Craig Morris in 2016)

Americans outside the South will have to get used to seeing racism as American, not just southern. Remember the first line of “Strange Fruit,” which Time Magazine chose as Song of the 20th Century? “Southern trees bear a strange fruit” – it was written after a songwriter saw this photo (and you may prefer not to click on that link) of a lynching in Indiana. Why would he then speak of the south if the lynching took place in the north? For the same reason his confusion is still not common knowledge: Americans cannot face the truth about the central role of racism in everything. So sorry, America, you didn’t just recently become post-factual.

The good news is: we can start changing things now, and we don’t need the federal government’s help. Decent Americans (the majority) are eating a big humble pie for Christmas this year; gone are the days of American exceptionalism. That’s wonderful; humility is prerequisite for decency.

There is a lot of talk about a Truth and Reconciliation Commission for the US these days, generally based on the South African model. The German model of Vergangenheitsbewältigung (dealing with the past) currently seems more promising, since Trump is unlikely to support an official commission as in South Africa.

Around the late 1960s, young Germans began asking their parents what they had done during the Nazi era. There was never any official investigation, just an ongoing national conversation, arguably reaching a pinnacle in the Historikerstreit (a dispute among historians) in the 1980s. My favorite example of the grassroots conversation to never forget (no, not that one, this one) came later, however: the Stumbling Stones (Stolpersteine) art project consists of small bronze plaques inset in-between cobblestones, marking the place where a victim of Nazism last lived. They have gone all over Europe, and it is a true grassroots campaign – 50,000 stones and counting! Imagine a similar campaign in the US to put a memorial up wherever anyone had been lynched in the US, or a sign in every town that had been a sundown town. Today, Germans deal with their own such “inconvenient truths” frankly, openly, and calmly.

If you think I’m exaggerating about the need for Vergangenheitsbewältigung for climate policy, listen to what Michael Sladek, a leading grassroots campaigner in the Energiewende since the mid-80s, recently said at one of my presentations: “I had asked my parents what they had done against the Nazis, so I wanted to have an answer if my kids ever asked me what I had done about nuclear power and climate change.” Lots of the campaigners from the 70s and 80s have told me that “dealing with the past” drove them to fight for the Energiewende.

To bolster the conversation in the US, you don’t need to get rid of the electoral college (created, incidentally, for slavery) or reform campaign finance beforehand. Gerrymandering doesn’t have to be done away with first, and it doesn’t matter much who’s president. There’s nothing stopping us at all.

Indeed, there has thus never been a better time to further this awareness-raising. When Trump voters realize the Republicans have betrayed them in epic fashion, a giant – and dangerous – emptiness will fill American society. We must be prepared to fill it with a longing for fairness and a common purpose.

The alternative is far less savory. Ironically, Trump’s administration seems poised to turn America into the kind of society it depicts the Arab world as: one of intolerance, hate, and fundamentalism trumping open debate – this in the wake of the Arab Spring of citizens in those countries calling for more democracy!

Do Trump and his followers complain about the Arab world so much because they want America to adopt the very aspects of it they decry? That would be the tactic I mentioned above: accusing others of doing something so that you can get away with it better yourself. “Projecting”: let’s make it Word of the Year in 2017! 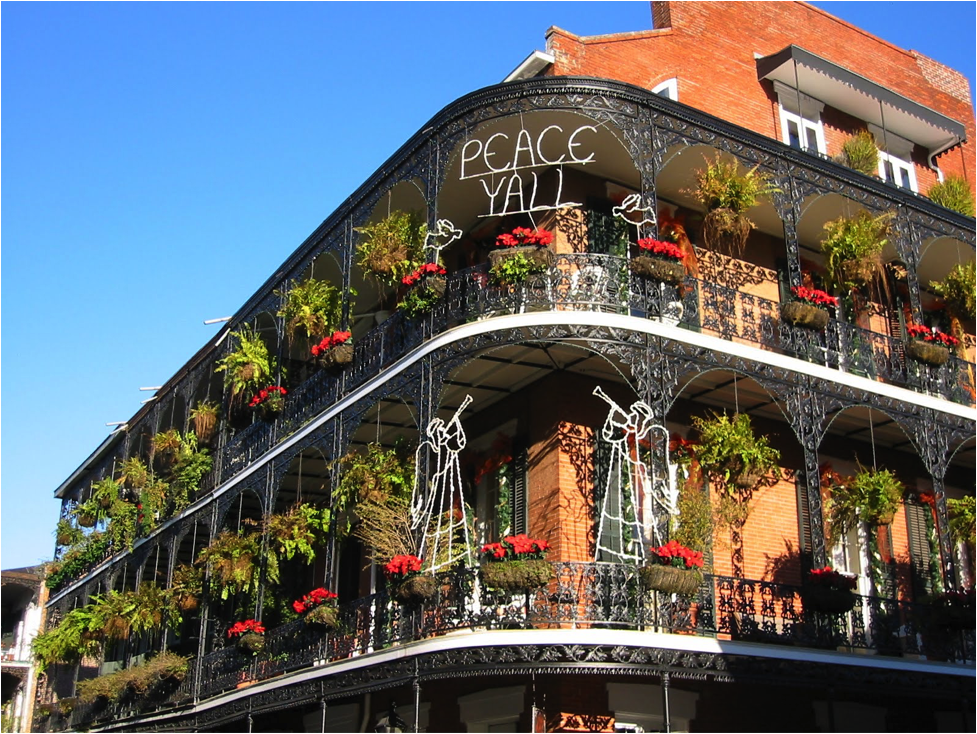 A building in the French Quarter, New Orleans (my home town), decorated for the holidays – in a city with “very few physical markers commemorating” its racial history. (Photo: Craig Morris)