Europe’s global strategic interests have become inseparable from managing climate risk and the global Energy Transition, write Luca Bergamaschi, Nick Mabey, Jonathan Gaventa and Camilla Born of the independent climate and energy think tank E3G. In a new report, EU foreign policy in a changing climate, they set out how Europe can make these themes a central thread in its foreign policy.

The new energy economy is now at the heart of Europe’s security (Photo by NASA, edited).

This summer European leaders agreed on a new EU Global Strategy. Europe’s interests have fundamentally changed since the previous European Security Strategy in 2003. The prosperity, security and freedom that the previous strategy boasted about is becoming increasingly challenged. Europe is continuing to struggle to reboot growth, investment and employment after the worst financial and economic crisis since World War II. A wave of instability across the Middle East and North Africa is unleashing war, human suffering and the massive displacement of people.

Against this backdrop, it is increasingly evident that Europe’s global strategic interests have become inseparable from managing climate risk and the global energy transition. The growing urgency of delivering climate security and an orderly energy transition require a reset of EU foreign policy objectives. These issues need to have higher priority, stronger support capacity and consistent mainstreaming across all aspects of EU foreign policy.

No Security Without Climate Security

Climate change is already undermining European internal security through an upwards trend in the frequency and intensity of heat waves, droughts and flooding. Across Europe they have increased by 60% over the past three decades causing thousands of human losses and significant economic disruption. The European Commission agreed that unless action is taken now the economic cost to European cities, which host 78% of the EU’s citizens and generate 85% of its GDP, could reach over €190 billion annually by 2070.

European security could be also jeopardised by the collapse of the oil and gas producing economies. Falling demand and volatile prices are undermining the basis of stability as they are overwhelmingly dependent on oil and gas revenues to fund social spending, such as food and energy subsidies, and meeting debt repayments. Many of EU suppliers’ countries are fragile states ruled by repressive and autocratic regimes with poor records on democracy, civil rights, media freedom, development and gender equality. The ongoing support of elite groups who use fossil fuel wealth to maintain power and repress access to basic rights poses a huge problem to the credibility of European diplomacy. 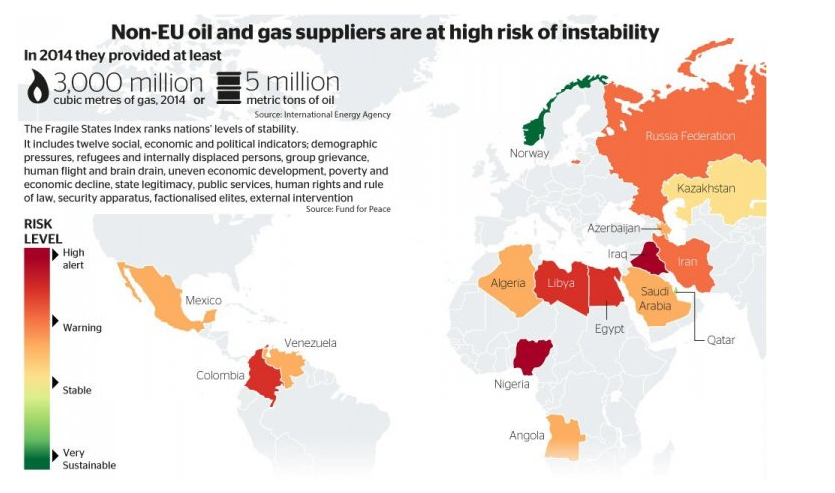 In addition, many of these countries are highly exposed to climate change impacts, which will further exacerbate existing political, economic and social instability, especially in the Middle East and North Africa. This region just suffered the worst drought in 900 years. In Syria, a record drought between 2006 and 2010 drove 1.5 million people from the country’s breadbasket areas to urban peripheries, where the first protests ahead of the civil war began. By 2040, the risk of similar 1-in-100 year food production shocks is expected to increase to 1-in-30, and 1-in-15 years in the decades after 2050.

Climate change is already acting as the “ultimate threat multiplier”, escalating the potential for conflicts over water, large-scale disruptions of food systems and related mass displacement of people. 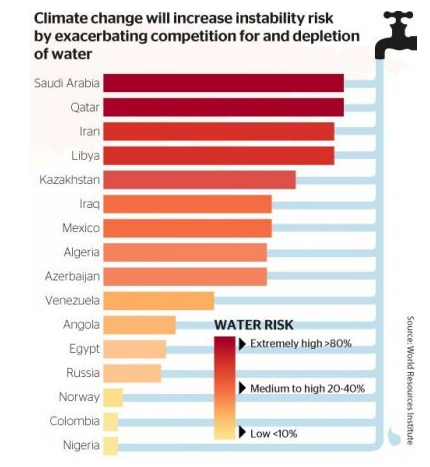 Strong clean and efficiency policies are driving a “demand revolution” across Europe. While EU GDP has grown, electricity demand has fallen 1% per year since 2010 and gas demand has fallen 22% below its peak across all sectors (power, industry and buildings) and in almost all Member States. The new energy economy is now at the heart of Europe’s energy security.

In 2013, renewables cut demand for fossil fuels by 110 Mtoe, equivalent to 9% of all fossil fuels used across the EU equal to the annual fossil fuel consumption of France.

In 2014, generation from new renewables installed over the past 10 years delivered gas savings equivalent to more than half the EU annual import capacity of Nord Stream 2 or 200% that of the Southern Gas Corridor. This led to a reduction of CO2 emissions equivalent to the yearly greenhouse gas emissions of Poland.

As Europe faces a rapid energy transition, its energy security, technological leadership and competitiveness will depend on clean investment, cost reductions, low carbon trade, and market growth to safeguard its future.

This report reminds EU leaders that if left unmanaged, climate change and a disorderly energy transition could undermine the foundations of Europe’s security and prosperity.

The Paris Agreement was a significant achievement of EU diplomacy and multilateralism. It makes us safer but not safe. Without continued efforts to increase ambitions the world risks facing temperature increases of up to 3.7°C to 2100. This level of warming risks breaching tipping points, resulting in unmanageable economic and security impacts across the globe. While the US and China are scaling up their investment in climate and energy diplomacy and cooperation, Europe is losing ground and is no longer the global engine for clean energy investment. In 2015, they shrunk by 58% compared to 2010, its weakest level since 2006. At this critical time the EU should step up commitments to stay secure and prosperous.

Managing climate risk and an orderly global energy transition must be central threads running throughout EU foreign policy. The new discussion paper “EU foreign policy in a changing climate – A climate and energy strategy for Europe’s long-term security” sets out how:

This article has been republished with permission from energypost.eu.