Wind and solar power have reached a tipping point in the US, as their prices become competitive with conventional electricity sources. Ben Paulos looks at the leaps and bounds in solar and wind, and what this means for the US energy transition.

In the cornfields of Iowa, thousands of wind turbines are spinning, supplying over 30 percent of the state’s power—the highest percentage of any US state. On especially windy days in the spring, there may be enough wind power to run the whole state.

The state’s largest utility, MidAmerican Energy—partly owned by billionaire investor Warren Buffett—aims to provide 100 per cent renewable energy. And with their plan to add another 2000 MW recently approved, they’ll be getting 85 percent of their power from renewables, mostly wind.

While that number is impressive, even more impressive is the fact that MidAmerican won’t have to raise rates to do it. Thanks to the steady decline in prices and improvement in performance, wind energy is now the cheapest source of new electricity in some parts of the US.

Solar prices, too, are falling rapidly. California is the national leader by far, in both distributed and utility-scale systems. The state is now home to 14,000 MW of solar, including over 4000 MW installed on over 400,000 rooftops. Utilities are signing contracts for solar power for as low as 3 cents per kWh.

Reports released in August by the Lawrence Berkeley Lab, as well as other industry data, are showing that wind and solar prices and performance have reached a tipping point, putting renewable energy squarely in the mainstream.

What has changed? What is driving the growth of wind and solar power?

While the price of wind turbines is certainly important to the cost of wind energy, the biggest price reductions in recent years have come from improved performance.

To understand why, let’s start with the basics. Wind energy comes from the force of moving wind. The more of that moving wind you can capture, the more energy you can produce. So turbine designers have been moving toward even longer blades. To keep the blades from hitting the ground, and because the wind blows faster higher off the ground, designers have been making the towers taller too.

Bigger is definitely better. According to Berkeley Lab’s wind report, the average capacity of newly installed wind turbines in the US increased 180 percent since 1999. The average hub height is up 47 percent and the average rotor diameter is 102 meters, up 113 percent.

Taller towers and longer blades were intended to make wind power viable in areas with lower wind speeds, like the US Southeast. But developers quickly discovered that if they put these new machines in windy areas they would get even better performance. As a result, the standard performance rating, called the “capacity factor,” has risen steadily.

Better performance from bigger machines has resulted in lower electricity costs. For projects in the US interior’s wind belt, contract prices fell from $ 55 per MWh in 2009 to about $ 20 per MWh today. That’s about 2 cents per kWh, lower than the operating cost of many existing power plants.

Of course, that includes the effect of the federal production tax credit. Currently at 2.2 cents per kWh, it is slated to phase out by 2020. 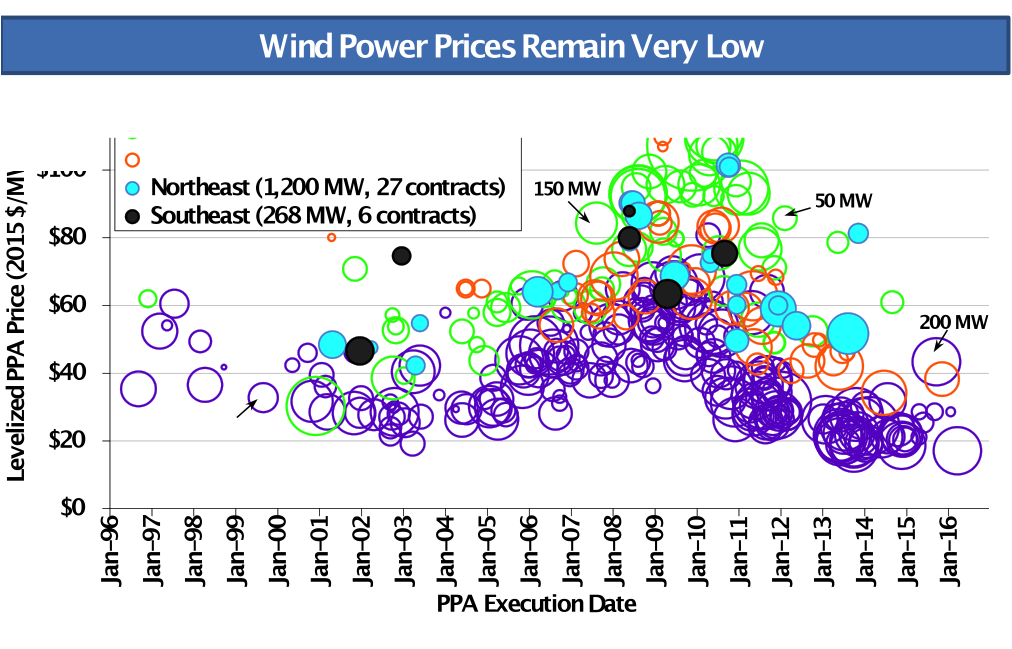 Solar power has its own cost drivers, but it is similar to wind in one respect: the cost of the solar panels themselves is no longer the most important aspect.

Because panel prices have fallen so low—only 80 cents per watt—they now make up only one-fifth of the total cost of a residential rooftop system. Some of the costs are in the other hardware, like racks and electronics. But especially expensive are the “soft costs”—all of the other things needed to get those panels on your roof, like marketing, acquiring customers, and getting permits.

Another Berkeley Lab study in 2012 rang the alarm on soft costs by pointing out that solar power in Germany—cloudy, cold Germany—was much cheaper than in the US. Thanks to the maturity of the market, the efficiency of the installers, and a process that was light on government red tape, a residential PV system in Germany was only $ 2.51 per watt in 2012, compared to $ 5.52 in the US.

Since then, soft costs have been a priority for the US Department of Energy’s SunShot initiative, a multi-year effort with the goal of getting solar to $ 1 per watt. SunShot has been helping local communities streamline their permitting processes, among other projects.

According to data from Berkeley Lab and from GTM Research, the US is well on its way to meeting the SunShot target. Utility-scale project prices have fallen by nearly 60 percent since the 2007-2009 period, to $ 2.70 per watt. The lowest-priced projects have been around $ 1.70 per watt. Residential solar prices have fallen to $ 4.10 in 2015, less than half of the 2009 prices. Big rooftop commercial systems, like on warehouses, averaged only $ 2.50.

In both cases, module prices have flattened out over the past few years, so the gains have come from other hardware and soft costs. But with US solar prices still more than double those in Germany and Australia, there is room for improvement. Some of that improvement is coming from better performance.

Utility-scale solar plants are increasingly using tracking systems that follow the sun across the sky, thus increasing output. Power contracts signed for new systems in 2015 were at or below $ 50 per MWh, with some as low as about $ 30 per MWh.

Overall, the US has 29.3 GW of solar installed, according to GTM Research. Utility-scale solar has been the fastest growing segment for the past few years, accounting for over half of the 7.5 GW installed in 2015.

California continues to dominate the market, with about half of all solar as of the end of 2015. But that share has been falling as other states grow.

Some US neighborhoods are seeing very high levels of saturation. In San Diego County, one in eight single family homes has solar, with some zip codes boasting double that rate. Hawaii, with very high electricity prices and excellent sunshine, has more solar power per capita than any state. In 2014, 6 percent of the state’s power came from the sun, and 17 percent of homes sported solar panels.

While this growth has been impressive, all signs point to even greater growth in coming years. At the end of 2015, there were at least 56.8 GW of utility-scale solar plants waiting to be interconnected across the nation, enough to triple current levels. And wind is expected to see at least 8 GW of growth per year: in the Midwest alone, there are 29 GW of wind projects waiting to be connected. We can expect to see even better, cheaper wind and solar soon.

Bentham Paulos is an energy consultant and writer based in California. His views are his own, and don’t necessarily represent those of any of his clients.