A Ukrainian Energiewende could go a long way to resolving the current geopolitical crisis around the country, writes Oleg Savitsky of the National Ecological Centre of Ukraine in a new report for the Succow Stiftung. According to Savitsky, it would reduce Ukraine’s dependence on Russian gas and uranium as well as on coal from the breakaway regions, while at the same time reducing pollution, greenhouse gas emissions and the risk of a nuclear disaster. It would also help to combat corruption and usher in economic growth and a more equitable society. Savitsky calls on the EU and Germany to set up a “Marshall Plan” to bring about a Ukrainian energy transition, rather than trying to maintain Ukraine as a failed gas transit state.

Oleg Savitsky, a climate and energy campaigner, has written a devastating analysis of the current state of the Ukrainian energy system for the Succow Stiftung, a German foundation working to preserve the natural heritage in Eastern Europe (the former Soviet bloc). Currently, Ukraine’s power capacity is dominated by thermal power plants (49%) and nuclear plants (27%). 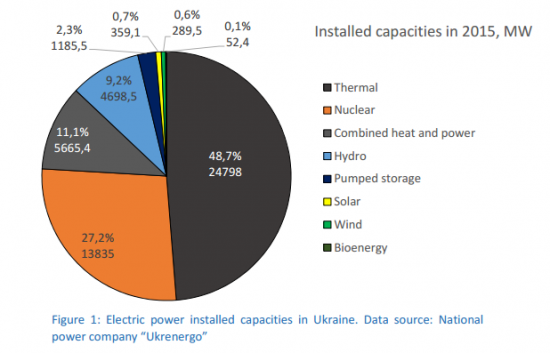 A number of these nuclear plants operate well beyond their designed lifetime and represent a threat to the entire European continent, notes Savitsky. Ukraine is of course the home of Chernobyl, the scene of the worst nuclear accident ever to happen in Europe. For their operation, the Ukrainian nuclear plants also depend partially on Russian uranium.

Ukraine’s coal capacity was mostly commissioned in the 1960s and lacks even basic pollution control, writes Savitsky: “Under EU regulations, most, if not all of coal plants, would not be permitted to operate due unacceptable levels of pollution. Still, a number of them are supplying electricity for exports to the EU.”

What is more, Ukraine obtains most of its coal from the breakaway regions in the East that are now under Russian control. “While gas and nuclear dependences have been weakened thanks to reverse gas flows from Europe and new supplies of nuclear fuel from Westinghouse Corporation, coal dependence is only aggravating and needs to be addressed as soon as possible”, notes Savitsky. “Every ton of coal supplies from non-controllable territories is feeding corruption in Ukraine and handing cash to terrorist regimes in noncontrolled territories, motivating them to use forced labor in make-shift coal mines and aggravating the perilous situation with human rights in Donbass region even further.”

Many of the nuclear and coal power plants need to be decommissioned in the coming years, or restructured at high cost: “By 2040 most of existing fossil-fuel and nuclear (even if they will be granted with life-time extensions) capacities in Ukraine will retire due to technical reasons.” The thermal power plants are so inefficient that they only produce power one third of the time. They have even lower load factors than the emerging renewable sources, which currently account for just 1.4% of capacity.

This by no means exhausts Ukraine’s energy problems. Ukraine’s economy is highly inefficient: the amount of energy spent to produce one dollar of GDP is three times higher than the EU-average. CO2 emissions per unit of GDP are the highest in Europe. Energy poverty is rampant. 70% of Ukrainian households are paying an unsustainably high share of their incomes for energy bills. Rising prices are only making matters worse. “Energy subsides, lack of incentives for energy efficiency improvements and abuse of consumer rights and liberties create a vicious circle of exacerbating socio-economic crisis.”

Then the electricity and gas grids need major renovations. Most of the infrastructure was built 40 to 50 years ago. In 2013 power losses accounted for 20.7 TWh or more than 50% of household consumption (41 TWh in 2013). Last but not least, Ukraine’s energy sector has major governance problems, characterised as it is by monopolisation and lack of transparency. The power supply is controlled by large, intransparent corporations or individual oligarchs.

According to Savitsky, a transition from the current dysfunctional system to one based on renewable energy would solve all of these problems at once. It would obviously reduce Ukraine’s dependence on Russian-controlled gas, coal and uranium, and thereby greatly improve the country’s security of supply.

An Energiewende would improve the economic situation of Ukrainian citizens: “Energy efficiency, in particular, not only helps promote domestic added value and increases capital investments, but also reduces energy poverty. Over the long run, the price of renewable energy will remain stable or even decrease, as there are no fuel costs for wind or solar, and equipment costs will continue to drop. The real cost of fossil fuels and nuclear will continue to increase, especially with introduction of carbon pricing, decommissioning and waste treatment surcharges, so the energy transition itself is a way of keeping energy prices in check and avoiding energy poverty.”

Energy efficiency and renewables would also pave the way for a “more equal and just society”, Savitsky points out. “Renewables offer an opportunity to switch to a large number of small generation capacities, and this distributed approach offers an opportunity for citizens and communities to get involved. Local ownership of renewables can provide great economic payback for the investing communities and reshape the energy market.”

This is not even mentioning the contribution renewables would make to improved air quality and lower greenhouse gas emissions. The unbundling of energy production from transmission and distribution, which should be part of the transition according to Savitsky, would, together with anti-monopoly legislation, provide incentives for new investment, possibly leading to thousands of new jobs. Energy efficiency measures and building renovations will also create many jobs in the construction sector.

An additional benefit of such a transition is that it would align Ukraine with EU energy policies and rules, enabling it to integrate into the EU energy market. Ukraine is a member of the Energy Community, which prepares countries for integrating their energy systems and policies with those of the EU. It puts obligations on the member states in the form of governance reforms, energy efficiency improvements and reduction of hazardous emissions. Savitsky notes that the only way Ukraine could realistically fulfill these obligations is by phasing out its centralized power generation.

For the EU Ukraine’s progress in transition to sustainable energy economy is “vitally important” for the success of the Energy Union, the ideal of a pan-European energy market. “Integrity, security and sustainability of energy supply cannot be achieved in Europe without major improvements in the energy sector of Ukraine”, Savitsky writes.

The good news is that an Energiewende in Ukraine is quite feasible. Savitsky notes that Ukraine currently needs 25 GW of peak power supply in winter time and 17 GW in the summer. This is half of the 50.9 GW in generation capacity that it has today. He expects demand growth to be limited as a result of increasing energy efficiency, the decline of obsolete energy-intensive industries and the territorial breakup of the country. In 2013 peak demand in winter time was 28 GW. 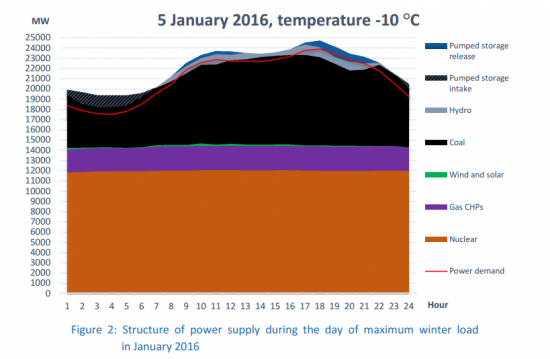 Savitsky concludes that “Ukraine’s imperiled economy does not need patching; it needs the transition to a new conceptual basis. This basis is renewable energy, technological innovation and a self-reinforcing circle of energy saving. Similarly, in late 1940s, along with technical and financial support from the US provided by the Marshall Plan, strong fiscal and anti-monopoly policies laid down the foundations for the German “Wirtschaftwunder” and economic recovery throughout Western Europe.”

He calls on the European Commission and the EU’s individual member states, especially Germany, to “closely cooperate with Ukraine’s civil society groups and develop an ambitious economic program based on rapid rollout of energy transition in Ukraine. A carefully elaborated and transparent plan presented in Ukraine can inspire and mobilize the public and facilitate profound economic and political changes.”

Thus, the transition to renewable energy “provides the opportunity to solve the current geopolitical crisis in Eastern Europe, avoid further armed conflicts over fossil fuel extraction and supply, and build cooperative energy security mechanisms. By harnessing local renewable energy sources, Ukraine can increase its political and energy independency. The degree of international cooperation needed for this transition can act as a catalyst for cooperation in tackling other regional challenges. Finally, phasing out nuclear power would prevent potential threats of nuclear accidents and spread of radioactive materials in the region.”

Ukraine’s energy crisis can become a huge opportunity, concludes Savitsky, with “renovation of infrastructure and large-scale deployment of renewable energy creating hundreds of thousands of green jobs and becoming a basis for new economic miracle in Eastern Europe.”

Karel Beckman was editor and founder of European Energy Review (EER) from its inception in 2007 until February 2013. Karel won the 2010 Award for Excellence in Written Journalism from the IAEE for his work with EER. Over 20 years, he has built up a unique international network in the energy sector and a wide international following of readers.